Exosomes: A Forthcoming Era of Breast Cancer Therapeutics
Next Article in Special Issue

Using a visual-based clustering method on the TCGA RNA sequencing data of a large adrenocortical carcinoma (ACC) cohort, we were able to classify these tumors in two distinct clusters largely overlapping with previously identified ones. As previously shown, the identified clusters also correlated with patient survival. Applying the visual clustering method to a second dataset also including benign adrenocortical samples additionally revealed that one of the ACC clusters is more closely located to the benign samples, providing a possible explanation for the better survival of this ACC cluster. Furthermore, the subsequent use of machine learning identified new possible biomarker genes with prognostic potential for this rare disease, that are significantly differentially expressed in the different survival clusters and should be further evaluated. 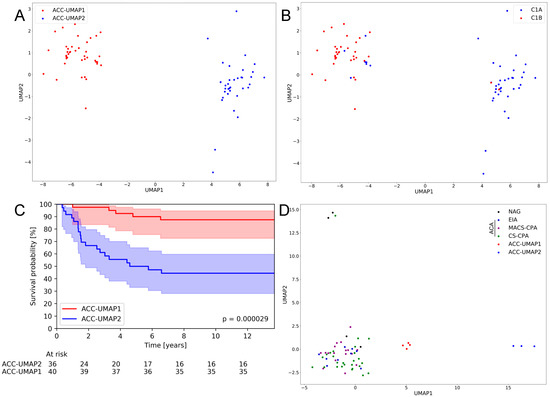