TP53 Mutation as a Prognostic and Predictive Marker in Sarcoma: Pooled Analysis of MOSCATO and ProfiLER Precision Medicine Trials
Previous Article in Journal

Blockade of HVEM for Prostate Cancer Immunotherapy in Humanized Mice

Current immune checkpoint inhibitors have shown limitations for immunotherapy of prostate cancer. Thus, it is crucial to investigate other immune checkpoints to prevent disease progression in patients with prostate cancer. Here, we first show that the HVEM/BTLA immune checkpoint is associated with disease progression in patients. We then show that immunotherapy aimed at targeting HVEM reduced tumor growth twofold in vivo in a humanized mouse model of the pathology. The mode of action of the therapy was dependent on CD8+ T cells and is associated with improved T cell activation and reduced exhaustion. Finally, we demonstrated that HVEM expressed by the tumor negatively regulated the anti-tumor immune response. Our results indicate that targeting HVEM might be an attractive option for patients with prostate cancer.

The herpes virus entry mediator (HVEM) delivers a negative signal to T cells mainly through the B and T lymphocyte attenuator (BTLA) molecule. Thus, HVEM/BTLA may represent a novel immune checkpoint during an anti-tumor immune response. However, a formal demonstration that HVEM can represent a target for cancer immunotherapy is still lacking. Here, we first showed that HVEM and BTLA mRNA expression levels were associated with a worse progression-free interval in patients with prostate adenocarcinomas, indicating a detrimental role for the HVEM/BTLA immune checkpoint during prostate cancer progression. We then showed that administration of a monoclonal antibody to human HVEM resulted in a twofold reduction in the growth of a prostate cancer cell line in NOD.SCID.gc-null mice reconstituted with human T cells. Using CRISPR/Cas9, we showed that the therapeutic effect of the mAb depended on HVEM expression by the tumor, with no effect on graft vs. host disease or activation of human T cells in the spleen. In contrast, the proliferation and number of tumor-infiltrating leukocytes increased following treatment, and depletion of CD8+ T cells partly alleviated treatment’s efficacy. The expression of genes belonging to various T cell activation pathways was enriched in tumor-infiltrating leukocytes, whereas genes associated with immuno-suppressive pathways were decreased, possibly resulting in modifications of leukocyte adhesion and motility. Finally, we developed a simple in vivo assay in humanized mice to directly demonstrate that HVEM expressed by the tumor is an immune checkpoint for T cell-mediated tumor control. Our results show that targeting HVEM is a promising strategy for prostate cancer immunotherapy. View Full-Text
Keywords: immune checkpoint; HVEM; BTLA; monoclonal antibody; cancer immunotherapy; humanized mice; prostate cancer immune checkpoint; HVEM; BTLA; monoclonal antibody; cancer immunotherapy; humanized mice; prostate cancer
►▼ Show Figures 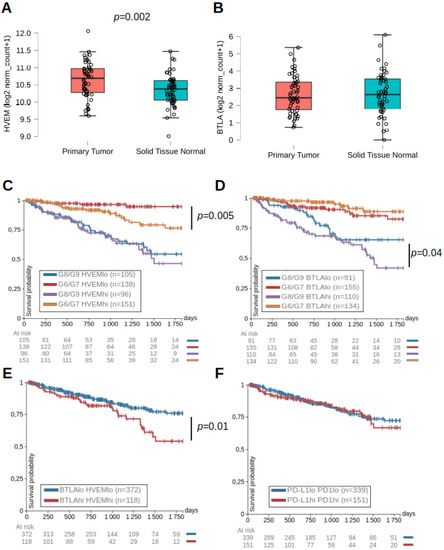