Since the recent approval of osimertinib, a third generation tyrosine kinase inhibitor (TKI) targeting EGFR in non-small cell lung cancer (NSCLC), tracing the resistance mechanisms that yield to failure of osimertinib has become of interest. As the spectrum of osimertinib-resistance related genomic alterations appears significantly more diverse compared to first and second generation TKI, comprehensive, and preferably non-invasive molecular diagnostic methods are required for the detection of resistance mechanisms. In this study, we present molecular results of 56 NSCLC patients during disease progression on first and second line osimertinib treatment using a hybrid capture (HC) next generation sequencing (NGS) based liquid biopsy approach. We show examples of polyclonal resistance development which leads to the presence of multiple resistance mechanisms in the same patient, and highlight the clinical utility of HC NGS over single gene testing.

Since 2009, several first, second, and third generation EGFR tyrosine kinase inhibitors (TKI) have been approved for targeted treatment of EGFR mutated metastatic non-small lung cancer (NSCLC). A vast majority of patients is improving quickly on treatment; however, resistance is inevitable and typically occurs after one year for TKI of the first and second generation. Osimertinib, a third generation TKI, has recently been approved for first line treatment in the palliative setting and is expected to become approved for the adjuvant setting as well. Progression-free survival (PFS) under osimertinib is superior to its predecessors but its spectrum of resistance alterations appears significantly more diverse compared to first and second generation EGFR TKI. As resistance mechanisms to osimertinib are therapeutically targetable in some cases, it is important to comprehensively test for molecular alterations in the relapse scenario. Liquid biopsy may be advantageous over tissue analysis as it has the potential to represent tumor heterogeneity and clonal diversification. We have previously shown high concordance of hybrid capture (HC) based next generation sequencing (NGS) in liquid biopsy versus solid tumor biopsies. In this study, we now present real-word data from 56 patients with metastatic NSCLC that were tested by liquid biopsy at the time of disease progression on mostly second line treated osimertinib treatment. We present examples of single and multiple TKI resistance mechanisms, including mutations in multiple pathways, copy number changes and rare fusions of RET, ALK, FGFR3 and BRAF. In addition, we present the added value of HC based NGS to reveal polyclonal resistance development at the DNA level encoding multiple EGFR C797S and PIK3CA mutations. View Full-Text
Keywords: liquid biopsy; lung cancer; routine diagnostics; osimertinib resistance liquid biopsy; lung cancer; routine diagnostics; osimertinib resistance
►▼ Show Figures 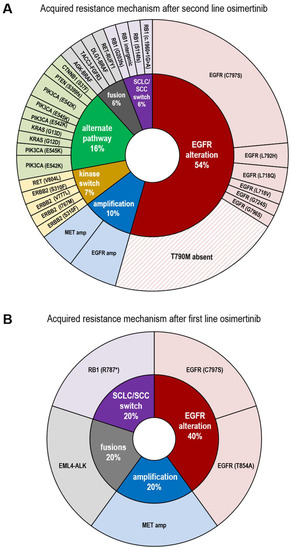