Tumors of the Central Nervous System: An Update
Previous Article in Journal

Anaplastic thyroid carcinoma (ATC) is associated with a poor prognosis due to aggressive tumor growth and high treatment resistance. Hypofractionated treatment concepts may be more effective and less time consuming compared to normofractionated radiotherapy (RT). In this retrospective study, we aim to evaluate the outcome of hypofractionated regimens and perform a systematic review concerning hypofractionated RT and pooled analysis of this treatment modality. A systematic review using the MEDLINE/Pubmed and Cochrane databases was performed. Data from all eligible studies were extracted, and a pooled analysis of literature and our cohort (n = 60) was carried out to examine patient characteristics, toxicity, and outcomes of patients with ATC. As a result, median overall survival (OS) of the single center cohort was four (range 1–12) months. Survival rates at one, three, and six months were 82%, 55%, and 36%, respectively. In univariate analyses, multimodal treatment (p = 0.006) and gender (p = 0.04) were correlated with an improved OS. Six studies with a total number of 152 patients undergoing hypofractionated RT treatment were analyzed. The pooled analysis included four patient cohorts with 60 patients and showed median OS of 5.3 (range: 1–24) months. Multimodal treatment (p < 0.001) and a cumulative radiation dose ≥50 Gy in equivalent dose in 2 Gy fractions (EQD2) (p = 0.014) correlated with an improved OS. On multivariate analysis, multimodal treatment (p = 0.003, hazard ratio (HR): 0.636, 95% confidence interval (CI): 0.469–0.861) was an independent predictor for longer OS. After propensity score matching (PSM), hypofractionated RT appears to be non-inferior compared to normofractionated RT concerning OS. In conclusion, hypofractionated RT is effective with manageable toxicity. A dose escalation with ≥50 Gy (EQD2) correlated with a longer OS. Hypofractionated RT could be an integral part in multimodal treatment with a promising outcome. View Full-Text
Keywords: ATC; anaplastic thyroid cancer; hypofractionated; irradiation; survival ATC; anaplastic thyroid cancer; hypofractionated; irradiation; survival
►▼ Show Figures 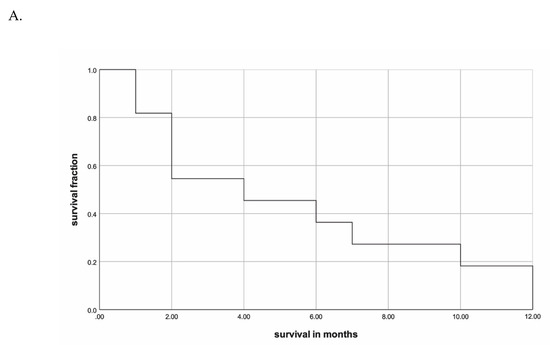