The Roles of ROS Generation in RANKL-Induced Osteoclastogenesis: Suppressive Effects of Febuxostat

Monoclonal Gammopathies of Renal Significance: Renal Biopsy and Beyond

Monoclonal Gammopathies of Renal Significance (MGRS) are a rather heterogeneous group of renal disorders caused by a circulating monoclonal (MC) immunoglobulin (Ig) component, often in the absence of multiple myeloma (MM) or another clinically relevant lymphoproliferative disorder. Nevertheless, substantial kidney damage could occur, despite the “benign” features of the bone-marrow biopsy. One example is renal amyloidosis, often linked to a small clone of plasma cells, without the invasive features of MM. However, patients with amyloidosis may present with a nephrotic syndrome and renal failure, eventually leading to end-stage kidney disease. At the same time, other organs, such as the heart and the liver, may be severely damaged by Ig light chains or amyloid deposits, occasionally resulting in fatal arrhythmias and/or organ failure. Acute kidney injury (AKI) may as well result from massive excretion of MC proteins, with deposition disease in glomeruli or renal tubules, not rarely obstructed by luminal aggregates, or “casts”. Proliferative glomerulonephritis with monoclonal Ig deposits is another, less frequent clinical presentation of an MGRS. The present review deals with the implications of MGRS for renal function and prognosis, and the potential of tools, such as the renal biopsy, for assessing clinical risk and guiding therapy of the underlying condition. View Full-Text
Keywords: monoclonal gammopathies; myeloma; immunoglobulins; light chains; amyloidosis; kidney; renal biopsy monoclonal gammopathies; myeloma; immunoglobulins; light chains; amyloidosis; kidney; renal biopsy
►▼ Show Figures 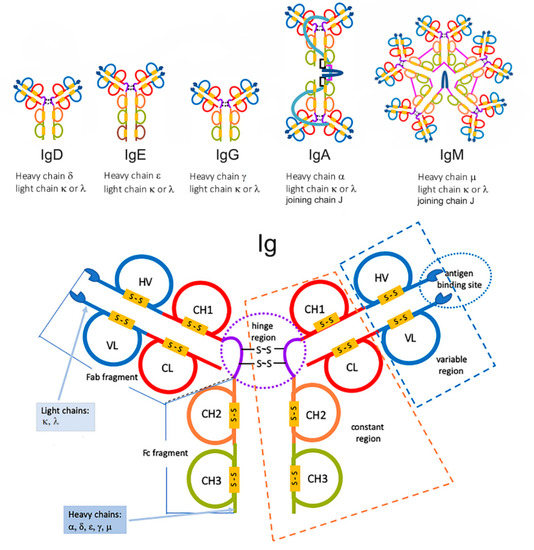