Role of Colposcopy after Treatment for Cervical Intraepithelial Neoplasia

Colposcopy is often used in follow-up after treatment for cervical intraepithelial neoplasia (CIN) despite its marked inter-observer variability and low sensitivity. Our objective was to assess the role of colposcopy in post-treatment follow-up in comparison to hrHPV (high-risk human papillomavirus) testing, cytology, and cone margin status. Altogether, 419 women treated for histological high-grade lesion (HSIL) with large loop excision of the transformation zone (LLETZ) attended colposcopy with cytology and hrHPV test at six months. Follow-up for recurrence of HSIL continued for 24 months. Colposcopy was considered positive if colposcopic impression was recorded as high grade and cytology if HSIL, ASC-H (atypical squamous cells, cannot exclude HSIL), or AGC-FN (atypical glandular cells, favor neoplasia) were present. Overall, 10 (10/419, 2.4%) recurrent HSIL cases were detected, 5 at 6 months and 5 at 12 months. Colposcopic impression was recorded at 407/419 6-month visits and was positive for 11/407 (2.7%). None of them had recurrent lesions, resulting in 0% sensitivity and 97% specificity for colposcopy. Sensitivity for the hrHPV test at 6 months was 100% and specificity 85%, for cytology 40% and 99%, and for margin status at treatment 60% and 82%, respectively. While the hrHPV test is highly sensitive in predicting recurrence after local treatment for CIN, colposcopy in an unselected population is not useful in follow-up after treatment of CIN. View Full-Text
Keywords: colposcopy; CIN; follow-up; test of cure colposcopy; CIN; follow-up; test of cure
►▼ Show Figures 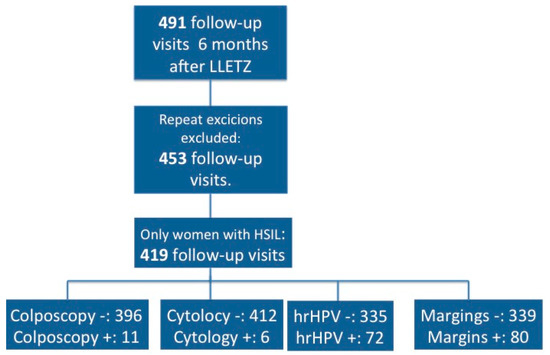