Three drug combinations, ipilimumab-nivolumab (Ipi-Nivo), pembrolizumab-axitinib (Pembro-Axi), and avelumab-axitinib (Ave-Axi), have received regulatory approval in the USA and Europe for the treatment of metastatic renal cell carcinoma with clear cell component (mRCC). However, no head-to-head comparison data are available to identify the best option. Therefore, we aimed to compare these new treatments in a first-line setting. We conducted a systematic search in PubMed, the Cochrane Library, and clinicaltrials.gov for any randomized controlled trials of treatment-naïve patients with mRCC, from January 2015 to October 2019. The process was performed according to PRISMA guidelines. We performed a Bayesian network meta-analysis with two different approaches, a contrast-based model comparing HRs and ORs between studies and arm-based using parametric modeling. The outcomes for the analysis were overall survival, progression-free survival (PFS), and objective response rate. Our search identified 3 published phase 3 randomized clinical trials (2835 patients). In the contrast-based model, Ave-Axi (SUCRA = 83%) and Pembro-Axi (SUCRA = 80%) exhibited the best ranking probabilities for PFS. For overall survival (OS), Pembro-Axi (SUCRA = 96%) was the most preferable option against Ave-Axi and Ipi-Nivo. Objective response rate analysis showed Ave-Axi as the best (SUCRA: 94%) and Pembro-Axi as the second best option. In the parametric models, the risk of progression was comparable for Ave-Axi and Ipi-Nivo, whereas Pembro-Axi exhibited a lower risk during the first 6 months of treatment and a higher risk afterwards. Furthermore, Pembro-Axi exhibited a net advantage in terms of OS over the two other regimens, while Ave-Axi was the least preferable option. Overall evidence suggests that pembrolizumab plus axitinib seems to have a slight advantage over the other two combinations. View Full-Text
Keywords: metastatic renal cell carcinoma; immune-based combination therapies; network meta-analysis metastatic renal cell carcinoma; immune-based combination therapies; network meta-analysis
►▼ Show Figures 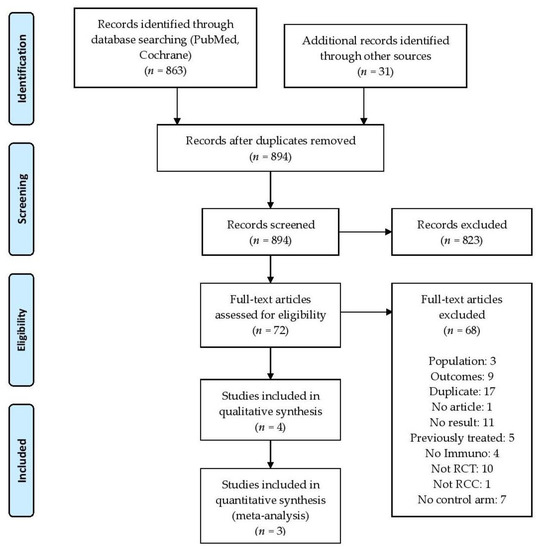