The Crosstalk between Tumor Cells and the Microenvironment in Hepatocellular Carcinoma: The Role of Exosomal microRNAs and Their Clinical Implications

T cells develop stepwise and progressive loss-of-effector functions by expressing T cell exhaustion markers or “brakes to the T cells”. The identification of T cell exhaustion markers and subsequent intense investigation in cancer immunity lead to the development of immune checkpoint inhibitors (ICIs), which have revolutionized cancer treatment. ICIs, such as anti-cytotoxic T-lymphocyte-associated protein 4 (CTLA4), anti-programmed death protein-1 (PD-1), or anti-programmed death-ligand 1 (PD-L1) antibodies, target T cell exhaustion markers and enhance antitumor immunity by reversing the exhaustion of cytotoxic T cells, also known as “taking off the brake of the T cells” [1,2,3]. Emerging evidence has revealed that anticancer efficacy of ICIs is dependent on the characteristics of the tumor microenvironment (TME), as they require functional cytotoxic lymphocytes. The TME with abundant tumor infiltrating lymphocytes (TILs), such as cytotoxic T cells, natural killer (NK) cells, and macrophage M1, is referred as “hot” or “immune-inflamed” in contrast to the “cold” TME with immunosuppressive lymphocytes, such as regulatory T cells [4]. It is conceivable that ICIs are highly effective in the “hot” TME, since the high density of TILs recognize ample tumor specific antigens with their diverse receptors. Similarly, a few predictive biomarkers for ICIs have been identified, such as a high expression of PD-L1, mismatch repair deficiency, and increased tumor mutation load [5,6,7]. Increased mutation in cancer is caused by several mechanisms, including exogenous mutagens and endogenous processes. While exogenous mutagens are consisted of exposure to UVA, UVB, or toxic substances in smoking, endogenous processes include mismatch repair deficiency and excessive Apolipoprotein B mRNA editing enzyme catalytic polypeptide-like 3 (APOBEC3) activities [8,9,10]. On the other hand, negative predictors for ICIs, so-called “immune exclusion”, have also been investigated in various cancers. Beta-catenin pathway activation or an increased CTNNB1 score resulted in T cell exclusion and demonstrated resistance to ICIs in melanomas and hepatocellular carcinomas (HCCs) [7,11]. Despite these emerging evidences, however, we continue to lack reliable predictors for ICIs in order to stratify the patients for appropriate immunotherapy based on the immune landscape.
Hepatocellular carcinoma (HCC) is the fourth-most common cause of cancer-related deaths in the world and is the most common type of primary liver tumor [12,13,14]. The prognoses of patients with advanced HCC remain dismal, despite multiple treatment options, including liver resection, thermal ablation, trans-arterial chemo or radio-embolization, liver transplant, and systemic chemotherapy with tyrosine kinase inhibitors [15,16,17]. Hence, ICIs have been recently investigated in HCCs by several clinical trials exploiting from the excellent results in other cancers [1,2,3,17,18,19]. These trials revealed that, although ICIs did achieve durable responses in a small subset of patients, the overall response rate was disappointingly low with 15–17% [3,18,19]. Additionally, although PD-L1 expression was suggested as a potential predictor of a response to ICIs in HCC, it remains imperative and in urgent need to define better biomarkers in order to identify the respondents, enabling adequate patient selection for ICIs [5,6,7,20,21,22].
Rooney et al. reported a quantitative measure of immune cytolytic activity (CYT) based on the expression levels of granzyme A (GZMA) and perforin 1 (PRF1), which were significantly upregulated with cytotoxic T cell activation [23]. Cytotoxic T cells primarily kill cancer cells using these two enzymes; perforin is an enzyme forming pores on target cell membranes, through which granzymes enter and activate caspase-independent apoptosis [23]. The density of TILs by immunohistochemistry (IHC) has been known as a strong predictor of favorable outcomes in various cancers, even before the era of ICIs, independent from tumor histology, metastatic status, or tumor stage [24,25]. However, as GZMA and PRF1 are very specific to cytotoxic T cells in heterogeneous tumor samples, CYT measures anticancer immunity through gene expression in lieu of predicting T cell function simply from the density of TILs by IHC [20,26,27]. The greatest strength of CYT is its wide availability and reproducibility without significant costs, as it requires only the RNA sequences of GZMA and PRF1 from the tumors.
Here, we hypothesized that HCCs with high CYT have stronger immunogenicity and the favorable immune TME that would result in better tumor biology and clinical outcomes.

Among the cancer genome atlas (TCGA) liver hepatocellular carcinoma (LIHC) cohort, 185 patients (49.9%) were CYT-high, and 186 patients (50.1%) were CYT-low when the cut-off was determined by the median of CYT. Gene expressions of granzyme A and perforin were distributed normally in this cohort (Figure S1a). CYT was found to be lower in HCC compared to the normal liver tissue (p = 0.019, Figure S1b). This is likely due to less stromal cells, including immune cells in the TME. In general, immune systems in cancer tissues are thought to be less active compared to the normal liver tissue. There were no significant differences in clinical demographics between CYT-high and CYT-low groups, except the presence of TILs by immunohistochemistry (IHC) (p < 0.0001, Table 1). Although the degree of cirrhosis was reported to affect immune function significantly [28], the extent of cirrhotic change of the background liver was not significantly different between the groups (Table 1). Additionally, CYT was not significantly different based on the underlying inflammation extent as well (Figure S1c). Therefore, the TCGA LIHC cohort did not contain any treatment information.

Association between the high mutation load and the highest response rate with ICIs has been observed in tumors with a high mutation burden, such as melanoma and lung cancer [1,5,6]. Cytolytic activity was reported to positively correlate with neoantigen loads and the mutation load in multiple tumor types [23]. APOBEC3 family members are mutagenic enzymes that cause DNA mutations and RNA editing in various cancers and fuel cancer heterogeneity [8,9]. Hence, we hypothesized that gene expressions of APOBEC3 members are elevated in CYT-high HCCs, leading to an increased mutation load in the TME. We found that CYT-high HCCs were associated with significantly higher expressions of APOBEC3 family members (Figure 1a). The APOBEC3 score was generated by taking the log average expression in transcripts per million (TPM) of the following molecules: APOBEC3A, APOBEC3B, APOBEC3C, APOBEC3D, APOBEC3F, APOBEC3G, and APOBEC3H. This score was also elevated in CYT-high tumors (Figure 1b; p < 0.001). Furthermore, we investigated the mutation load in the TME. Interestingly, contrary to our hypothesis, the mutation load was not different between CYT-high HCCs and CYT-low HCCs (Figure S1d; p = 0.40). This similar mutation load between the groups can be due to a relatively low overall mutation load in HCC [10]. Similar findings were observed in pancreatic cancer as well [20]. CYT-high tumors had significantly less somatic copy number alterations (SCNAs) than the CYT-low group (Figure 1c; p = 0.003), mirroring the previous report. Davoli et al. reported that high levels of SCNAs, also known as aneuploidies, were found to correlate with aggressive tumor characteristics, such as enhanced cell cycle or cell proliferations, and reduce cytotoxic immune cell infiltrations [29].

2.5. CYT was Associated with the Expression of T Cell Exhaustion Markers

Due to the favorable tumor immune microenvironment of CYT-high tumors with the higher tumor killing activity, we hypothesized that CYT-high tumors would have better survival. We found that CYT-high tumors have significantly longer PFI (median interval: 30.4 months, 95% CI (21.2–56.7), p = 0.003; Figure 5a) and DFI (median interval: 37.7 months, 95% CI (25.1– not reached (NR)), p = 0.013; Figure 5b), as well as better DSS (median survival: 84.4 months, 95% CI (70.5–NR), p = 0.026; Figure 5c) and OS (median survival: 81.9 months, 95% CI (54.1–NR), p = 0.005; Figure 5d). On multivariate analysis, high CYT remained one of significant prognostic factors for the survival of patients with HCC (Table 3). Interestingly, with further stratification based on four major T cell exhaustion marker (PD-1, CTLA4, PD-L1, and LAG3) expressions dichotomized by the median value of each marker, CYT-low/exhaustion-high groups have the worst and CYT-high/exhaustion-low groups have the best overall survivals (Figure 5e–h). We further compared OS stratified by the CYT and TCR. Patients with higher CYT demonstrated significantly longer OS regardless of TCR, most likely due to a significant correlation between the CYT and TCR (p = 0.014; Figure S3).

Both clinical and genomic data were obtained through the TCGA LIHC cohort. Clinical and copy number information were downloaded from cBioportal. Gene expression and mutation data were downloaded from the GDC legacy archive. In order to calculate the CYT, we used the transcripts per million (TPM) format of gene expression data, which is only available from the GDC portal. The RNA-seq data preprocessing and normalization method was performed as described in TCGA pipeline (https://docs.gdc.cancer.gov/Data/Bioinformatics_Pipelines/Expression_mRNA_Pipeline/). After excluding samples without gene expression data, 371 patients were utilized in the present study. There were missing clinical information in some of patients in the TCGA cohort, and we excluded them in the related analyses. As all patient information in the TCGA cohort were de-identified, the institutional review board (IRB) review was exempted.

CYT was defined as the geometric mean of GZMA and PRF1 expression values in TPM, as described previously [20,23,26,27] The threshold of dichotomization of the CYT-high and low groups was determined by the median of the CYT. There were 185 CYT-high patients and 186 CYT-low patients.

CIBERSORT and Tumor Immune Estimation Resource (TIMER) were used to estimate infiltrating immune cell composition in the TME. CIBERSORT and TIMER calculate the fraction of 22 and 8 immune cell types, such as CD8+ T cells, CD4+ T cells, B cells, macrophage M1, M2, or regulatory T cells, using RNA-seq data in each tumor tissue via online calculators (https://cibersort.stanford.edu/ and https://cistrome.shinyapps.io/timer/) [41,42,43]. Given that TIMER only calculates 8 immune cell types compared to CIBERSORT, it does not have ability to differentiate the specific immune cell types. Each immune cell fraction was compared between CYT-high (185 patients) and low tumors (186 patients) in the TCGA LIHC cohorts with the Mann-Whitney test.

Gene set enrichment analysis (GSEA) was performed between the CYT-high (185 patients) and CYT-low (186 patients) groups utilizing the annotated gene sets with the software (JAVA version 4.0) provided by the Broad Institute (https://software.broadinstitute.org/gsea/index.jsp), as described before [44,45,46,47,48]. Several collections of gene sets are available in the Molecular Signatures Database (MSigDB) (http://software.broadinstitute.org/gsea/msigdb) [49]. The primary result of the GSEA is the enrichment score (ES) and normalized enrichment scores (NES), which mirror that a certain gene set is enhanced at the top or bottom of the listed genes.

TCR richness and BCR richness values were collated from the Pan-Cancer Atlas study of Thorsson et al. [50]. TCR diversity was measured by using the number of unique complementarity determining region 3 (CDR3) cells in each sample divided by the total read count in the TCR region, which was represented as clonotypes per kilo reads (CPK) [30]. HLA-A and HLA-B are the expression levels of the HLA-A/B genes. The somatic copy number alteration (SCNA) event was defined by taking the sum of the segment mean changes ≥ 0.6 or ≤ -0.4 between the somatic and normal samples [20]. Each score was compared between CYT-high (185 patients) and low tumors (186 patients) with the Mann-Whitney test.

In conclusion, CYT-high HCC is associated with significantly improved survival with enhanced immunity and increased cytolytic activity by the CD8+ T cell and M1 macrophage. Our findings suggest that examining and identifying tumor immune microenvironments in the HCCs could stratify the patients for appropriate treatments based on their biology. 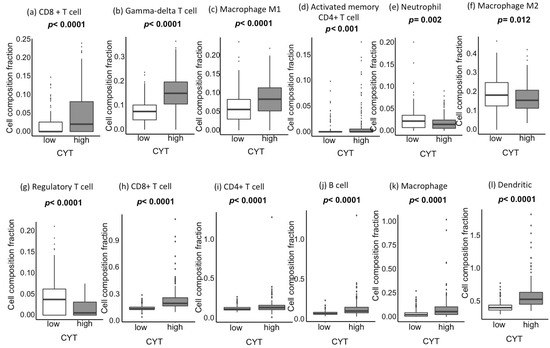 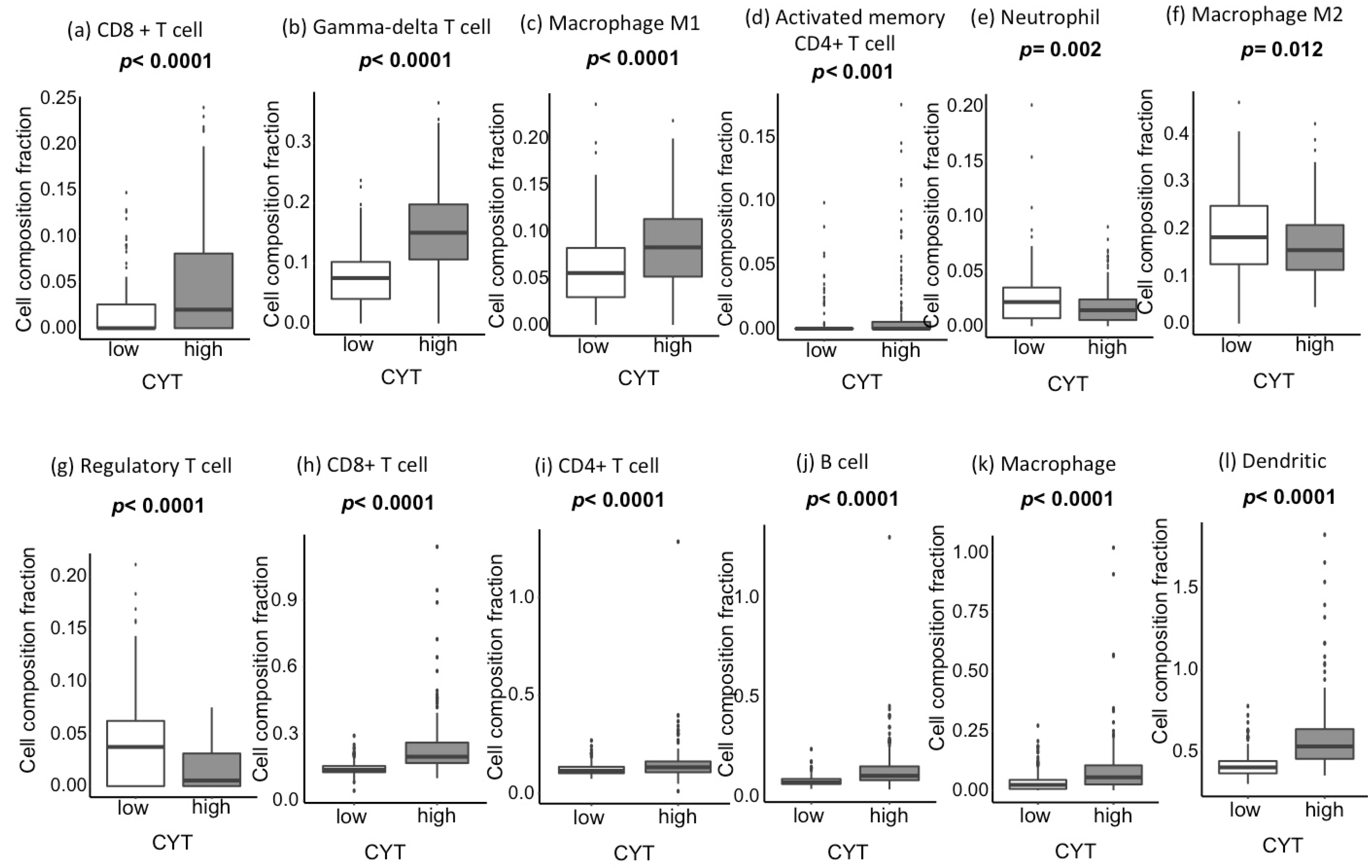 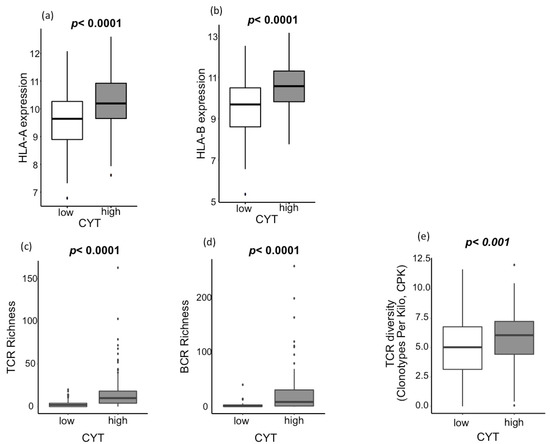 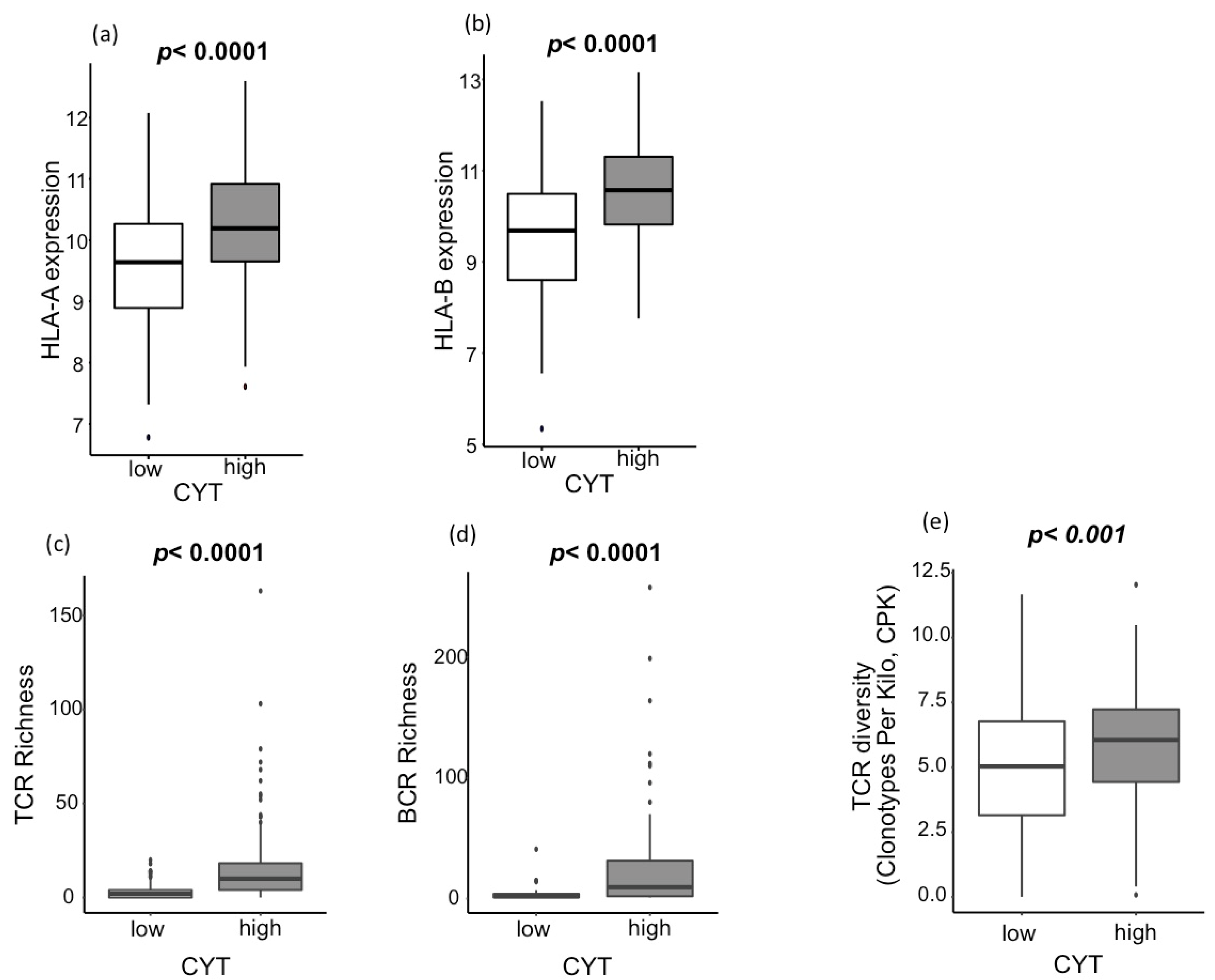 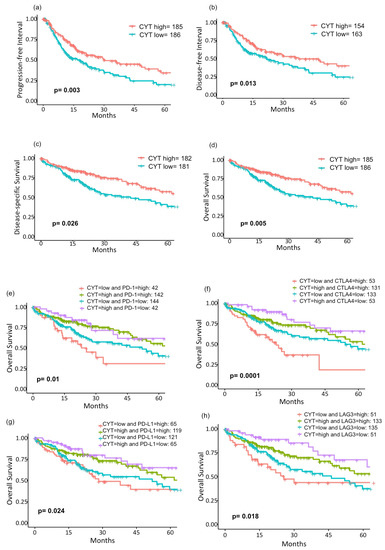 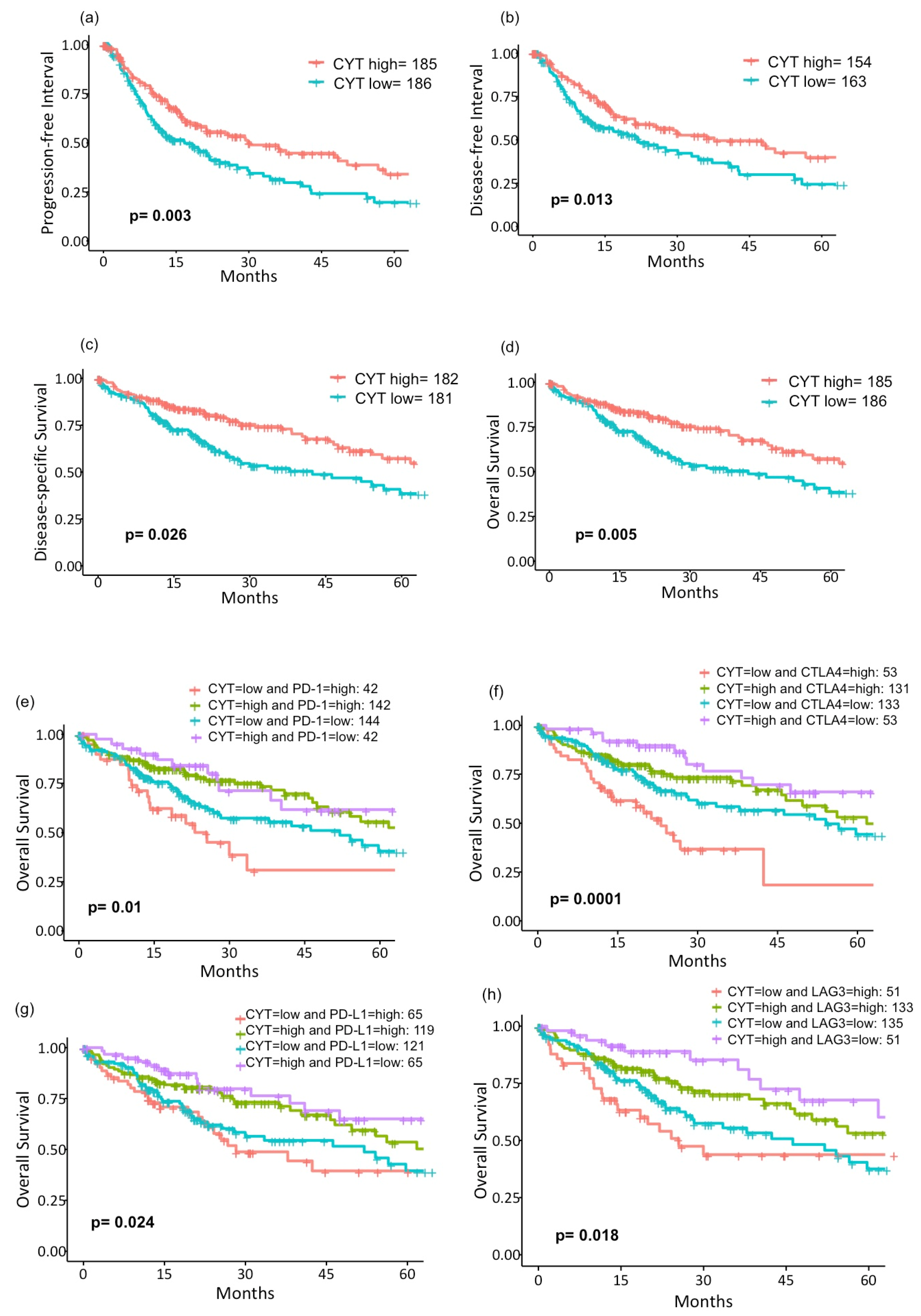 Table 3. Univariate and multivariate analysis for the OS.
Table 3. Univariate and multivariate analysis for the OS.
OS, overall survival; HR, hazard ratio; CI, confidence interval; and CYT, cytolytic activity.
© 2020 by the authors. Licensee MDPI, Basel, Switzerland. This article is an open access article distributed under the terms and conditions of the Creative Commons Attribution (CC BY) license (http://creativecommons.org/licenses/by/4.0/).
We use cookies on our website to ensure you get the best experience. Read more about our cookies here.
Accept
We have just recently launched a new version of our website. Help us to further improve by taking part in this short 5 minute survey here. here.
Never show this again