Warburg and Beyond: The Power of Mitochondrial Metabolism to Collaborate or Replace Fermentative Glycolysis in Cancer
Previous Article in Journal

Metabolic Heterogeneity of Cancer Cells: An Interplay between HIF-1, GLUTs, and AMPK

It has been long recognized that cancer cells reprogram their metabolism under hypoxia conditions due to a shift from oxidative phosphorylation (OXPHOS) to glycolysis in order to meet elevated requirements in energy and nutrients for proliferation, migration, and survival. However, data accumulated over recent years has increasingly provided evidence that cancer cells can revert from glycolysis to OXPHOS and maintain both reprogrammed and oxidative metabolism, even in the same tumor. This phenomenon, denoted as cancer cell metabolic plasticity or hybrid metabolism, depends on a tumor micro-environment that is highly heterogeneous and influenced by an intensity of vasculature and blood flow, oxygen concentration, and nutrient and energy supply, and requires regulatory interplay between multiple oncogenes, transcription factors, growth factors, and reactive oxygen species (ROS), among others. Hypoxia-inducible factor-1 (HIF-1) and AMP-activated protein kinase (AMPK) represent key modulators of a switch between reprogrammed and oxidative metabolism. The present review focuses on cross-talks between HIF-1, glucose transporters (GLUTs), and AMPK with other regulatory proteins including oncogenes such as c-Myc, p53, and KRAS; growth factor-initiated protein kinase B (PKB)/Akt, phosphatidyl-3-kinase (PI3K), and mTOR signaling pathways; and tumor suppressors such as liver kinase B1 (LKB1) and TSC1 in controlling cancer cell metabolism. The multiple switches between metabolic pathways can underlie chemo-resistance to conventional anti-cancer therapy and should be taken into account in choosing molecular targets to discover novel anti-cancer drugs. View Full-Text
Keywords: cancer metabolism; OXPHOS; HIF-1; AMPK; GLUTs cancer metabolism; OXPHOS; HIF-1; AMPK; GLUTs
►▼ Show Figures 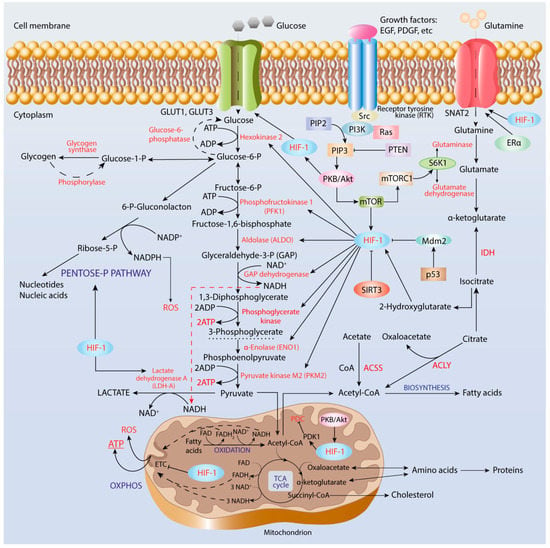