How to Classify Pituitary Neuroendocrine Tumors (PitNET)s in 2020

(1) Background. Cushing’s disease presents gender disparities in prevalence and clinical course. Little is known, however, about sexual dimorphism at the level of the corticotrope adenoma itself. The aim of the present study was to evaluate molecular features of ACTH-secreting pituitary adenomas collected from female and male patients with Cushing’s disease. (2) Methods. We analyzed 153 ACTH-secreting adenomas collected from 31 men and 122 women. Adenomas were established in culture and ACTH synthesis and secretion assessed in basal conditions as well as during incubation with CRH or dexamethasone. Concurrently, microarray analysis was performed on formalin-fixed specimens and differences in the expression profiles between specimens from male and female patients identified. (3) Results. ACTH medium concentrations in adenomas obtained from male patients were significantly lower than those observed in adenomas from female patients. This could be observed for baseline as well as modulated secretion. Analysis of corticotrope transcriptomes revealed considerable similarities with few, selected differences in functional annotations. Differentially expressed genes comprised genes with known sexual dimorphism, genes involved in tumour development and genes relevant to pituitary pathophysiology. (4) Conclusions. Our study shows for the first time that human corticotrope adenomas present sexual dimorphism and underlines the need for a gender-dependent analysis of these tumours. Differentially expressed genes may represent the basis for gender-tailored target therapy.
Keywords: Cushing’s disease; gender; gene expression profiling; neuroendocrine tumours; ACTH-secreting adenomas Cushing’s disease; gender; gene expression profiling; neuroendocrine tumours; ACTH-secreting adenomas

ACTH-secreting pituitary adenomas, i.e., Cushing’s disease, are known to occur far more frequently in women than in men [1,2] and, as we first showed some years ago [3], give rise to a somewhat different clinical course in the two sexes. In fact, men with Cushing’s disease are more likely to be younger, exhibit a more severe clinical presentation and a less favourable response to surgical as well as medical treatment [3,4,5,6,7,8,9]. Furthermore, recently identified somatic mutations in the deubiquitinases USP8 and USP48 occurs with greater frequency in women than men with Cushing’s disease [10,11], suggesting that the corticotrope adenoma itself may harbour features which contribute to gender-dependent differences in Cushing’s disease.
Little is known, however, on molecular features of ACTH-secreting adenomas from female and male patients, an avenue of research which may yield novel insights into Cushing’s disease pathophysiology and, possibly, provide the basis for tailored diagnostic and therapeutic approaches. The aim of the present study was to evaluate differences in ACTH-secreting adenomas collected from female and male patients. Our approach to gender differences was two-fold, on the one side we assessed the secretory status of corticotrope adenomas in culture, on the other we compared the gene expression profile in archival adenomatous specimens.

Data from 124 adenoma primary cultures was available. Spontaneous ACTH secretion at both 4 h and 24 h was significantly lower in cultures obtained from male compared to female patients (Table 1). Lower ACTH levels were also observed in cultures from male patients during CRH and dexamethasone incubation although the percentage change over baseline was comparable (Table 1). Basal as well as CRH- and dexamethasone-modulated POMC expression was comparable in specimens from female and male patients (Table 1).

USP8 sequencing was performed in 111 adenoma specimens and 29 proved carriers of somatic mutations; in detail, 25 adenomas out of 84 specimens tested in culture carried USP8 variants as did 5 out of 38 specimens used in microarray analysis. All variants have been previously described [10,12]. As expected, the proportion of USP8 variant carriers was greater in adenomas from female compared to male patients (32.2% vs. 4.2%, p < 0.005); in fact, only a single adenoma from a male patient presented an USP8 mutation (i.e., p.P720R); thus, no subanalysis according to USP8 variant status could be performed. We present a description of the experimental results and their interpretation, as well as the experimental conclusions that can be drawn.

One hundred fifty-three ACTH-secreting pituitary adenomas were collected during transsphenoidal surgery for Cushing’s disease. All tumours fulfilled criteria for “corticotrope adenoma” (8272/0) according to WHO 2017 Classification of Pituitary Tumours [94]; null cell and silent corticotrope adenomas were not included. The diagnosis of Cushing’s disease had been established by standard criteria [51,95]. Our specimen collection comprised 31 men and 122 women, aged from 14 to 76 years (median 40.1 years). No significant differences as regards surgical outcome and adenoma size were detected between sexes; men were slightly older than women (see Table 5). Presurgical medical treatment was reported in 12 (4 men) out of 117 patients in whom this information could be established; six patients had been treated with ketoconazole, five with cabergoline and one patient with s.c. pasireotide; all drugs had been interrupted at least 3 days prior to surgery. MIB-1 staining was <2% in all but one specimen; this adenoma presented MIB-1 index 9%, mitosis count 3 per 10 high power field and had been collected from a female patient in whom surgery proved successful. As per our previous publications [53,96,97], the presence of corticotrope cells in fresh adenoma specimens was assured by abundant ACTH secretion in culture medium [98]; as regards formalin-fixed specimens, abundant POMC and absent GH, PRL, PIT1, LHB, FSHB expression was documented by microarray analysis [13].

ACTH was measured by immunometric assay (Diasorin S.p.A. Saluggia, Italy) with all samples from a given specimen assayed in the same run. Intra-assay coefficient of variation is 7.9% and assay sensitivity 1.2 pg/mL. Given the considerable variability in ACTH adenoma concentrations [98], ACTH concentrations were normalized to number of cells per well and responses to CRH and dexamethasone expressed relative percent of secretion in wells incubated with DMEM + BSA only (control = 100%) for statistical analyses. Plated cells counts were comparable between specimens from female and male patients (138,305 ± 18,460 vs. 110,449 ± 23,372 cells per well, respectively, N.S.)

Two approaches were used to identify differences in gene expression patterns. First, we identified the expression pattern common to adenomas from either sex. Genome studio software (Illumina) was used to identify genes significantly expressed, i.e., detection p value < 0.01, in all specimens from either male or female patients and the two lists were compared for genes expressed in both or either group. Second, differential expression across all probes was analysed by Genome Studio and Limma [100]. Expression was analysed after quantile normalization and genes with Benjamini-Hochberg p < 0.05 were considered significant. Diff Scores were calculated based on p value transformation according to the difference between average signals in specimens from male and female patients with Cushing’s disease. Volcano plot [101] was used to illustrate differential expression.

RNA was obtained from formalin-fixed or fresh specimens and carried out as previously described [12,103].

The study was conducted in accordance with the Declaration of Helsinski and the protocol approved by the Ethical Committee of the Istituto Auxologico Italiano (protocol 02C102_2011 approved on 12/04/2011 and protocol 02C402_2014 approved on 4/3/2014). Informed consent for the use of secondary surgical materials was granted by patients prior to surgery.

Differences between specimens from female and male patients with Cushing’s disease were established by ANOVA, Mann-Whitney test, chi-square test or Fisher’s exact test, as appropriate, using Statview 4.5 (Abacus Concepts, Berkeley CA, USA). Significance was accepted for p < 0.05 and data is given as mean ± S.E.M.

In conclusion, our study is the first to report on sexual dimorphism in molecular and cellular features in human ACTH-secreting pituitary adenomas and provides the basis for novel, gender-dependent perspective on the pathophysiology of Cushing’s disease. Future studies on corticotrope tumours have to take sexual dimorphism into account and, possibly, identify gender-tailored therapeutic approaches. 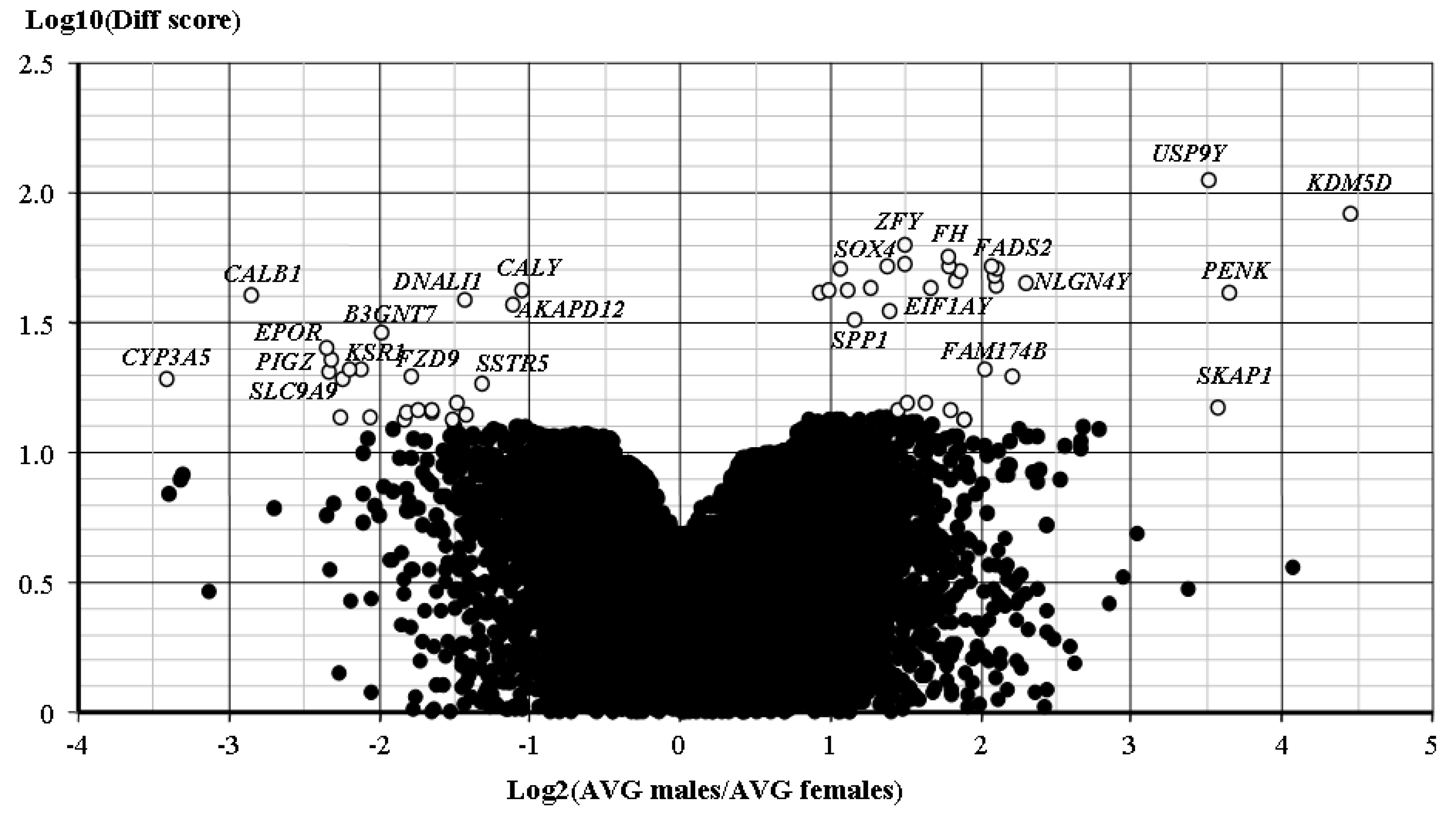