TMEFF2: A Transmembrane Proteoglycan with Multifaceted Actions in Cancer and Disease

We recently came across an intriguing protein while screening for tumour-specific apoptosis inducers. It is known as the transmembrane protein with an EGF-like and two Follistatin-like domains 2 (TMEFF2). The gene was identified and characterized by five different groups almost simultaneously around 2000. Physiological function of TMEFF2 is elusive; however, the protein is reported to be involved in wide-ranging physiological and pathological functions including neuroprotection in Alzheimer’s diseases, interferon induction and one-carbon metabolism. Moreover, the TMEFF2 promoter and 5′-upstream regions harbour a CpG island which is progressively methylated upon progression in a wide variety of cancers. Numerous primary publications suggest the methylation of TMEFF2 as a prognostic and even diagnostic marker in different cancers. The primary literature regarding TMEFF2 is distributed far and wide, and despite having more than 150 primary publications mentioning TMEFF2 (or its aliases) in the title or abstract on PubMed, a comprehensive literature review is not available. We believe the reason behind this is firstly the sheer diversity of subjects of these publications and secondly the numerous primary publications reporting contradictory information about TMEFF2, especially when it comes to its oncogenic versus the onco-suppressive roles. The interest in TMEFF2 is growing again; PubMed returning at least 60 publications mentioning TMEFF2 (or its aliases) within the last year. We have made a laborious effort and written a comprehensive review article on TMEFF2 where we have not only compiled and contextualized the information regarding it but also critically analysed the information in the major primary publications. In addition, we have proposed some answers to the apparent TMEFF2 disagreements on its function. This information could serve as a valuable tool for readers not only about TMEFF2 but also on the dual role of type-I transmembrane proteoglycans (harbouring Follistatin-like domains) in oncogenesis and onco-suppression.

Transmembrane protein with an EGF-like and two Follistatin-like domains 2 (TMEFF2) is a 374-residue long type-I transmembrane proteoglycan which is proteolytically shed from the cell surface. The protein is involved in a range of functions including metabolism, neuroprotection, apoptosis, embryonic development, onco-suppression and endocrine function. TMEFF2 is methylated in numerous cancers, and an inverse correlation with the stage, response to therapy and survival outcome has been observed. Moreover, TMEFF2 methylation increases with breast, colon and gastric cancer progression. TMEFF2 is methylated early during oncogenesis in breast and colorectal cancer, and the detection of methylated free-circulating TMEFF2 DNA has been suggested as a potential diagnostic tool. The TMEFF2 downregulation signature equals and sometimes outperforms the Gleason and pathological scores in prostate cancer. TMEFF2 is downregulated in glioma and cotricotropinomas, and it impairs the production of adrenocorticotropic hormone in glioma cells. Interestingly, through binding the amyloid β protein, its precursor and derivatives, TMEFF2 provides neuroprotection in Alzheimer’s disease. Despite undergoing extensive investigation over the last two decades, the primary literature regarding TMEFF2 is incoherent and offers conflicting information, in particular, the oncogenic vs. onco-suppressive role of TMEFF2 in prostate cancer. For the first time, we have compiled, contextualised and critically analysed the vast body of TMEFF2-related literature and answered the apparent discrepancies regarding its function, tissue expression, intracellular localization and oncogenic vs. onco-suppressive role. View Full-Text
Keywords: HPP1; TPEF; TENB2; tomoregulin; follistatin domain; circulating DNA; ectodomain shedding; interferon signalling; Alzheimer’s disease; epigenetic silencing HPP1; TPEF; TENB2; tomoregulin; follistatin domain; circulating DNA; ectodomain shedding; interferon signalling; Alzheimer’s disease; epigenetic silencing
►▼ Show Figures 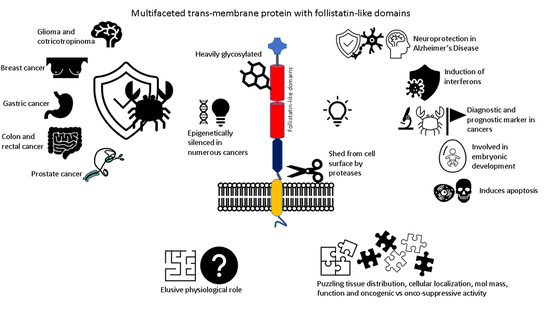