The current understanding of miRNA biology is greatly derived from studies on the guide strands and the passenger strands, also called miRNAs*, which are considered as carriers with no sense for long periods. As such, various studies alter the expression of guide strands by manipulating the expression of their primary transcripts or precursors, both of which are premature miRNAs. In this situation, the regulatory miRNA* species may interfere with the phenotypic interpretation against the target miRNA. However, such methods could manipulate the expression of two functionally synergistic miRNAs of the same precursor, leading to therapeutic potential against various diseases, including cancers. Premature miRNAs represent an underappreciated target reservoir and provide molecular targets for “one-two punch” against cancers. Examples of targetable miRNA precursors and available targeting strategies are provided in this review.

Up-to-date knowledge regarding the biogenesis and functioning of microRNAs (miRNAs) has provided a much more comprehensive and concrete view of miRNA biology than anyone ever expected. Diverse genetic origins and biogenesis pathways leading to functional miRNAs converge on the synthesis of ≈21-nucleotide RNA duplex, almost all of which are processed from long premature sequences in a DICER- and/or DROSHA-dependent manner. Formerly, it was assumed that one mature strand of the duplex is preferentially selected for entry into the silencing complex, and the paired passenger strands (miRNA*) are subjected to degradation. However, given the consolidated evidence of substantial regulatory activity of miRNA* species, currently, this preconception has been overturned. Here, we see the caveat and opportunity toward exogenously manipulating the expression of premature miRNA, leading to simultaneous upregulation or downregulation of dual regulatory strands due to altered expressions. The caveat is the overlooked miRNA* interference while manipulating the expression of a target miRNA at the premature stage, wherein lies the opportunity. If the dual strands of a pre-miRNA function synergistically, the overlooked miRNA* interference may inversely optimize the therapeutic performance. Insightfully, targeting the premature miRNAs may serve as the “one-two punch” against diseases, especially cancers, and this has been discussed in detail in this review. View Full-Text
Keywords: miRNA*; post-transcriptional regulation; premature miRNA intervention; pre-miRNA annotation; therapeutic potential miRNA*; post-transcriptional regulation; premature miRNA intervention; pre-miRNA annotation; therapeutic potential
►▼ Show Figures 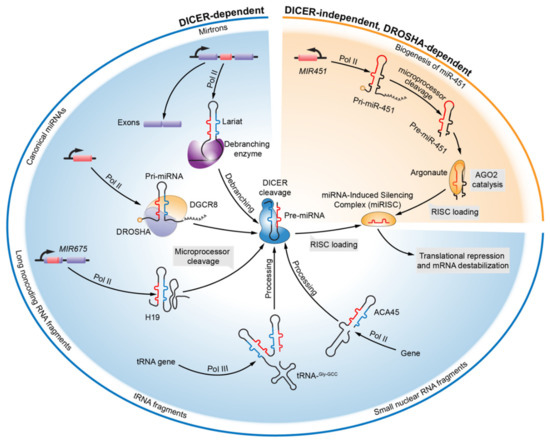