Colorectal cancer (CRC) screening by immuno-fecal occult blood tests (iFOBTs) begins at age 50 in average-risk persons. However, the incidence of early-onset CRC has risen; of the cases, at least half are sporadic CRC without a family history. The authors of this study found a high percentage of de novo germline mutation in young sporadic CRC patients, as well as in sporadic colorectal polyp and control groups. All the mutated genes contribute to various DNA-repair pathways, hinting that a loss of genomic integrity play a crucial role in the development of CRC. The early identification of cancer-susceptible individuals by multigene panels in younger individuals who may be missed under current iFOBT screening could contribute to preventing CRC.

Given recent increases in the proportion of early-onset colorectal cancer (CRC), researchers are urgently working to establish a multi-gene screening test for both inherited and sporadic cancer-susceptible individuals. However, the incidence and spectrum of germline mutations in young sporadic CRC patients in East Asian countries and, especially, in sporadic polyp carriers and normal individuals are unknown. Peripheral blood samples were collected from 43 colonoscopy-proved normal controls and from 50 polyp patients and 49 CRC patients with no self-reported family history of cancer. All participants were under 50 years old. Next-generation sequencing with a panel of 30 CRC-associated susceptibility genes was employed to detect pathogenic germline mutations. The germline mutation carrier rates were 2.3%, 4.0%, and 12.2% in the normal, polyp, and cancer groups, respectively. A total of seven different mutations in six DNA repair pathway-related genes (MLH1, BRCA1, BRCA2, CHEK2, BLM, and NTHL1) were detected in nine participants. One frameshift mutation in BRCA2 and one frameshift mutation in the CHEK2 gene were found in a normal control and two colorectal polyp patients, respectively. One young sporadic CRC patient carried two heterozygous mutations, one in MLH1 and one in BRCA1. Three mutations (MLH1 p.Arg265Cys, MLH1 p.Tyr343Ter and CHEK2 p.Ile158TyrfsTer10) were each found in two independent patients and were considered “founder” mutations. This is the first report to demonstrate high percentage of germline mutations in young sporadic colorectal polyp, CRC, and general populations. A multi-gene screening test is warranted for the proactive identification of cancer-predisposed individuals. View Full-Text
Keywords: early onset; colorectal cancer; cancer susceptibility gene; germline mutation; polyp; normal control early onset; colorectal cancer; cancer susceptibility gene; germline mutation; polyp; normal control
►▼ Show Figures 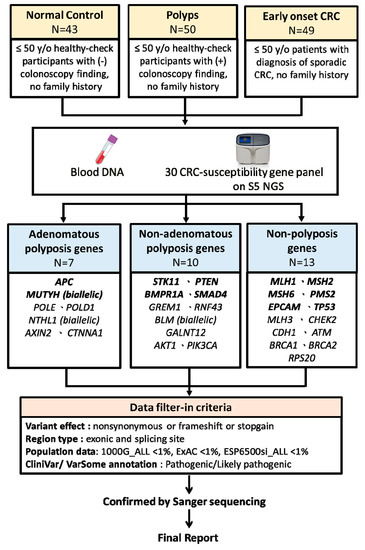