A Novel Technique to Improve Anastomotic Perfusion Prior to Esophageal Surgery: Hybrid Ischemic Preconditioning of the Stomach. Preclinical Efficacy Proof in a Porcine Survival Model
Previous Article in Special Issue

Pancreatic ductal adenocarcinoma (PDAC) is a deadly malignancy that is projected to become the leading cause of cancer death by 2050. Fibroblast growth factor receptor 4 (FGFR4) is a transmembrane receptor that is overexpressed in half of PDACs. We determined that its expression in PDAC positively correlated with larger tumor size and more advanced tumor stage, and that BLU9931, a selective FGFR4 inhibitor, reduced PDAC cell proliferation and invasion while promoting their senescence. Quercetin, a senolytic drug, induced cell death in BLU9931-treated cells. We propose that targeting FGFR4 in combination with senolysis could provide a novel therapeutic strategy in patients whose PDAC expresses high FGFR4 levels. 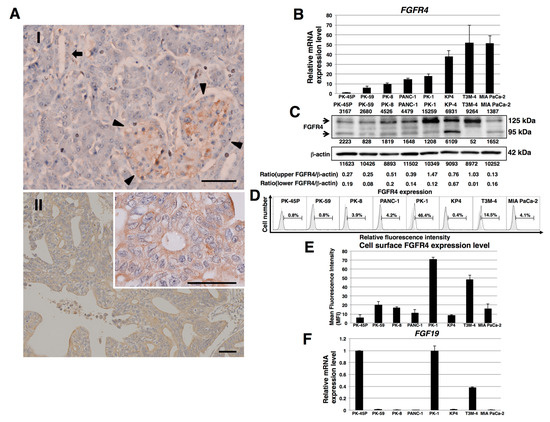