Eugene A. Woltering 2,3 and

Capecitabine and temozolomide (CAPTEM) have shown promising results in the treatment of neuroendocrine neoplasms (NEN). The aim of this study was to evaluate the outcome and role for CAPTEM in malignant neuroendocrine neoplasms. Data were obtained from NEN patients who received at least one cycle of CAPTEM between November 2010 and June 2018. The average number of cycles was 9.5. For analysis, 116 patients were included, of which 105 patients (91%) underwent prior treatment. Median progression free survival (PFS) and overall survival (OS) were 13 and 38 months, respectively. Overall response rate (ORR) was 21%. Disease control rate (DCR) was 73% in all patients. PFS, median OS, ORR, and DCR for pancreatic NENs (pNEN) vs. non-pNEN was 29 vs. 11 months, 35 vs. 38 months, 38% vs. 9%, and 77% vs. 71%, respectively. Patients with pNEN had a 50% lower hazard of disease progression compared to those with non-pNEN (adjusted Hazard Ratio: 0.498, p = 0.0100). A significant difference in PFS was found between Ki-67 < 3%, Ki-67 3–20%, Ki-67 > 20–54%, and Ki-67 ≥ 55% (29 vs. 12 vs. 7 vs. 5 months; p = 0.0287). Adverse events occurred in 74 patients (64%). Our results indicate that CAPTEM is associated with encouraging PFS, OS, and ORR data in patients with NENs. View Full-Text
Keywords: Capecitabine; chemotherapy; neuroendocrine neoplasms; temozolomide Capecitabine; chemotherapy; neuroendocrine neoplasms; temozolomide
►▼ Show Figures 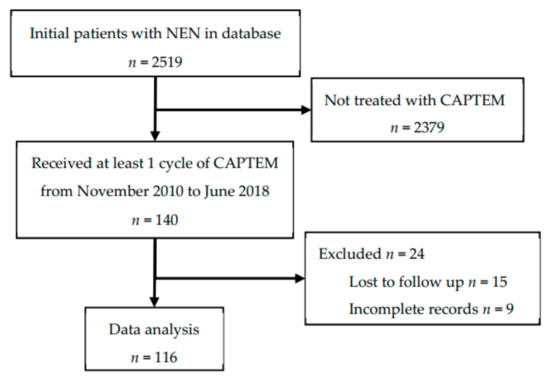