Observations on Solitary Versus Multiple Isolated Pancreatic Metastases of Renal Cell Carcinoma: Another Indication of a Seed and Soil Mechanism?
Previous Article in Journal

MALDI-MSI as a Complementary Diagnostic Tool in Cytopathology: A Pilot Study for the Characterization of Thyroid Nodules

Cytochrome P450 (CYP) 17A1 is an important steroidogenic enzyme harboring 17α-hydroxylase and performing 17,20 lyase activities in multiple steps of steroid hormone synthesis, including dehydroepiandrosterone (DHEA) biosynthesis. Previously, we showed that CYP17A1-mediated DHEA production clearly protects glioblastomas from temozolomide-induced apoptosis, leading to drug resistance. Herein, we attempt to clarify whether the inhibition of CYP17A1 has a tumor-suppressive effect, and to determine the steroidogenesis-independent functions of CYP17A1 in glioblastomas. Abiraterone, an inhibitor of CYP17A1, significantly inhibits the proliferation of A172, T98G, and PT#3 (the primary glioblastoma cells) by inducing apoptosis. In parallel, abiraterone potently suppresses tumor growth in mouse models through transplantation of PT#3 cells to the back or to the brain. Based on evidence that abiraterone induces endoplasmic reticulum (ER) stress, followed by the accumulation of reactive oxygen species (ROS), CYP17A1 is important for ER health and redox homeostasis. To confirm our hypothesis, we showed that CYP17A1 overexpression prevents the initiation of ER stress and attenuates ROS production by regulating SAR1a/b expression. Abiraterone dissociates SAR1a/b from ER-localized CYP17A1, and induces SAR1a/b ubiquitination, leading to degradation. Furthermore, SAR1 overexpression rescues abiraterone-induced apoptosis and impairs redox homeostasis. In addition to steroid hormone synthesis, CYP17A1 associates with SAR1a/b to regulate protein processing and maintain ER health in glioblastomas. View Full-Text
Keywords: CYP17A1; glioblastoma; abiraterone; SAR1 CYP17A1; glioblastoma; abiraterone; SAR1
►▼ Show Figures 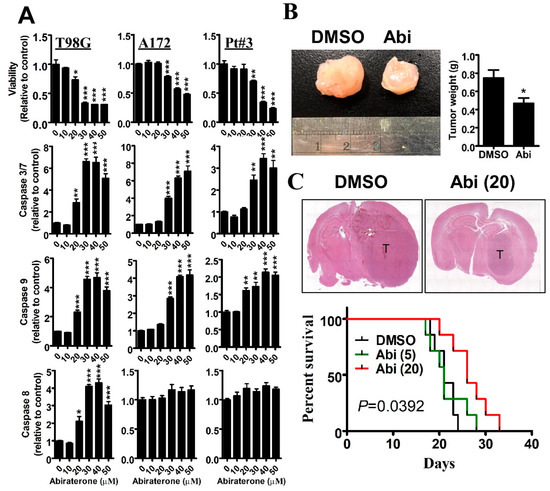