Phosphatase and tensin homolog deleted on chromosome 10 (PTEN) is a tumor suppressor gene frequently found to be inactivated in over 30% of human cancers. PTEN encodes a 54-kDa lipid phosphatase that serves as a gatekeeper of the phosphoinositide 3-kinase pathway involved in the promotion of multiple pro-tumorigenic phenotypes. Although the PTEN protein plays a pivotal role in carcinogenesis, cumulative evidence has implicated it as a key signaling molecule in several other diseases as well, such as diabetes, Alzheimer’s disease, and autism spectrum disorders. This finding suggests that diverse cell types, especially differentiated cells, express PTEN. At the cellular level, PTEN is widely distributed in all subcellular compartments and organelles. Surprisingly, the cytoplasmic compartment, not the plasma membrane, is the predominant subcellular location of PTEN. More recently, the finding of a secreted ‘long’ isoform of PTEN and the presence of PTEN in the cell nucleus further revealed unexpected biological functions of this multifaceted molecule. At the regulatory level, PTEN activity, stability, and subcellular distribution are modulated by a fascinating array of post-translational modification events, including phosphorylation, ubiquitination, and sumoylation. Dysregulation of these regulatory mechanisms has been observed in various human diseases. In this review, we provide an up-to-date overview of the knowledge gained in the last decade on how different functional domains of PTEN regulate its biological functions, with special emphasis on its subcellular distribution. This review also highlights the findings of published studies that have reported how mutational alterations in specific PTEN domains can lead to pathogenesis in humans. View Full-Text
Keywords: PTEN; PI3K; phosphatase; regulation PTEN; PI3K; phosphatase; regulation
►▼ Show Figures 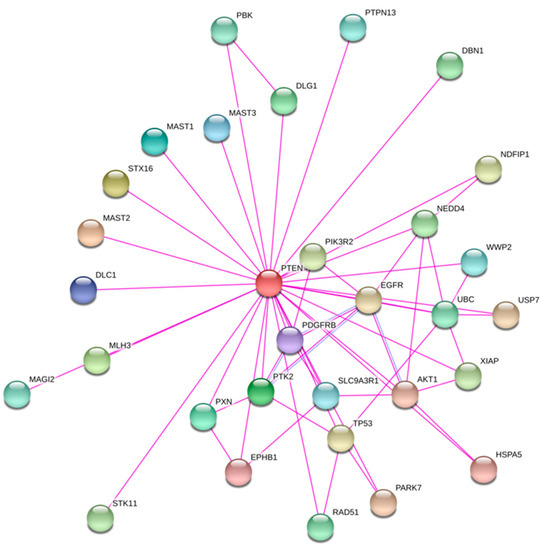