Gasdermin E (GSDME), also known as deafness autosomal dominant 5 (DFNA5) and previously identified to be an inducer of regulated cell death, is frequently epigenetically inactivated in different cancer types, suggesting that GSDME is a tumor suppressor gene. In this study, we aimed to evaluate the tumor-suppressive effects of GSDME in two intestinal cancer mouse models. To mimic the silencing of GSDME by methylation as observed in human cancers, a Gsdme knockout (KO) mouse was developed. The effect of GSDME on tumorigenesis was studied both in a chemically induced and in a genetic intestinal cancer mouse model, as strong evidence shows that GSDME plays a role in human colorectal cancer and representative mouse models for intestinal cancer are available. Azoxymethane (AOM) was used to induce colorectal tumors in the chemically induced intestinal cancer model (n = 100). For the genetic intestinal cancer model, Apc1638N/+ mice were used (n = 37). In both experiments, the number of mice bearing microscopic proliferative lesions, the number and type of lesions per mouse and the histopathological features of the adenocarcinomas were compared between Gsdme KO and wild type (WT) mice. Unfortunately, we found no major differences between Gsdme KO and WT mice, neither for the number of affected mice nor for the multiplicity of proliferative lesions in the mice. However, recent breakthroughs on gasdermin function indicate that GSDME is an executioner of necrotic cell death. Therefore, it is possible that GSDME may be important for creating an inflammatory microenvironment around the tumor. This is in line with the trend towards more severe inflammation in WT compared to Gsdme KO mice, that we observed in our study. We conclude that the effect of GSDME in tumor biology is probably more subtle than previously thought. View Full-Text
Keywords: Gsdme; Dfna5; knockout; mouse model; colorectal cancer; intestinal cancer; Apc; AOM; azoxymethane; inflammation Gsdme; Dfna5; knockout; mouse model; colorectal cancer; intestinal cancer; Apc; AOM; azoxymethane; inflammation
►▼ Show Figures 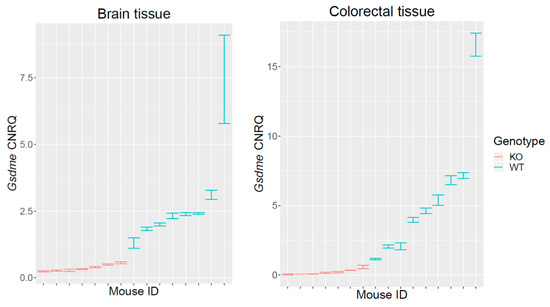