Cancer Testis Antigens and Immunotherapy: Where Do We Stand in the Targeting of PRAME?
Previous Article in Special Issue

Impact of Baseline ALBI Grade on the Outcomes of Hepatocellular Carcinoma Patients Treated with Lenvatinib: A Multicenter Study

We hypothesized that sorafenib plus transarterial chemoembolization (TACE) would confer survival benefits over sorafenib alone for advanced hepatocellular carcinoma (aHCC). We investigated this while using the population-based All-Cancer Dataset to assemble a cohort (n = 3674; median age, 60; 83% men) of patients receiving sorafenib for aHCC (Child-Pugh A) with macro-vascular invasion or nodal/distant metastases. The patients were classified into the sorafenib-TACE group (n = 426) or the propensity score-matched sorafenib-alone group (n = 1686). All of the participants were followed up until death or the end of the study. Time-dependent Cox model and the Mantel–Byar test were used for survival analysis. During the median follow-ups of 221 and 133 days for the sorafenib-TACE and sorafenib-alone groups, 164 (39%) and 916 (54%) deaths occurred, respectively; the corresponding median overall survivals (OS) were 381 and 204 days, respectively (hazard ratio, HR: 0.74; 95% confidence interval, CI, 0.63–0.88; p = 0.021). The one-year and six-month OS were 53.5% and 80.3% in the sorafenib-TACE group and 32.4% and 54.4% in the sorafenib-alone group, respectively. The major complications were comparable between the two groups. The addition of TACE to sorafenib improves survival, with a 26% reduction in mortality. These findings provide strong real-world evidence that supports this combination strategy for eligible Child-Pugh A aHCC patients. View Full-Text
Keywords: sorafenib; hepatocellular carcinoma; transarterial chemoembolization; add-on therapy; propensity analysis sorafenib; hepatocellular carcinoma; transarterial chemoembolization; add-on therapy; propensity analysis
►▼ Show Figures 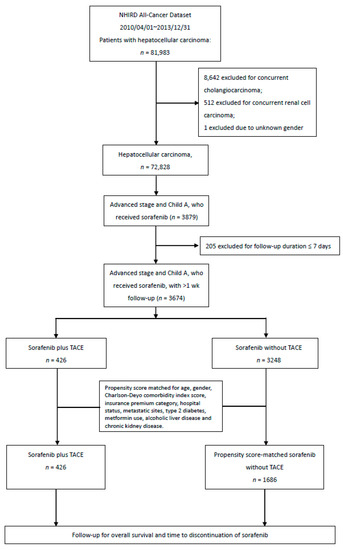