Postoperative Management in Patients with Pheochromocytoma and Paraganglioma

PGE2 is the major product of COX-2 enzyme activity. The activation of EP4 receptor by binding of PGE2 results in activation of the PI3K/Akt signalling pathway and is associated with promotion of tumour cell migration and angiogenesis [6]. To examine whether the stimulatory actions of MCF7-miR526b and MCF7-miR655 is the result of involvement of COX-2 activity or EP4-signalling, we tested both the migration (Figure 3) and tube formation (Figure 5) phenotypes of HUVECs stimulated with miRNA-conditioned media, with the addition of either COX-2 inhibitor (COX2-I, NS398), EP4 antagonist (EP4A, ONO-AE3-208), or PI3K/Akt pathway inhibitor (Wortmannin, WM).

Specifically, for MCF7-miR526b conditioned media, the addition of COX2-I or EP4A significantly inhibited migration of HUVECs at the 8 h and 24 h time points, when compared with the vehicle. (images at 24 h are shown in Figure 3C, and quantification in Figure 3D). Moreover, for MCF7-miR655 conditioned media, addition of COX2-I and EP4A significantly inhibited HUVEC migration at 24 h (images at 24 h are shown in Figure 3E and quantification provided in Figure 3F). Additional time points of migration of HUVECs with COX2-I or EP4A are presented in Figure S5.

The addition of COX2-I, EP4A, or WM to MCF7-miR655 conditioned media significantly reduced the number of both tubes and branching points formed by HUVECs at the 24 h timepoint (images at 24 h are shown in Figure 5A and quantification provided in Figure 5B,C). While COX2-I could inhibit miR655-conditioned media induced tube formation and branching formation, the addition of either EP4A or WM resulted in complete inhibition tube formation of HUVECs as early as 2 h, and we observed the same trend in all other time points compared with the vehicle. Quantitative data are presented for 2 h, 12 h, and 24 h (Figure 5B,C), and images are presented only at 24 h (Figure 5A). Images captured at other time points are provided in Figure S6.

2.5. Expression of miR526b and miR655 in Human Breast Tumour Tissue Correlated with Angiogenesis and Lymphangiogenesis Markers

We investigated miRNA expression in situ with human breast tumour tissue retrieved from Ontario Institute of Cancer Research (OICR) Tumour Bank to examine the relationship of miR526b and miR655 expression with expression of angiogenesis and lymphangiogenesis markers. We used 105 tumour tissue samples and 20 non-cancerous tissues. Demographic data of the sample are provided in Table 1 and a description of the sample has been published previously [8,10,11,21]. The majority of the tumor samples used in this study were ER and PR positive and HER-2 negative; with only 10 triple negative breast cancer samples. Moreover, this set has no stage IV tumor and only a few stage I tumor samples. Taqman gene expression (quantitative real time polymerase chain reaction; qRT-PCR) analysis was performed on cDNA produced from each sample and the relative fold change of mRNA was measured to compare control and tumour tissues. We found that the tumour samples illustrated higher expression of VEGFA (29.2 fold) than the control group (Figure 6A). The expression of both miR526b and miR655 in this sample set was quantified and published earlier [10,11]. Here, we evaluated the correlation between miRNA expression and VEGFA expression in tumour samples. Both miRNAs show a positive correlation with VEGFA, with miR526b having a correlation coefficient of R = 0.338 (p < 0.001) (Figure 6B), and miR655 having a correlation coefficient of R = 0.425 (p < 0.0001) (Figure 6C). Therefore, in both cases, VEGFA expression increases as miRNA expression increased. We previously reported the expression of angiogenesis marker CD31 in this same sample set [21]. Here, we show that the expression of both miR526b and miR655 was significantly correlated with CD31 expression, showing a positive correlation of R = 0.463 (p < 0.0001) for miR655 (Figure 6D) and R = 0.526 (p < 0.0001) for miR526b (Figure 6E).
We have previously measured lymphangiogenesis markers VEGFC and LYVE-1 expression in these tumour samples [21]. For the first time here, we report that VEGFD expression is significantly high in tumour samples compared with control tissue (Figure 7A). Expression of miR526b and miR655 in human tumour tissue was significantly correlated with lymphangiogenesis markers VEGFC, VEGFD, and LYVE-1 (Figure 7). Specifically, miR526b and miR655 were very significantly correlated with VEGFD. Not only did VEGFD show significantly higher expression in tumour samples (Figure 7A), a strong positive correlation of R = 0.7652 (p < 0.00001) with miR526b (Figure 7B) and R = 0.933 (p < 0.00001) with miR655 (Figure 7C) is observed. Furthermore, miR526b had a positive correlation coefficient of R = 0.5286 (p < 0.00001) with VEGFC (Figure 7D), and miR655 had a coefficient of R = 0.6053 (p < 0.00001) with VEGFC (Figure 7E). Expression of LYVE-1 was also positively correlated with both miRNAs, showing a positive correlation coefficient (R = 0.5256, p < 0.00001) for miR526b in Figure 7F as well as for miR655 (Figure 7G) (R = 0.3437, p = 0.001279).
Further, we investigated if there is any difference in the distribution of high miRNA expression across hormone status (Table 2). We subdivided miRNA expression according to low (+ΔCt value) and very high miRNA expression (−ΔCt value) in various tumor stages and different hormone receptor status. Both miRNA high samples were higher in proportion in ER and PR positive and HER2 negative samples; however, none of these distributions were statistically significant.

Brandon University Research Ethics Committee approves this study (#21986, 21 April 2017). The human tissues used in this project were obtained by Dr. Peeyush K Lala at the University of Western Ontario (UWO) from the Ontario Institute for Cancer Research (OICR) repository (created on the basis of donor consent) following approval of human ethics by the Ethics Review Board of the OICR and UWO. Total RNA and miRNA were extracted using Qiagen (Qiagen, Toronto, ON, Canada) RNA and miRNA extraction kits followed by cDNA synthesis at UWO, and a portion of cDNA of all samples were transferred to Dr. Mousumi Majumder at Brandon University following a material transfer agreement.

MCF7, MCF7-miR526b, and MCF7-miR655 cell lines were grown in complete serum supplemented media until 90% confluent. Cells were then washed with 1X phosphate buffered saline (PBS) to remove any trace of serum. The cells were then starved with basal MEM (serum-free) for 12 h prior to collection of media. Cell free supernatant was then collected for HUVEC functional assays.

The assay was carried out as previously described [21,34], using a 24-well plate. HUVECs were resuspended in either non-supplemented, serum free Medium 200 to serve as a negative control; MCF7 conditioned media, MCF7-miR526b conditioned media, or MCF7-miR655 conditioned media as experimental conditions; or complete serum supplemented Medium 200 to serve as the positive control. Each condition was tested in triplicate (experimental replicates) and repeated three times (biological replicates). HUVECs with each condition were then seeded on a growth factor reduced Matrigel (BD Biosciences, Mississauga, ON, Canada) coated 24-well plate. Matrigel was prepared using a 1:2 ratio with one part Matrigel and two parts un-supplemented Medium 200. Tube formation was examined at different time intervals, and images were obtained with a Nikon inverted microscope. Quantification of tubes and branching points was carried out using NIH Image J software (Version 64, NIH, Bethesda, MD, USA). To test the involvement of COX-2, EP4 receptor, and the PI3K/Akt pathway, tube formation assay was repeated with cancer cell conditioned media along with 20 µM NS398 or 50 µM ONO-AE3-208. To confirm the involvement of the PI3K/Akt signalling pathway, we also used 10 µM WM, an irreversible P13K/Akt inhibitor.

HUVECs were grown in LSGS supplemented Medium 200 in a T75 flask, then harvested and re-suspended in supplemented Medium 200, after which 300 μL of harvested cells was added in a 24-well attachment plate and maintained until 90% confluency. The surface of each well was scratched with a 2 µL sterile micropipette tip and cells were washed with PBS. Each condition was then applied to the wells. Basal Medium 200 served as the negative control, and serum supplemented Medium 200 acted as the positive control. MCF7, MCF7-miR526b, and MCF7-miR655 conditioned media were the experimental conditions. A total of 300 µL of the respective condition was added per well. To test the involvement of the EP4 and the PI3K/Akt signalling pathway, 300 µL of cell-free conditioned media from MCF7-miR526b or MCF7-miR655 was added to the wells. In another set of experiments along with cancer cell conditioned media, additionally either 20 µM NS398, 50 µM ONO-AE3-208, or 10 µM WM was added, and DMSO served as a control to test the involvement of COX-2, EP4, and the PI3K/Akt signalling pathway in cell migration. The progress of HUVEC migration and photos of the scratch wound size were captured using an inverted microscope at differing time intervals, and NIH ImageJ software was used to measure the width of the wound in pixels.

This research is funded by NSERC-Discovery grant and Brandon University Research Committee grants to Mousumi Majumder. Stephanie Hunter and Braydon Nault are recipients of NSERC-USRA scholarships.

The authors thank Bernadette Ardelli at Brandon University (BU) for giving us access to dissection microscope and the Rotor-gene PCR machine and Vincent Chen at BU for kindly allowing access to the PCR machine. We acknowledge the assistance of Patrice Colville at BU with cell culturing, RNA extraction, and qRT-PCR. We thank Ling Liu at UWO for helping us with Western blot development. We sincerely thank Peeyush K Lala at UWO for providing us with human tumour tissue from the Ontario Tumour Bank and for sharing NS398, EP4A, and WM with us. 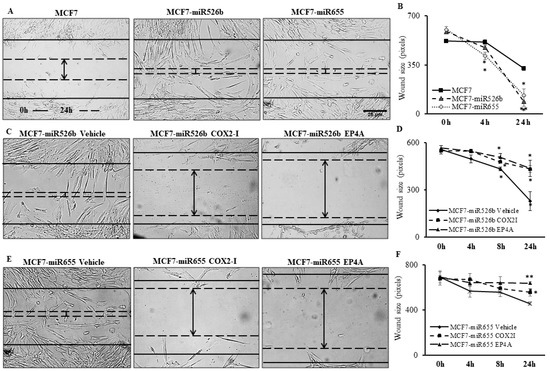 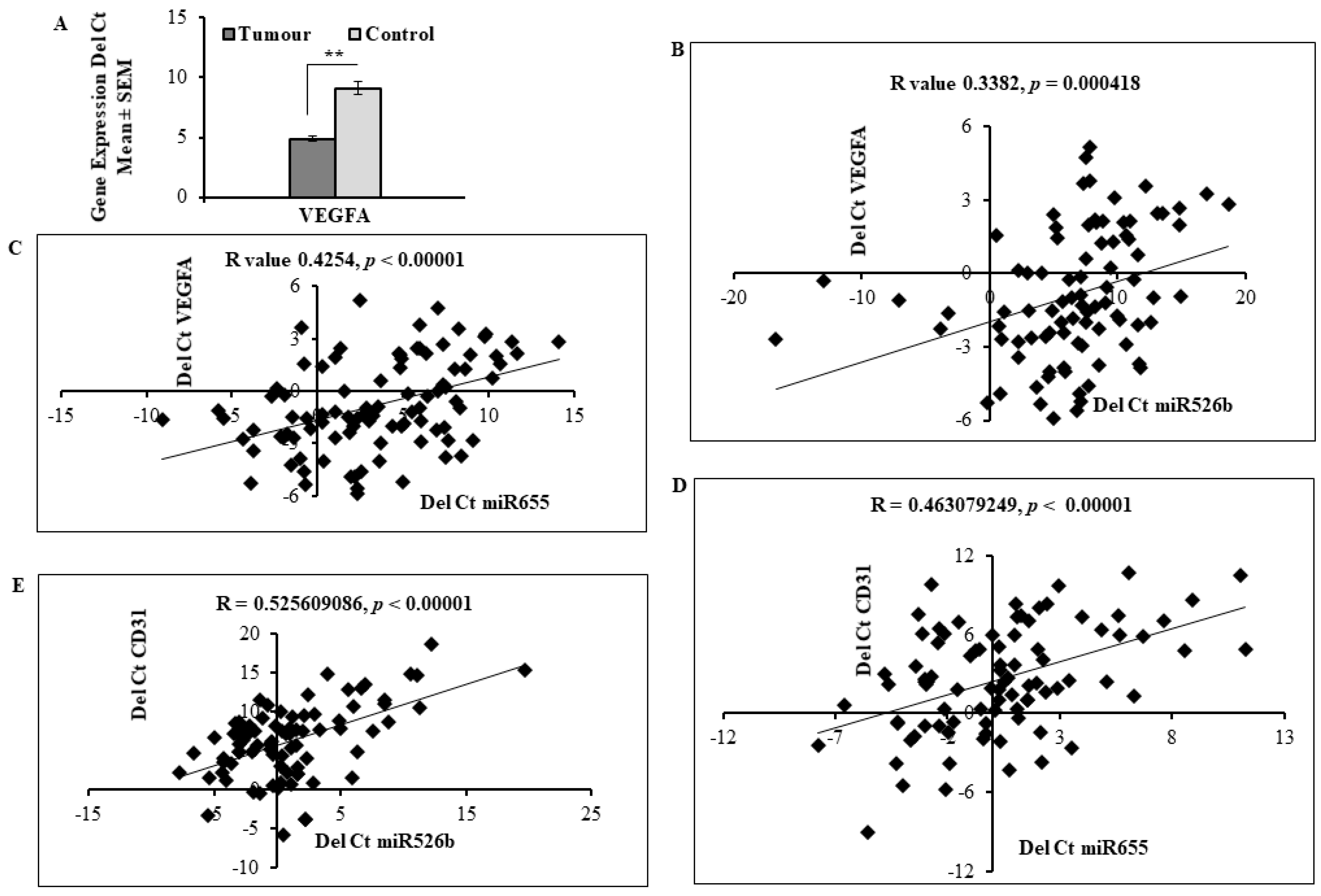 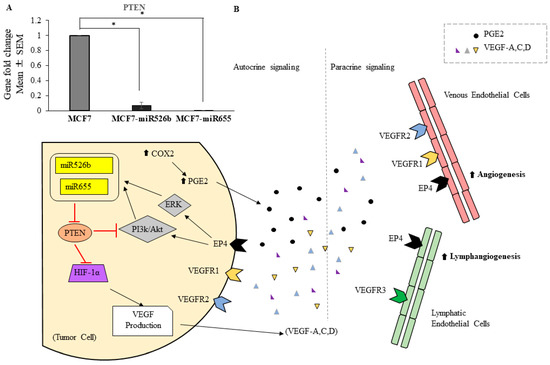