Intrahepatic cholangiocarcinoma (ICC) is one of the most lethal liver cancers. Late diagnosis and chemotherapy resistance contribute to the scarce outfit and poor survival. Resistance mechanisms are still poorly understood. Here, we established a Gemcitabine (GEM) resistant model, the MT-CHC01R1.5 cell line, obtained by a GEM gradual exposure (up to 1.5 µM) of the sensitive counterpart, MT-CHC01. GEM resistance was irreversible, even at high doses. The in vitro and in vivo growth was slower than MT-CHC01, and no differences were highlighted in terms of migration and invasion. Drug prediction analysis suggested that Paclitaxel and Doxycycline might overcome GEM resistance. Indeed, in vitro MT-CHC01R1.5 growth was reduced by Paclitaxel and Doxycycline. Importantly, Doxycycline pretreatment at very low doses restored GEM sensitivity. To assess molecular mechanisms underlying the acquisition of GEM resistance, a detailed analysis of the transcriptome in MT-CHC01R1.5 cells versus the corresponding parental counterpart was performed. Transcriptomic analysis showed that most up-regulated genes were involved in cell cycle regulation and in the DNA related process, while most down-regulated genes were involved in the response to stimuli, xenobiotic metabolism, and angiogenesis. Furthermore, additional panels of drug resistance and epithelial to mesenchymal transition genes (n = 168) were tested by qRT-PCR and the expression of 20 genes was affected. Next, based on a comparison between qRT-PCR and microarray data, a list of up-regulated genes in MT-CHC01R1.5 was selected and further confirmed in a primary cell culture obtained from an ICC patient resistant to GEM. In conclusion, we characterized a new GEM resistance ICC model that could be exploited either to study alternative mechanisms of resistance or to explore new therapies. View Full-Text
Keywords: cholangiocarcinoma; gemcitabine; drug resistance; preclinical models; gene expression profiling cholangiocarcinoma; gemcitabine; drug resistance; preclinical models; gene expression profiling
►▼ Show Figures 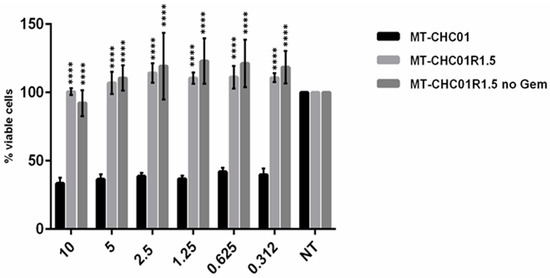