Comparative Effectiveness of Gemcitabine plus Nab-Paclitaxel and FOLFIRINOX in the First-Line Setting of Metastatic Pancreatic Cancer: A Systematic Review and Meta-Analysis
Next Article in Special Issue

Surgical resection is considered a standard therapy for malignant melanoma (MM). However, it has not yet been established as an optimal treatment strategy for gynecological MMs, particularly owing to their very low incidence rates. We retrospectively analyzed clinical outcomes of carbon-ion radiotherapy (C-ion RT) for gynecological MMs. The eligibility criterion was the presence of histologically confirmed gynecological MM. Patients with pelvic or inguinal lymph node metastases were included, while those with distant metastases were excluded. The pelvic and inguinal lymph node regions were irradiated with up to 36 gray relative biological effectiveness (Gy (RBE)) followed by a gross tumor volume boost of up to 57.6 Gy (RBE) or 64 Gy (RBE) in 16 fractions over 4 weeks. Thirty-seven patients (median age: 71 years) were examined. In total, 22 patients had vaginal tumors, 12 had vulval tumors, and 3 had cervical uterine tumors. The median follow-up periods were 23 months (range: 5–103 months) for all patients and 53 months (range: 16–103 months) for survivors. Thirty of 37 patients (81%) achieved complete tumor disappearance. The 2-year local control, overall survival, and progression-free survival rates were 71%, 53%, and 29%, respectively. C-ion RT may be a definitive treatment option for patients with gynecological MM. View Full-Text
Keywords: carbon-ion radiotherapy; gynecology; melanoma; long-term outcomes; particle beam therapy carbon-ion radiotherapy; gynecology; melanoma; long-term outcomes; particle beam therapy
►▼ Show Figures 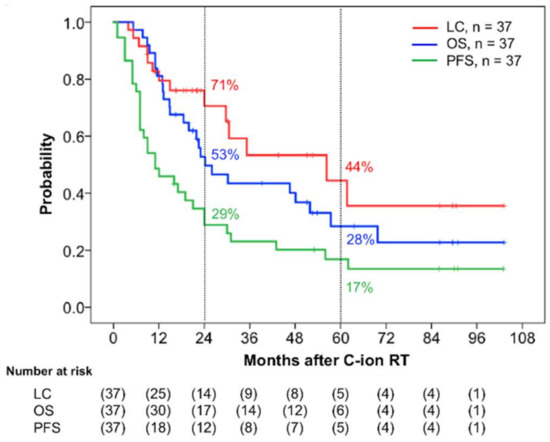