Accumulating evidence suggests a synergistic effect in cells simultaneously exposed to different types of clustered and dispersed DNA damage. We aimed to analyse the effect of mixed beams of alpha particles and X-rays (1:1 dose of each) on DNA damage response genes in human peripheral blood lymphocytes isolated from four donors. Two donors were compared upon inhibition of ATM or DNA-PK and at different sampling times. qPCR was used to measure mRNA levels of FDXR, GADD45A, BBC3, MDM2, CDKN1A, and XPC 24 h following exposure. Generally, alpha particles and mixed beams were stronger inducers of gene expression compared to X-rays, displaying saturated versus linear dose–response curves, respectively. Three out of four donors responded synergistically to mixed beams. When two donors were sampled again one year later, the former additive effect in one donor was now synergistic and no significant difference in intrinsic radiosensitivity was displayed, as determined by gamma-radiation-induced micronuclei. ATM, but not DNA-PK inhibition, reduced the radiation-induced gene expression, but differently for alpha radiation between the two donors. In conclusion, synergy was present for all donors, but the results suggest individual variability in the response to mixed beams, most likely due to lifestyle changes. View Full-Text
Keywords: DNA damage response; radiation; gene expression DNA damage response; radiation; gene expression
►▼ Show Figures 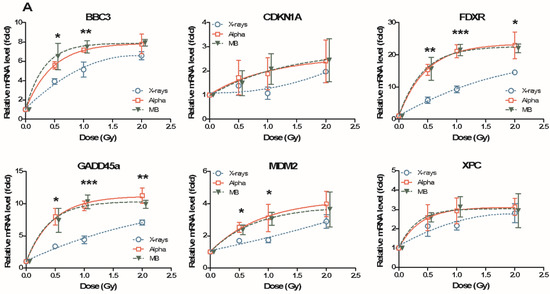