Uveal melanoma (UM) is the most common intraocular malignancy in adults and shows a high rate of metastatic spread. As randomized clinical trials with immune checkpoint inhibitors (ICI) have not been performed in patients with metastatic UM, we analyzed the real-world outcomes in a nationwide population-based study. Clinical data of patients with UM were extracted from the Danish Metastatic Melanoma database, a nationwide database containing unselected records of patients diagnosed with metastatic melanoma in Denmark. Survival before (pre-ICI, n = 32) and after (post-ICI, n = 94) the approval of first-line treatment with ICI was analyzed. A partial response to first-line treatment was observed in 7% of patients treated with anti-programmed cell death protein (PD)-1 monotherapy and in 21% with combined anti-cytotoxic T lymphocyte antigen (CTLA)-4 plus anti-PD-1 therapy. Median progression-free survival was 2.5 months for patients treated in the pre-ICI era compared to 3.5 months in the post-ICI era (hazard ratio (HR) 0.43; 95% confidence interval (CI) 0.28–0.67; p < 0.001). The estimated one-year overall survival rate increased from 25.0% to 41.9% and the median overall survival improved from 7.8 months to 10.0 months, respectively (HR 0.52; 95% CI 0.34–0.79; p = 0.003). Thus, the introduction of ICI as first-line treatment appears to have significantly improved the real-world survival of patients with metastatic UM, despite relatively low response rates compared to cutaneous melanoma. With the lack of therapies proven effective in randomized trials, these data support the current treatment with ICI in patients with metastatic UM. View Full-Text
Keywords: uveal melanoma; immunotherapy; immune checkpoint inhibitors; real-world data uveal melanoma; immunotherapy; immune checkpoint inhibitors; real-world data
►▼ Show Figures 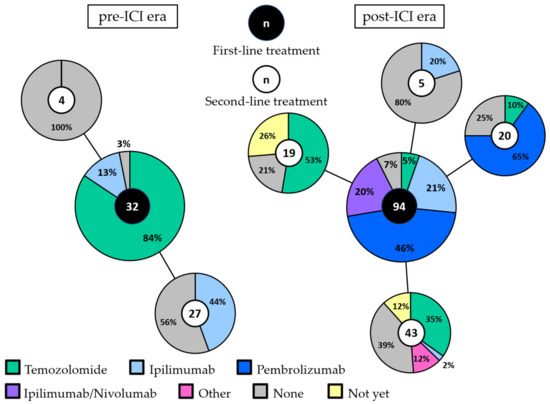