Photodynamic therapy (PDT) is a light activated drug therapy that can be used topically to treat a number of non-melanoma skin cancers (NMSC) and precancers [1]. NMSC management commonly includes surgical excision, 5-fluorouracil or cryotherapy [2]. These therapies are not always associated with excellent cosmesis and their appropriateness can be limited, depending on the location, size and number of lesions to be treated [2,3,4]. PDT uses light to activate a pre-administered drug in the presence of molecular oxygen to kill diseased cells without harming surrounding connective tissue, so that healing tends to occur without scarring [1]. It also has several advantages, including the ability to treat a whole area of field change, good lower leg healing, repeated treatment without patient resistance and excellent cosmesis in highly visible sites without advanced surgical techniques [3,4,5]. PDT can also be utilized as a treatment adjuvant [5]. Dermatological PDT has been found to be safe (with few side effects beyond treatment effects) and efficacious for the treatment of actinic keratosis (AK), superficial basal cell carcinoma (sBCC) and Bowen’s disease (BD) [3,4,5,6].
Protoporphyrin IX (PpIX) is the photosensitizer most commonly used in dermatological PDT [3]. A topical cream containing a small, soluble precursor to PpIX (e.g., 5-aminolevulinic acid (ALA) or its methyl ester, methyl-aminolevulinate (MAL)) is utilized because PpIX is relatively large and water-insoluble [1]. PpIX precursors are absorbed and enzymatically converted into PpIX over three hours by the haem biosynthesis pathway naturally present in all nucleated cells [7]. Neoplastic cells accumulate more PpIX more rapidly than normal cells because their haem biosynthesis is elevated/less well controlled, and this creates a relatively selective treatment window in which 635 nm irradiation can be applied to activate PpIX [1]. The disrupted tumor surface is also more permeable than healthy skin to the topically applied prodrug, facilitating PpIX precursor penetration [1].
PpIX also exhibits characteristic red fluorescence (at 635 nm and 700 nm) when excited by blue light (410 nm) and therefore cells accumulating PpIX can be identified through fluorescence monitoring [8,9]. Photodynamic detection (PDD) of this fluorescence can aid the identification of pre-clinical lesions in an area of field change or the margin of a poorly demarcated lesion and thus ensure that all the skin disease is properly eliminated during excision [10,11]. However, PpIX fluorescence can also now be exploited to follow the changes in PpIX concentration within the skin during PDT. Our ability to do this has been limited in the past by the poor reproducibility of results and numerous factors influencing fluorescence detection [12,13] and so historically, invasive techniques (such as chemical extraction) have been commonly utilized to determine the presence and concentration of tissue PpIX [14,15]. We therefore developed and validated [16], a non-invasive imaging system based on a commercially available piece of PDD equipment (Dyaderm, Biocam, Regensburg, Germany) [17] in order to monitor PpIX fluorescence changes in real-time during routine dermatological MAL-PDT of licensed skin lesions [18]. We found that both PpIX accumulation and photobleaching are important indicators of dermatological MAL-PDT treatment success and anything that adversely affected them had the potential to reduce treatment efficacy.

Initial analyses checked whether there were any demographic differences between the participants with complete PpIX fluorescence data ± outcome data. Table 1 indicates that no significant differences were detected for any of the demographic variables considered. Clinical outcome data was available for the majority (n = 172; 83.1%) of participants with complete fluorescence data sets, with complete clinical responses being observed in 75.6% (n = 130) of these participants at three months. Partial responses were recorded in 23.8% (n = 41) of cases and no response in one single case only (0.6%; n = 1). Mean participant age was 73.1 years, with a roughly equally gender distribution (47.1% male). Lesion type distribution was also approximately equal, with 37.2% AK, 27.3% sBCC and 35.5% BD. The majority of lesions were located on the head (39.5%), body (22.7%) and legs (24.4%), with the remainder either being acral (8.7%) or on the arms (4.7%). A considerable number of participants (n = 77; 44.8%) also utilized some form of pain relief, with the majority (93.5%) using an air cooling device (ACD).

Only 17 lesions (8.2%; 8 AK, 1 sBCC and 8 BD) in the whole data set were classified as acral (fingers and toes). Individuals with acral lesions were generally found to be of a similar age and sex distribution to those with non-acral lesions. PpIX accumulation was observed to be lower in acral lesions and PpIX photobleaching was approaching significance (p = 0.034 and 0.056 respectively) within this small data subset (Figure 4) supporting our previous observations in this respect [20].
As acral lesion numbers were limited, lesions located on the arms and legs were combined with these data and reclassified as “peripheral” for subsequent analyses. This again indicated a reduction in treatment efficacy at three months (OR: 0.5 (0.2, 0.9; p < 0.05), with lesions located on the head and main body being more than twice as likely to achieve complete clearance than peripheral lesions located on the limbs.

Seventy-seven participants (44.8%) utilized some form of pain relief, with the majority (93.5%) using ACD. Analysis indicated that there was no association between PpIX accumulation and the use of ACD (p = 0.52), however PpIX photobleaching was lower (p < 0.05). This difference did not persist when analyzed on a lesion specific basis. The use of pain relief resulted in less photobleaching of the accumulated PpIX (Figure 5) and this was also noted in sBCC alone.
The use of ACD was also associated with lower odds of achieving a complete clinical clearance at three months (OR: 0.4 (0.2, 0.7; p < 0.01), the equivalent to an approximate three-fold reduction. Adjustments for age and sex did not alter the likelihood of achieving clinical clearance but when this relationship between ACD usage and clinical outcome was considered by lesion type, BD was particularly affected and AK unaffected (AK OR: 0.8 (0.2, 2.9) p = 0.76); sBCC OR: 0.3 (0.1, 1.3) p = 0.11; BD OR: 0.2 (0.1, 0.6) p = 0.004). Participants who utilized ACD pain relief during both PDT treatments were noted to be even less likely to achieve a complete clearance (OR: 0.2 (0.0, 0.8)).

Patients attending Royal Cornwall Hospital for routine MAL-PDT for licensed indications (AK, BD and sBCC) were recruited following giving consent and with ethical approval from the Cornwall and Plymouth Research Ethics Committee. All subjects gave their informed consent for inclusion before they participated in the study. The study was conducted in accordance with the Declaration of Helsinki, and the protocol was approved by the Cornwall and Plymouth Research Ethics Committee (23/Q210/122). Patients were treated in accordance to National Institute of Health and Care Excellence guidelines [18] as part of a standard nurse-led dermatological PDT clinic. Patient age, gender, lesion type and exact lesion location were recorded. Participants had Fitzpatrick skin type I, II or III.
Any lesion crust was gently removed via curettage. MAL (Metvix®, 160 mg/g MAL, Galderma, Watford, UK) was then applied (~1 mm thick with 5 mm normal border) and an occlusive dressing applied. Three hours later, any excess MAL was wiped away and the lesion irradiated (Aktilite, Galderma, Watford, UK, 635 ± 5 nm, 37 Jcm−2, 70–100 mWcm−2) taking care to use the center part of the light array to irradiate the entire lesion plus a margin of normal surrounding skin utilizing the Aktilite spacer bar provided. Any use of pain relief was noted. After treatment, the lesion was covered with an occlusive dressing for 24 h. All lesions included in this study excepting the most superficial AK lesions [3] received two identical MAL-PDT treatments nine days apart in accordance with the routine PDT clinic schedule. This clinical decision was made by the Consultant Dermatologist who made the patient’s management plan indicating treatment with PDT in accordance with the NICE Guidelines [18].
A Consultant Dermatologist (blinded observer unaware of imaging results) clinically assessed all treatment areas at three months. Lesions were considered to have achieved complete clinical clearance if no visual evidence of the tumor remained.

A commercially available, validated [16], non-invasive fluorescence imaging system (Dyaderm, Biocam, Regensburg, Germany) [17] was employed to image each lesion prior to MAL application, immediately before irradiation and immediately after irradiation. This permitted PpIX accumulation and subsequent photobleaching during irradiation to be monitored.
The fluorescence imaging system simultaneously collected and processed in real-time a normal colored image (from white light) and a PpIX fluorescence image (from blue light; 370–440 nm) using a filtered Xenon flash light source, a charged couple device camera and custom-made software (Dyaderm Pro v2, Biocam, Regensburg, Germany). Natural green spectrum autofluorescence was also imaged and subtracted from the image produced to ensure that the sole changes recorded resulted from PpIX. A synthetic PpIX fluorescence standard (Biocam, Regensburg, Germany) was also imaged on each clinic day to ensure system continuity and reproducibility.
This process followed the standard protocol derived previously to enable reproducible images to be acquired and thus PpIX levels to be semi-quantified in a reliable manner with a piece of equipment originally designed for PDD [16]. This included a standardized warm up phase, consistent imaging distance/perpendicular angle, consistent light conditions (door shut/lights on), central orientation of the lesion and maximal camera activation of sixty seconds.

Bitmap image exports were analyzed in NIH ImageJ software (http://rsb.info.nih.gov/ij/) using the same point within the lesion to record the mean greyscale values at each time point. Following data integrity checks, where the data held in Microsoft Excel was cross referenced with the original data in its entirety by one researcher and additional spot checks undertaken at 10% intervals by a second researcher, the entire data set was imported into STATA 14.1 for analysis in this non-interventional, observational study.
This data set originally contained 270 entries for licensed lesions that had undergone fluorescence imaging during standard MAL-PDT. Any lesion that did not have complete three time point fluorescence data sets recorded for both MAL-PDT treatment cycles was removed. STATA’s drop duplicate command then selected at random, without bias, one data set from each participant where treatments/fluorescence imaging had been conducted on more than one lesion. This left 207 complete entries. Finally, any lesion where the clinical response at three months was not known was removed, producing 172 data sets for analysis.
Lesion location was classified as head, body, arms, legs and acral. A further peripheral category was created, where acral sites were merged with lesions on the arms and legs.
PpIX accumulation was calculated by subtracting pre-treatment fluorescence (before MAL application) from pre-irradiation fluorescence. PpIX photobleaching was calculated by subtracting post-irradiation fluorescence from pre-irradiation fluorescence. Comparisons between the three time points were initially made using paired t-tests and repeated measures ANOVA.
Linear regression analyses were then utilized to analyze the difference in PpIX accumulation/photobleaching for a range of predictors including lesion type, lesion location, pain relief, age and gender. Logistic regression analysis was used to explore the odds of complete clinical clearance for a range of predictors including lesion location, lesion type, age, sex, use of ACD and PpIX accumulation/photobleaching. To investigate the potential of PpIX accumulation/photobleaching to predict clinical outcome ROC curve analyses were performed using the STATA roccomp command. All models were adjusted for age and sex.

Non-invasive PpIX fluorescence monitoring is therefore concluded to be a useful technique for increasing understanding of the mechanism of action of dermatological MAL-PDT. Both PpIX accumulation and photobleaching are important indicators of treatment success and anything that adversely affects them has the potential to reduce efficacy, particularly as PpIX photobleaching during the first irradiation period has been found to be an excellent predictor of clinical outcome.

This research was funded by grants from Duchy Health Charity Ltd. and Killing Cancer, UK.

A. Curnow reports grant funding from Duchy Health Charity Ltd. and Killing Cancer, UK and has received speaker’s fees from Galderma UK. The funders had no role in the design of the study; in the collection, analyses, or interpretation of data; in the writing of the manuscript, and in the decision to publish the results. 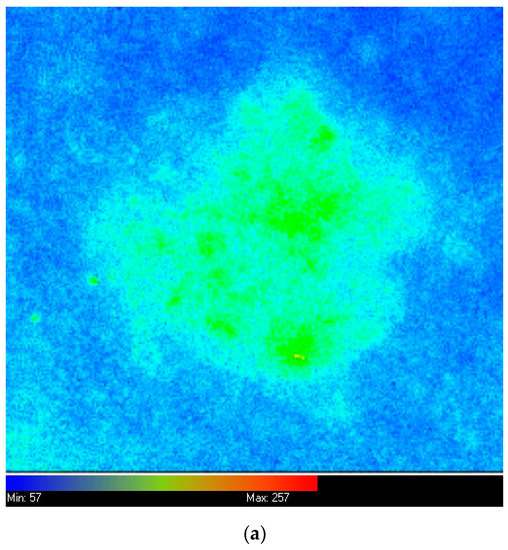 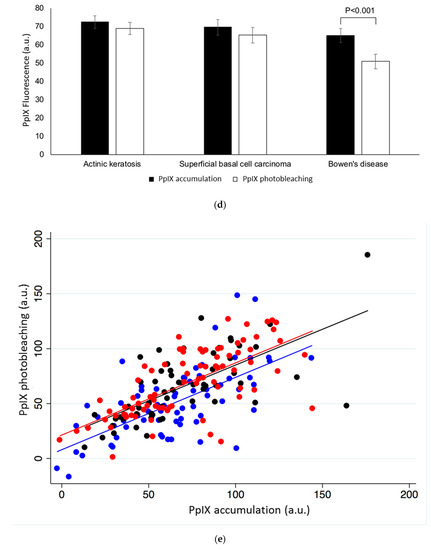 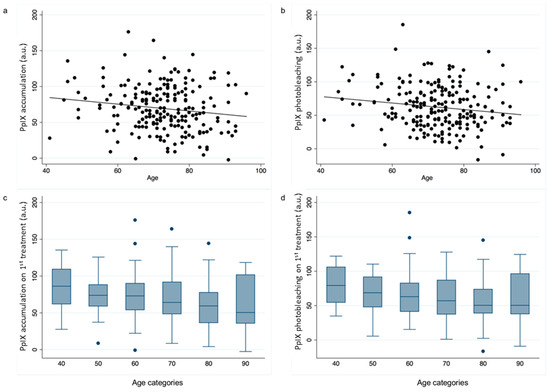 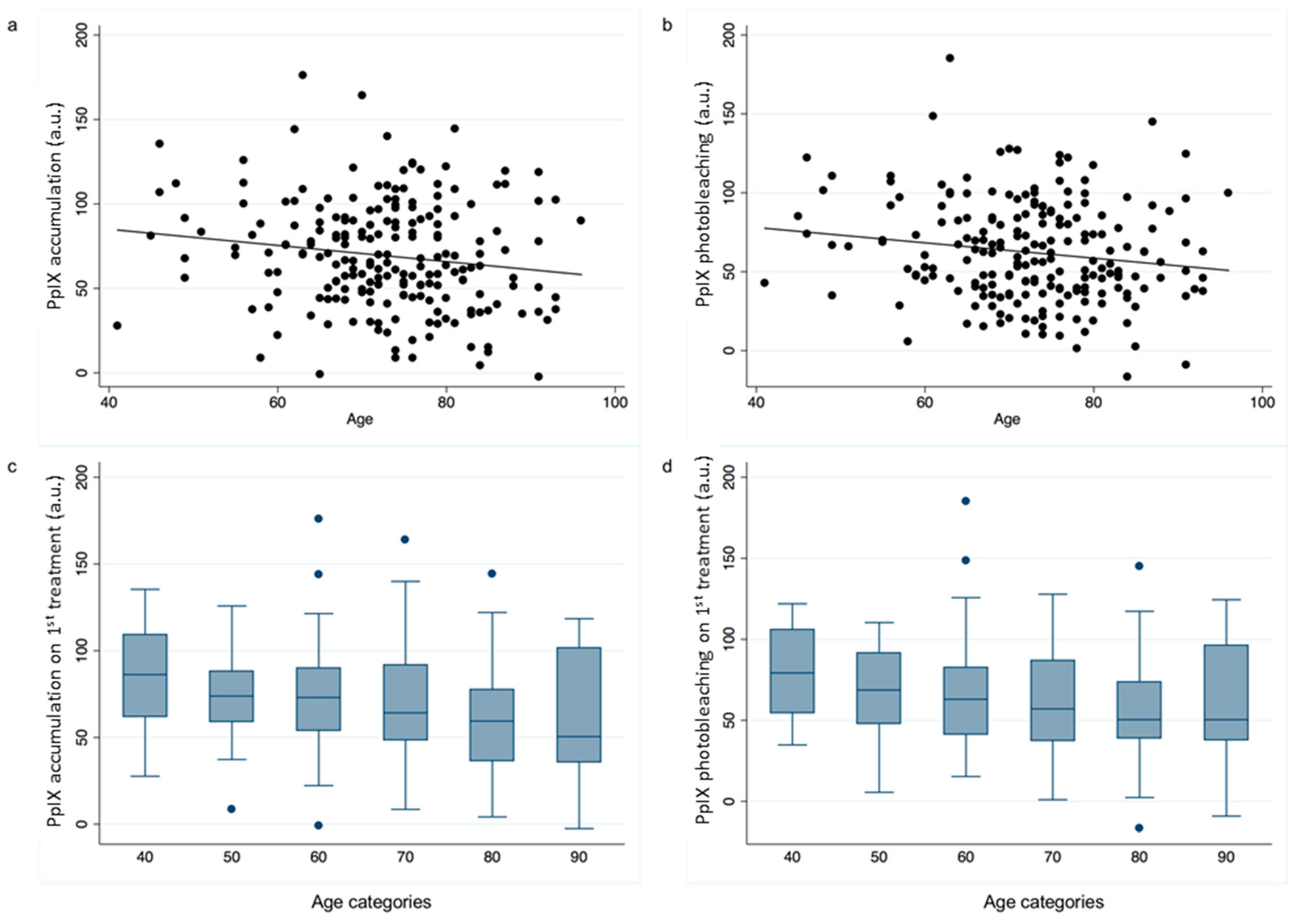 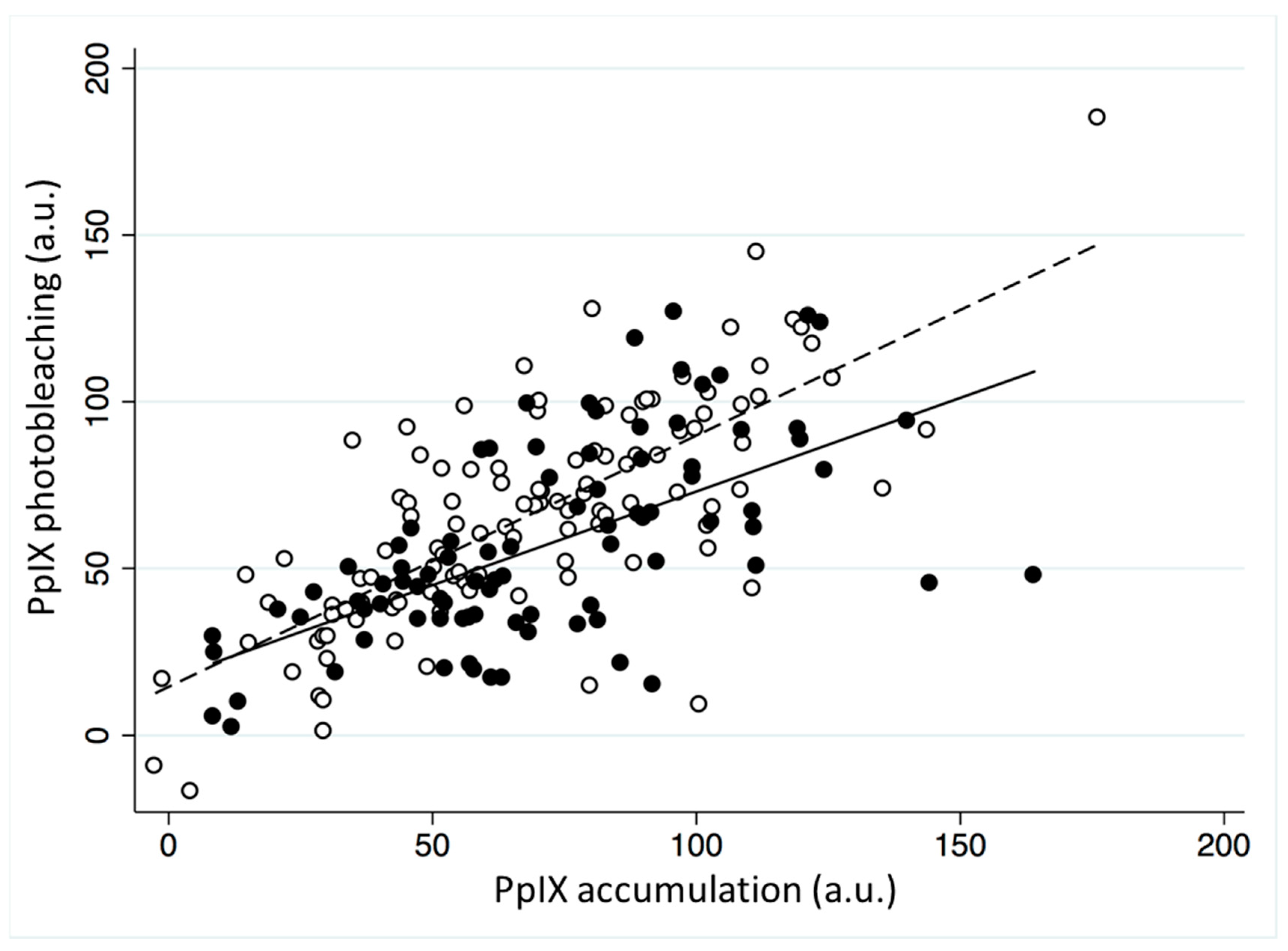