Interplay of Viral Infection, Host Cell Factors and Tumor Microenvironment in the Pathogenesis of Nasopharyngeal Carcinoma
Previous Article in Journal

Both EBV+ and MSI gastric cancers (GCs) have high lymphoid infiltration which is rare in MSS/EBV− cancers. PD-L1/PD-1 interaction leads to a down-regulated immune response and it is one of the most promising targets for gastric cancer immunotherapy. PD-L1/PD-1 and CD8 expression were immunohistochemically investigated in a series of 169 FFPE GCs, including 33 EBV+, 59 MSI and 77 MSS/EBV− cases. PD-L1 membrane immunoreactivity in more than 5% of tumor cells was present in 31/169 GCs and was associated with high levels of CD8 intraepithelial lymphocytes (TILs; p < 0.001). PD-L1+ cases were mainly poorly differentiated (71%), intestinal type (85%) and high lymphoid response (HLR; 90%) tumors. PD-L1 expression was only present in EBV⁺ (46%), MSI (24%) and rare MSS/EBV− (3%) GCs with high CD8+ TILs (p < 0.001). Despite being associated with a better prognosis both in the whole series (p < 0.05) and in the MSI subset, PD-L1 is not an independent prognostic factor. PD-L1 gene amplification was detected in 3/17 cases, including 2/7 EBV+ and 1/8 MSI GC. PD-1⁺ TILs were significantly higher in EBV⁺ than MSI and MSS/EBV− cases. PD-L1/PD-1 pathway is selectively activated in HLR GCs and could be considered an emerging therapeutic target, particularly for EBV and MSI GCs. View Full-Text
Keywords: gastric cancer; PD-L1; EBV; MSI; tumor infiltrating lymphocytes gastric cancer; PD-L1; EBV; MSI; tumor infiltrating lymphocytes
►▼ Show Figures 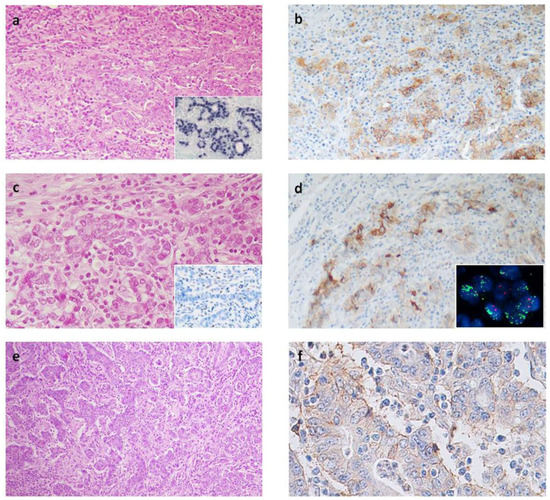