Epigenetic Modifications as Biomarkers of Tumor Development, Therapy Response, and Recurrence across the Cancer Care Continuum
Previous Article in Journal

The Epithelial-to-Mesenchymal Transition in Cancer

Epigenetic events and genetic alterations under the control of the tumor microenvironment potentially mediate tumor induced angiogenesis involved in soft tissue sarcoma (STS) metastasis. Addition of antiangiogenic agent, such as bevacizumab, to standard chemotherapy in treatment of sarcoma has been studied in clinical trials, but most of the findings have not supported its use. We hypothesized the existence of an epigenetically mediated “angiogenic switch”, and the tumor microenvironment, prevents bevacizumab from truly blocking angiogenesis. The addition of valproic acid (VPA), a weak histone deacetylase inhibitor, and bevacizumab, a monoclonal antibody against vascular endothelial growth factor, together with the cytotoxic effects of gemcitabine and docetaxel, may enhance responses and alter chemoresistance. This was designed as a phase I/II trial with primary endpoints including safety of the treatment combination and tumor response. Unresectable or metastatic sarcoma patients >18 years of age, irrespective of number of prior treatments, received VPA 40 mg/kg orally for 5 days prior to day 1, bevacizumab at 15 mg/kg IV on day 1, gemcitabine 900 mg/m2 (day 1, day 8), and docetaxel 75 mg/m2 (day 8). Cycles were of 28 day duration. Bevacizumab and VPA were continued as maintenance after 6 cycles, until disease progression. A standard 3 + 3 phase I dose de-escalation design was utilized to evaluate safety. Gain of function p53 gene mutation testing was performed on available archival tissue specimens. A total of 46 patients (30 female, 16 male) with median age of 60 (range 24–81) years were enrolled; 34 (73.9%) patients received prior chemotherapy, 14 (30%) of which received prior gemcitabine and docetaxel. Patients received a median of 5.5 cycles (range 0–24 of treatment (min 0, one patient died prior to completing the first cycle; max: 24, one patient received 6 cycles and 18 maintenance cycles before progressing). Seventeen patients underwent dose reduction, of which VPA was reduced in 6 patients. Forty-one patients were evaluable for response. There was a confirmed complete response in 1 (epithelioid sarcoma), and a partial response (PR) in 6 (1 carcinosarcoma, 2 extrauterine leiomyosarcoma (LMS), 2 undifferentiated pleomorphic sarcoma, and 1 uterine LMS) patients. Stable disease (SD) was seen in 21 patients for at least 2 months. One subject with prior gemcitabine and docetaxel had PR, and 7 had SD. Median progression-free survival (PFS) was 5.7 months (95% CI: 2.1–8.0), and overall survival (OS) was 12.9 months (95% CI: 8.3–14.5). Three patients died due to tumor progression while on the study. The combination of VPA, bevacizumab, gemcitabine, and docetaxel appears to be moderately safe and well tolerated. Given that there are very limited options for patients with relapsed refractory STS, this drug combination may be an important therapy to consider. This combination treatment deserves further investigation in epithelioid and carcinosarcoma subtypes. View Full-Text
Keywords: sarcoma; valproic acid; rheostat; angiogenesis; epigenetics; bevacizumab sarcoma; valproic acid; rheostat; angiogenesis; epigenetics; bevacizumab
►▼ Show Figures 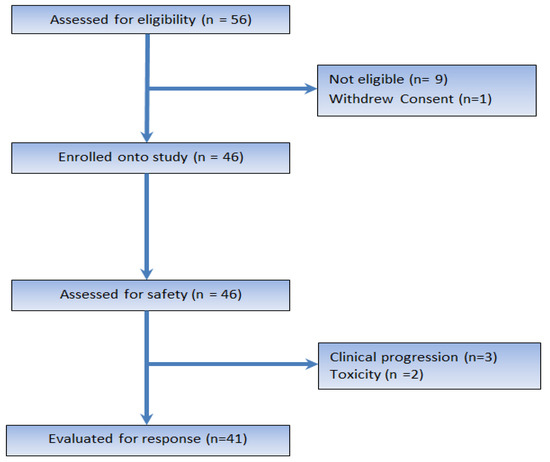