We report on microfabrication and assembly process development on transparent, biocompatible polymers for patterning electrodes and growing electrically active cells for in vitro cell-based biosensor applications. Such biosensors are typically fabricated on silicon or glass wafers with traditional microelectronic processes that can be cost-prohibitive without imparting necessary biological traits on the devices, such as transparency and compatibility for the measurement of electrical activity of electrogenic cells and other biological functions. We have developed and optimized several methods that utilize traditional micromachining and non-traditional approaches such as printed circuit board (PCB) processing for fabrication of electrodes and growing cells on the transparent polymers polyethylene naphthalate (PEN) and polyethylene terephthalate (PET). PEN-based biosensors are fabricated utilizing lithography, metal lift-off, electroplating, wire bonding, inkjet printing, conformal polymer deposition and laser micromachining, while PET-based biosensors are fabricated utilizing post-processing technologies on modified PCBs. The PEN-based biosensors demonstrate 85–100% yield of microelectrodes, and 1-kHz impedance of 59.6 kOhms in a manner comparable to other traditional approaches, with excellent biofunctionality established with an ATP assay. Additional process characterization of the microelectrodes depicts expected metal integrity and trace widths and thicknesses. PET-based biosensors are optimized for a membrane bow of 6.9 to 15.75 µm and 92% electrode yield on a large area. Additional qualitative optical assay for biomaterial recognition with transmitted light microscopy and growth of rat cortical cells for 7 days in vitro (DIV) targeted at biological functionalities such as electrophysiology measurements are demonstrated in this paper. View Full-Text
Keywords: polymer micro/nanofabrication; biosensor arrays; microelectrode arrays; assembly/packaging processes; biofunctional devices polymer micro/nanofabrication; biosensor arrays; microelectrode arrays; assembly/packaging processes; biofunctional devices
►▼ Show Figures 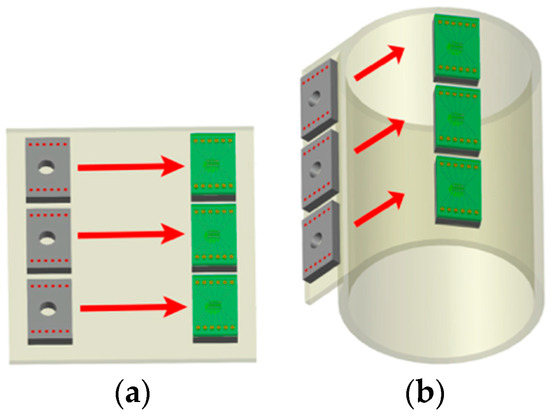