In this section, the fabrication process, measurement setups, and measurement results are presented. Devices are produced by electron beam (EB) lithography, photolithography, deep reactive ion etching (RIE), and anodic bonding methods. To save time during the exposing process of EB lithography, only nano capacitive gaps are formed. An extra conventional photolithography is subsequently performed to create the resonator structures. The formed silicon resonator structures on a silicon on insulator (SOI) wafer are transferred to a glass substrate by anodic bonding in order to reduce the parasitic capacitances of the handling silicon layer. Detailed information on the procedure follows.

The starting substrate is an SOI wafer with a 7-μm-thick device layer with a low resistivity of 0.02 Ωcm, a 1-μm-thick oxide layer, and a 300-μm-thick silicon handling layer (Figure 3a). After conventional cleaning including RCA1, RCA2, and piranha, an approximately 500-nm-thick SiO2 layer is formed on the entire surface of the SOI wafer via wet thermal oxidation (Figure 3b). Then, a 400-nm-thick EB resist (ZEP 502A) is patterned on the above SiO2 layer (on the device layer side). The reactive ion etching (RIE) method is employed to etch SiO2 with the EB resist as a mask, using a gas mixture of CHF3 and Ar with a power of 120 W and a chamber pressure of 5 Pa. Narrow gaps with smooth and vertical etched shapes were achieved, as shown in Figure 4a. After removing the EB resist, the nano trenches on the top silicon layer are then formed by the deep RIE with Bosch process using SF6 (etching cycles of 2.5 s) and C4F8 (passivation cycles of 2.5 s) gases. Figure 4b shows the nano trenches formed using the above process. The resonant body and capacitive gaps are 500 nm and 300 nm, respectively. Following this, the resonator structures are created by employing photolithography following the deep RIE of silicon (Figure 3c).
To reduce the parasitic capacitances from the handling silicon substrate, the 300-μm-thick Tempax glass (Shibuya Optical Co., Ltd, Wako-Shi, Saitama, Japan) substrate is employed for the transferring process. The resonator structures on the SOI wafer are aligned and bonded with the Tempax glass substrate by an anodic bonding technique (Figure 3d). The bonding process is performed at 400 °C with 800 V power sources for 15 min. Although the thermal expansion coefficients of Si and glass are similar, they possibly cause stress on silicon device layer after bonding. To avoid this problem, the cooling process is important. It takes few hours to complete the cooling process. The heated stage is decreased slowly. The backside silicon handling layer is removed by the plasma etching of SF6 gas. After the buried SiO2 layer is etched out by buffered hydrofluoric acid (BHF) solution and devices are dried by a supercritical CO2 process to avoid sticking issues, the electrode pads using Cr-Au are formed by a sputtering process via a shadow mask. Finally, the Au wire bonding process is conducted, as shown in Figure 3e.
Figure 4c–f show the successfully fabricated devices with differently expected mode vibration shapes, including the first, second, third, and fourth mode, respectively.

The frequency responses of the fabricated devices are evaluated by the electrical setup shown in Figure 5. The measurement setup contains a network analyzer (E5071B ENA Series, Agilent Technologies, Santa Clara, CA, USA) with a frequency range from 300 kHz to 8.5 GHz, DC voltage source VDC, electrical components including capacitors and resistors, and coaxial cables. The resonators are set in a vacuum chamber at a pressure chamber of 0.01 Pa.
To detect the motion of the first mode vibration structure, the setup shown in Figure 5a is employed. The output and input ports of the network analyzer are connected to the driving and sensing electrodes, respectively, through the resistors and capacitors, while the resonant body electrode is attached to the ground. The purpose of usage of the resistors and capacitors is to decouple the radio frequency (RF) signal and also to avoid damaging the network analyzer. In turn, to the high-order mode vibration, all driving electrodes on both sides of the resonant body electrode are connected to the output port of the network analyzer while the resonant body is connected to the input port of the network analyzer (Figure 5b).

Takahito Ono and Yunheub Song designed and conducted the project. Nguyen Van Toan performed the experiments together with Tsuyoshi Shimazaki and Naoki Inomata. The data summary and writing of the article was mainly done by Nguyen Van Toan. Takahito Ono and Yunheub Song gave suggestions and helpful discussion on the experiments and manuscript writing. 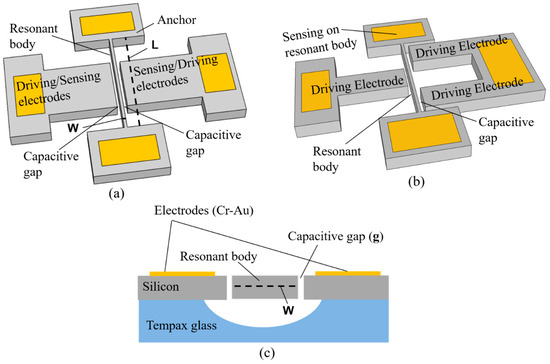 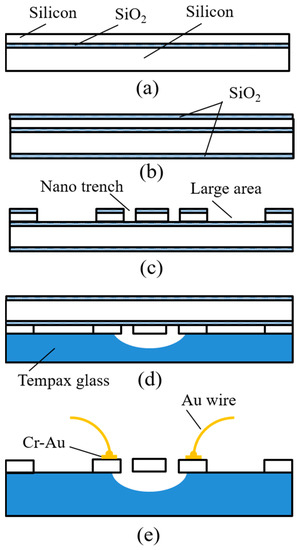 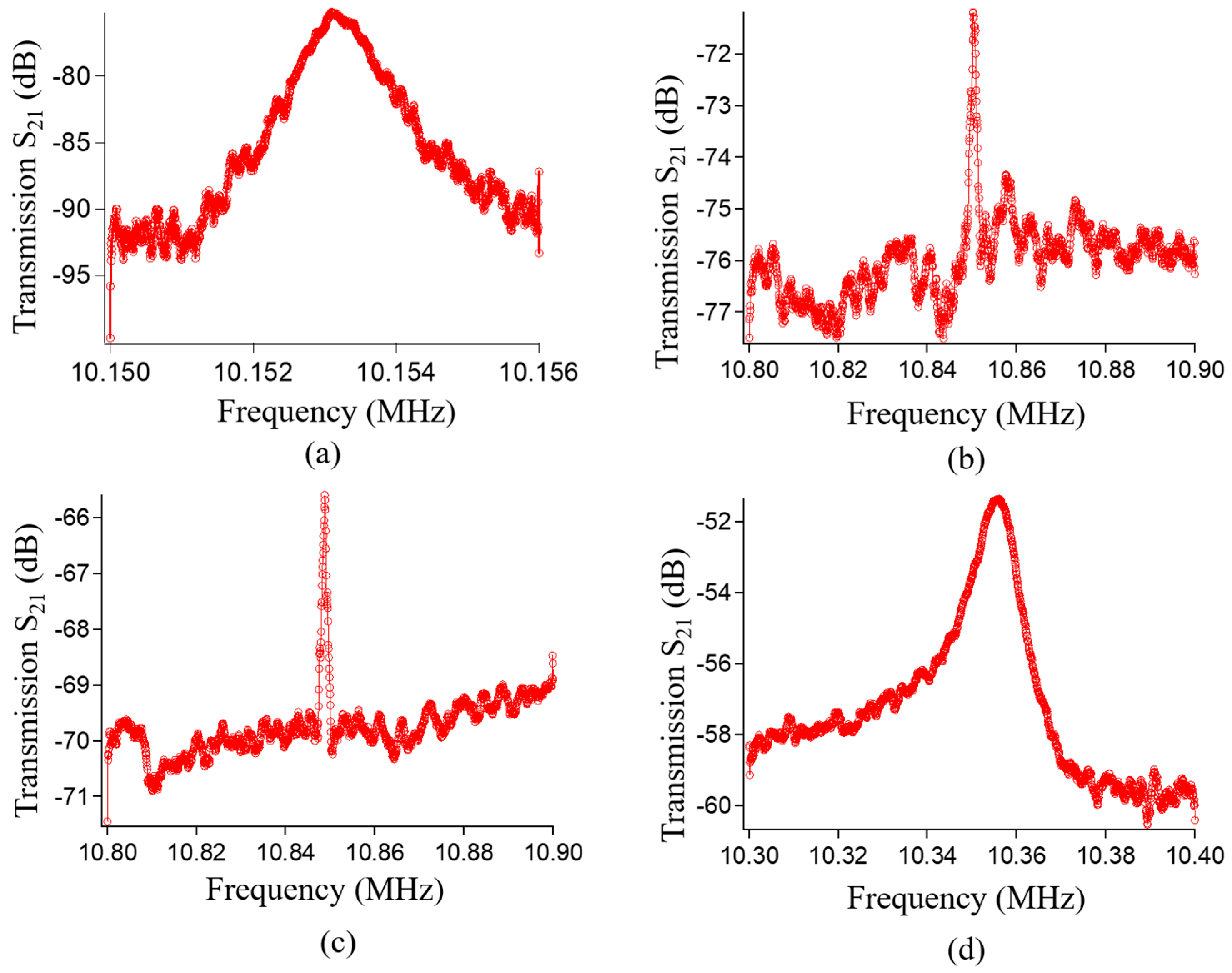