Hydrocortisone (HC) nanocrystals intended for parenteral administration of HC were produced by anti-solvent crystallisation within coaxial assemblies of pulled borosilicate glass capillaries using either co-current flow of aqueous and organic phases or counter-current flow focusing. The organic phase was composed of 7 mg/mL of HC in a 60:40 (v/v) mixture of ethanol and water and the anti-solvent was milli-Q water. The microfluidic mixers were fabricated with an orifice diameter of the inner capillary ranging from 50 µm to 400 µm and operated at the aqueous to organic phase flow rate ratio ranging from 5 to 25. The size of the nanocrystals decreased with increasing aqueous to organic flow rate ratio. The counter-current flow microfluidic mixers provided smaller nanocrystals than the co-current flow devices under the same conditions and for the same geometry, due to smaller diameter of the organic phase stream in the mixing zone. The Z-average particle size of the drug nanocrystals increased from 210–280 nm to 320–400 nm after coating the nanocrystals with 0.2 wt % aqueous solution of hydroxypropyl methylcellulose (HPMC) in a stirred vial. The differential scanning calorimetry (DSC) and X-ray powder diffraction (XRPD) analyses carried out on the dried nanocrystals stabilized with HPMC, polyvinyl pyrrolidone (PVP), and sodium lauryl sulfate (SLS) were investigated and reported. The degree of crystallinity for the processed sample was lowest for the sample stabilised with HPMC and the highest for the raw HC powder. View Full-Text
Keywords: hydrocortisone; drug nanocrystals; nanoprecipitation; microfluidic mixers; solvent-antisolvent crystallization; enteric coating; X-ray diffraction; differential scanning calorimetry hydrocortisone; drug nanocrystals; nanoprecipitation; microfluidic mixers; solvent-antisolvent crystallization; enteric coating; X-ray diffraction; differential scanning calorimetry
►▼ Show Figures 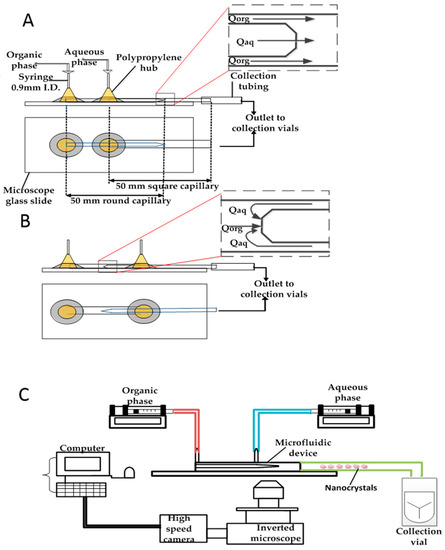