While nanoscale electrokinetic studies based on ion concentration polarization has been actively researched recently, random vortices naturally occur, leading to significantly destabilize in laboratory experiments or practical applications. These random vortices agitate the fluid inside microchannels and let the sample molecules seriously leak out preventing them from being controlled. Therefore, several trials have been reported to regulate those uninvited fluctuations by fluid flow tangential to a nanoporous membrane. Indeed, the influence of normal flow should be studied since the mass transport happens in the normal direction to the membrane. Thus, in this work, the nonlinear influence of normal flow to the instability near ion-selective surface was investigated by fully-coupled direct numerical simulation using COMSOL Multiphysics. The investigation on the effect of normal flow revealed that a space charge layer plays a significant role in the onset and growth of instability. The normal flow from the reservoir into the ion-selective surface pushed the space charge layer and decreased the size of vortices. However, there existed a maximum point for the growth of instability. The squeeze of the space charge layer increased the gradient of ion concentration in the layer, which resulted in escalating the velocity of vortices. On the other hand, the normal flow from the ion-selective surface into the reservoir suppressed the instability by spreading ions in the expanding space charge layer, leading to the reduction of ion concentration delayed the onset of instability. These two different mechanisms rendered asymmetric transition of stability as a function of the Peclet number and applied voltage. Therefore, this investigation would help understand the growth of instability and control the inevitable random vortices for the inhibition of fluid-agitation and leakage. View Full-Text
Keywords: ion concentration polarization; vortex; instability; normal flow ion concentration polarization; vortex; instability; normal flow
►▼ Show Figures 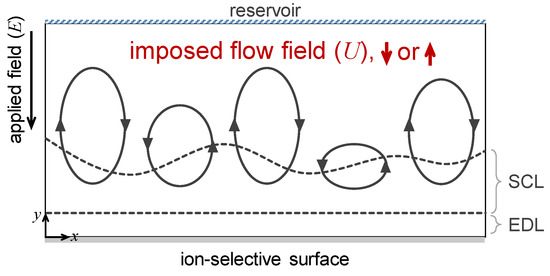