Electrophysiological techniques to characterize the functionality of islets of Langerhans have been limited to short-term, one-time recordings such as a patch clamp recording. We describe the use of microelectrode arrays (MEAs) to better understand the electrophysiology of dissociated islet cells in response to glucose in a real-time, non-invasive method over prolonged culture periods. Human islets were dissociated into singular cells and seeded onto MEA, which were cultured for up to 7 days. Immunofluorescent imaging revealed that several cellular subtypes of islets; β, δ, and γ cells were present after dissociation. At days 1, 3, 5, and 7 of culture, MEA recordings captured higher electrical activities of islet cells under 16.7 mM glucose (high glucose) than 1.1 mM glucose (low glucose) conditions. The fraction of the plateau phase (FOPP), which is the fraction of time with spiking activity recorded using the MEA, consistently showed distinguishably greater percentages of spiking activity with high glucose compared to the low glucose for all culture days. In parallel, glucose stimulated insulin secretion was measured revealing a diminished insulin response after day 3 of culture. Additionally, MEA spiking profiles were similar to the time course of insulin response when glucose concentration is switched from 1.1 to 16.7 mM. Our analyses suggest that extracellular recordings of dissociated islet cells using MEA is an effective approach to rapidly assess islet functionality, and could supplement standard assays such as glucose stimulate insulin response. View Full-Text
Keywords: islets of Langerhans; insulin secretion; microelectrode array (MEA); glucose stimulated insulin response; electrochemical transduction islets of Langerhans; insulin secretion; microelectrode array (MEA); glucose stimulated insulin response; electrochemical transduction
►▼ Show Figures 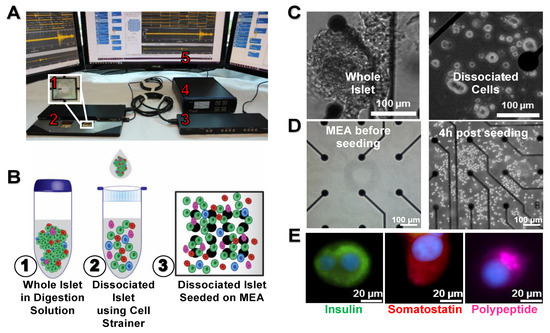