Wind is a great sustainable energy source for harvesting due to its abundant characteristic. Typically, large space, loud noise, and heavy equipment are essential for a general wind power plant and it is solely operated by big-scale wind. However, wind energy can be efficiently harvested by utilizing the triboelectric nanogenerator due to its abundance, ubiquity, and environmentally friendliness. Furthermore, a few previously reported wind-driven triboelectric nanogenerators, which have the bulk fluttering layer by wind, still show difficulty in generating electricity under the conditions of weak wind because of the static friction arisen from the inherent structure. In this case, the output performance is deteriorated as well as the generator cannot operate completely. In this work, a wind-driven triboelectric nanogenerator (wind-TENG) based on the fluttering of the PTFE strips is proposed to solve the aforementioned problems. At the minimum operating wind pressure of 0.05 MPa, this wind-driven TENG delivers the open-circuit voltage of 3.5 V, short-circuit current of 300 nA, and the associated output power density of 0.64 mW/m2 at the external load resistance of 5 MΩ. Such conditions can be used to light up seven LEDs. Moreover, this wind-TENG has been utilized as a direction sensor which can sense the direction at which the wind is applied. This work thus provides the potential application of the wind-TENG as both self-driven electronics and a self-powered sensor system for detecting the direction under environmental wind.
Keywords: wind; triboelectric nanogenerator; directionality; polytetrafluoroethylene; sensor; strip wind; triboelectric nanogenerator; directionality; polytetrafluoroethylene; sensor; strip

The major concern pertaining to energy crises is that the worldwide demands on the natural resources which are used to power industrial society are increasingly growing [1,2]. As a consequence of the fuel shortage, energy harvesting technology, which is an efficient and sustainable technique to transform various environmental energies to useful electrical energy, has been developing [3]. Among the various renewable energy systems, wind energy has become one of the most efficient energy sources due to its abundance, ubiquity, and environmentally friendliness [4,5,6]. The conventional wind turbines, generally based on the mechanism of electromagnetic induction, convert kinetic energy of the wind into mechanical energy and then into electricity [7,8]. However, these kinds of energy harvesters have some limitations, such as heaviness, large volume, complicated structure, and low efficiency at low frequency, which cause these devices to be held back in small-scale applications under weak wind conditions [9]. For this reason, even though weak wind exists around us, it is easily discarded before harvest. For that reason, seeking a new type of energy harvester that can sensitively collect the small-scale wind is becoming increasingly necessary.
Recently, the triboelectric nanogenerator (TENG), first invented in 2012, has been utilized to harvest mechanical energy from our living environment into electricity based on triboelectrification and electrostatic induction [10,11,12,13,14,15,16,17,18,19], possessing the properties such as simple and low-cost fabrication process, high output performance, high efficiency at low frequency, and eco-friendly characteristic [20,21,22,23]. At this rate, harvesting wind energy to develop TENG technology is necessary because energy harvesting from wind can not only reduce the fabrication cost but also extend the potential applications of TENGs.
Transforming wind energy into electricity is regarded as one of the most popular research processes in TENGs. The first reported wind-driven TENG consists of two Al plates and fluorinated ethylene propylene (FEP) film which is fixed at one end and flutter to harness wind energy from the environment [24]. There have also been many reported TENGs which are based on the wind-driven effect [25,26,27,28,29,30,31,32]. Nevertheless, almost all of the reported devices are based on a bulk fluttering material structure. The dielectric material cannot properly flutter under the weak wind condition which reduces the efficiency and total virtue of the device at ambient situations.
In this work, we propose a wind-driven triboelectric nanogenerator based on the fluttering of the polytetrafluoroethylene (PTFE) strips dielectric layer. The wind-TENG consists of two Al electrode plates and the PTFE film as the dielectric layer with one end fixed and the other end left free-standing. To flap the fluttering layer of the device, wind is injected into the device through the conventional air gun. To enhance the fluttering rate and operational output under the weak wind, PTFE film is cut and snipped into strips at the free-standing end. The optimum length and width of the PTFE strips have been investigated to enhance the better output performance of the wind-TENG under the relevant wind pressure. The minimum operating wind pressure at which the device can harness the functional output has also been examined. The open-circuit voltage and short circuit current at the minimum operating wind pressure of 0.05 MPa are 3.5 V and 300 nA. The maximum output power density is 0.64 mW/m2 at the match resistance of 5 MΩ which can be used to illuminate seven commercial light-emitting diodes (LEDs). The direction can be sensed by injecting the wind into the integrated device, showing that the wind-TENG has potential in self-driven devices and self-powered sensor systems.

The fabricated wind-TENG is based on the wind-driven fluttering PTFE film, two aluminum electrode plates and neodymium magnets as the spacer. The size of the Al plate is 60 mm × 30 mm with a thickness of 0.4 mm and that of neodymium magnet is 5 × 5 mm with a thickness of 0.5 mm. The water-assisted oxidation (WAO) process was conducted to grow the nanograss-like structure on the surface of the Al electrodes. Deionized water was put in a beaker and two Al electrodes were also added and then the beaker was heated to the temperature of 80 °C. The temperature was maintained at the same point for 1 h. The oxidized Al electrodes were then removed from the boiling water and completely dried them with nitrogen gas. The magnets were attached to the two corners of the aluminum electrode by using the fast-drying glue, at these corners, the PTFE film is fixed between the spacer magnets. The nitrogen gas was applied to the device at the wind pressure of 0.05 MPa. To flutter the PTFE film effectively under the weak wind, the free-standing end of the PTFE film was cut into strips and the length and width of the strips were adjusted to attain their optimum values.

For the measurement of wind-TENG, wind was injected using a commercial air gun and the speed of the wind was measured via an anemometer. The open-circuit voltage and short-circuit current of the wind-TENG device were measured by using Keithley 6514 System electrometer (Cleveland, OH, USA).

In summary, this work presented a wind-driven triboelectric nanogenerator based on the fluttering of PTFE strips to harvest the mechanical energy from notably weak wind speed comparable to the intensity of a gentle wind. By observing the optimum length and width of the PTFE strips, the wind-TENG can operate at the minimum wind pressure of 0.05 MPa with the wind speed of 1.5 m/s. The open-circuit voltage and short-circuit current of the wind-TENG at 1.5 m/s were shown with the values of 3.5 V and 300 nA, respectively and the maximum output power density of 0.64 mW/m2 was represented under the load resistance of 5 MΩ. The fabricated wind-TENG can be used to charge various capacitors and light up seven commercial LEDs. The output performances at the high wind speed which value was over the average natural wind speed, were also measured to prove the device can generate higher output and be comparable with other wind-driven devices. Moreover, by integrating the wind-TENG in a stacking structure through a parallel connection, the directionality of omnidirectional wind was favorably detected. On account of the above merits, the wind-TENG can be applied in our environment to scavenge even a weak wind energy which is converted into electricity for powering the electronics or charging energy storage devices. This work illustrated the high potential in the practical applications of TENG for extremely weak wind energy harvesting.

The following are available online at https://www.mdpi.com/2072-666X/11/4/414/s1, Figure S1: (A) Schematic diagram of the wind-TENG with SEM image showing the surface of bare Al electrode without WAO process. (B) Open-Circuit voltage and (C) Short-Circuit current of wind-TENG comprising bare Al and PTFE at the minimum operating wind pressure of 0.05 MPa, Figure S2: Working mechanism of the wind-TENG with the bulk PTFE under weak wind, Figure S3: Optical images of PTFE films displaying, Figure S4: (A) Load resistance dependency of the output voltage and current at wind pressure of 0.2 MPa. (B) Load resistance dependency of the output power at wind pressure of 0.2 MPa, Figure S5: Open-circuit voltages when the wind is injected into (A) Side 1 (B) Side 2 (C) Side 3 and (D) Side 4 of the integrated TENG. 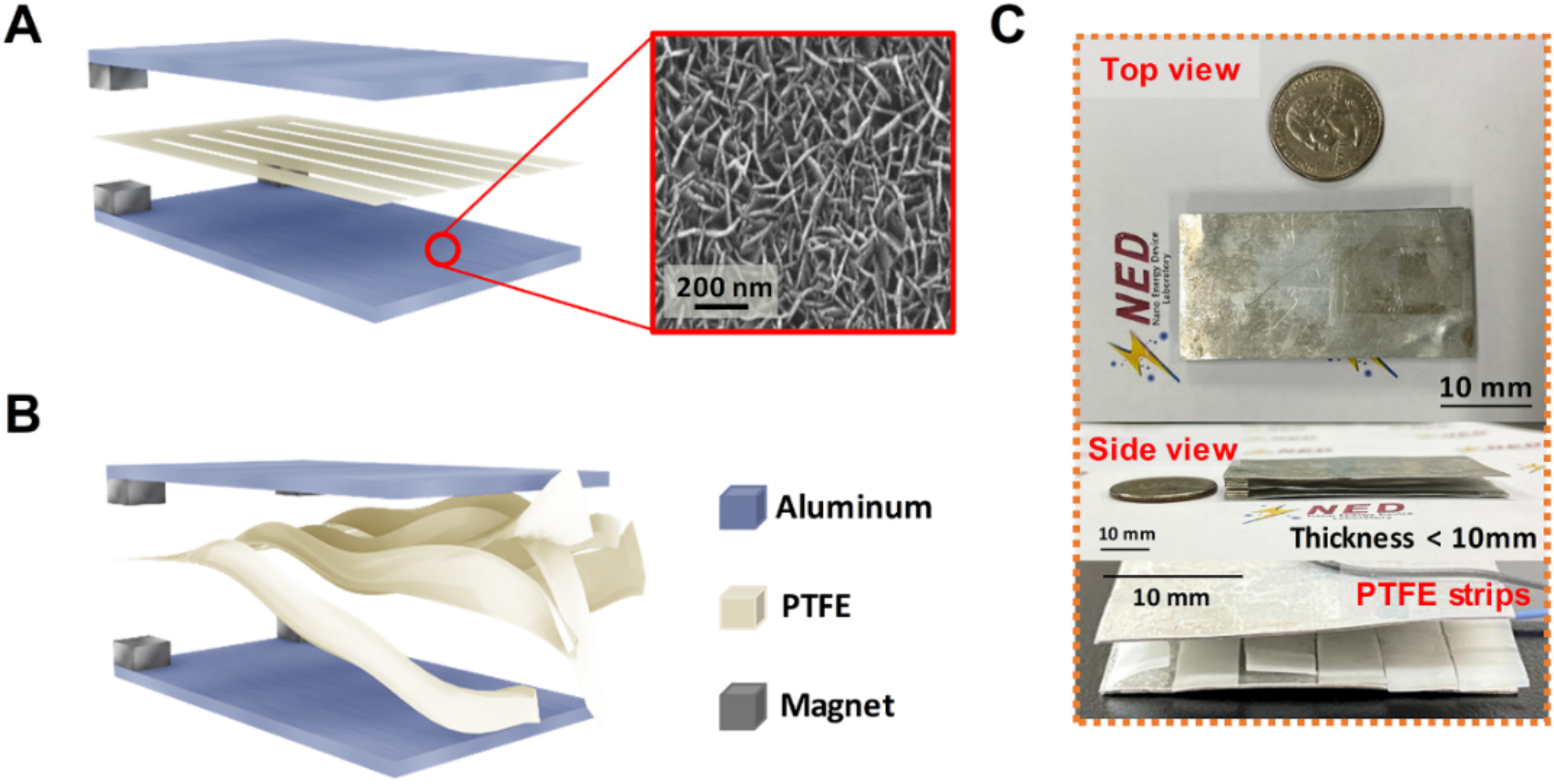 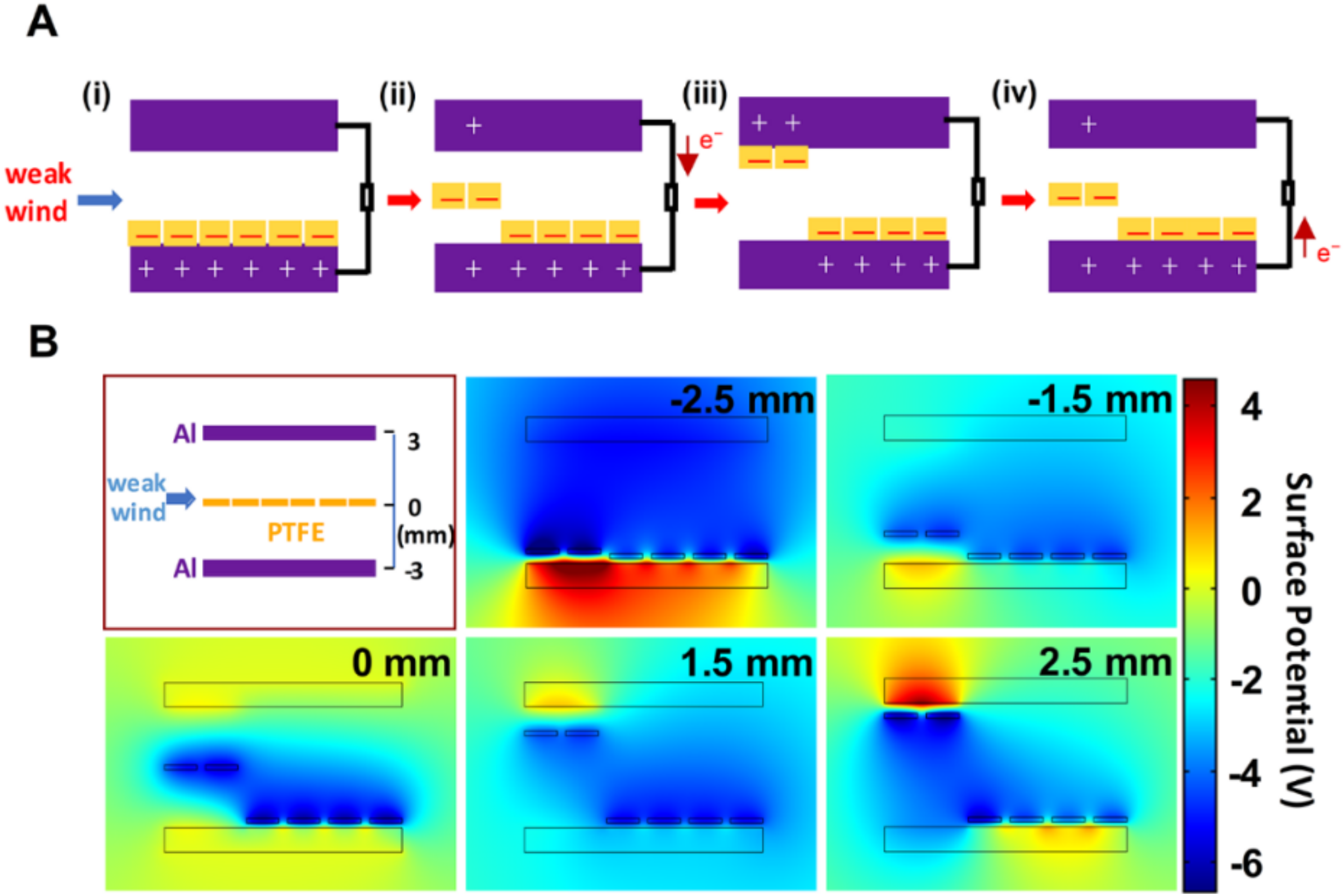 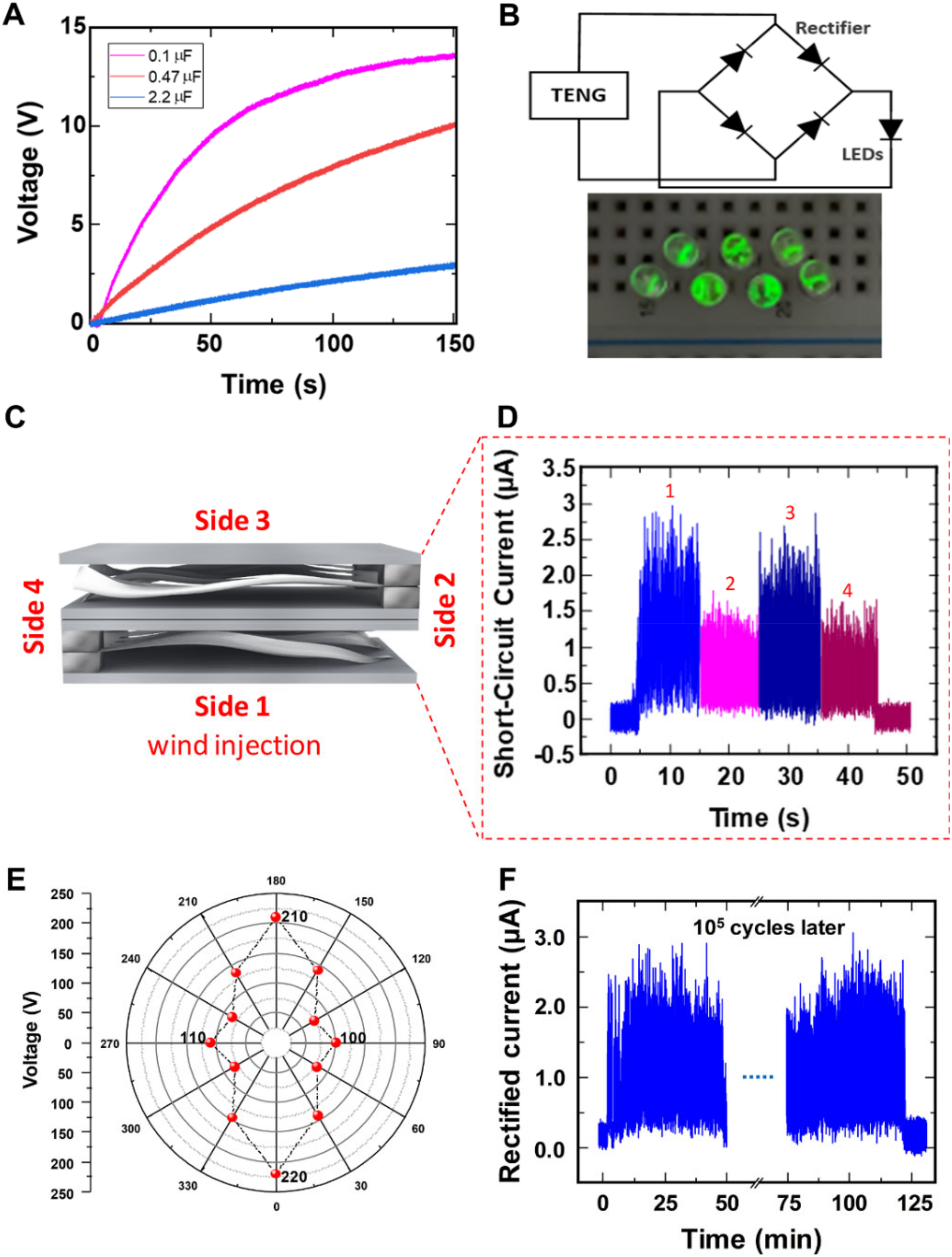