MEMS Mirrors for LiDAR: A Review
Previous Article in Journal

Micro electromechanical systems (MEMS) micromirror is a candidate device to control the direction of a reflected light [1]. These devices can be actuated using several actuation mechanisms such as electrostatic [2,3], electromagnetic [4,5,6], and piezoelectric actuation [7,8,9,10]. Amongst the available actuation mechanisms, the electrostatic method is largely used due to several advantages including low power consumption, fast response time, and ease of fabrication [11,12]. Electrostatically actuated MEMS micromirrors are traditionally used in applications such as Light Detection and Ranging (LIDAR), optical coherence tomography, and micro-scanners [13,14]. However, a main disadvantages of the electrostatically actuated MEMS micromirror is their pull-in instability that limits the stroke the micromirror to 1/3 of the distance between the top and bottom actuating plates [15,16,17]. Stroke of these micromirrors is defined as the distance that the micromirror surface can travel in the space between the top and bottom actuating plates [12,16]. In a MEMS micromirror, a higher level of stroke can increase the device performance by improving the scanning angle [6,11]. Several methods are proposed to increase the stroke level of electrostatically actuated MEMS micromirror [18] including the introduction of comb-drive actuator structure that can lead to an improved out-of-plane stroke level of 1.2 µm for an input DC bias voltage of 60 V [2]. However, the comb-drive structure may add to the device fabrication complexity. In an attempt to increase the stroke of these micromirrors, their air cavity can be increased using custom fabrication processes [19,20], which may further increase the design complexity and cost of the device fabrication. In traditional parallel plate micromirrors, the electrostatically actuated devices developed using PolyMUMPs [21] fabrication technique can yield an out-of-plane stroke level of 1.65 µm at 100 V input DC bias voltage [22]. However, in this fabrication process the maximum air cavity that can be achieved is limited to 2 µm [21], which therefore, limits the downward deflection of the micromirror.
In this work, an electrostatically actuated MEMS micromirror that benefits from repulsive electrostatic force is designed and simulated using Finite Element Analysis (FEA) method through COMSOL Multiphysics software. This proposed device employs a three-bottom electrode configuration [22,23] that generates an upward electrostatic force. This generated force is repulsive in nature, consequently, pushing the micromirror surface upward rather than conventional downward movement, and as a result reduces the pull-in instability effect of such systems. The proposed micromirror employs PolyMUMPs fabrication process where in an unconventional approach, the two oxide layers can be combined and as a result, an increased device air cavity of 2.75 µm can be achieved. This increased air cavity allows more space for the micromirror surface to travel, consequently increasing the stroke level. FEA simulations indicated that in this work, a high stroke level of 5 µm at 150 V DC is achieved for the designed device.

The influencing physical properties of the designed micromirror are identified and their effects on the device stroke level are investigated and analyzed. COMSOL Multiphysics simulation software is utilized to tailor the device properties in order to achieve an enhanced stoke level. The simulations consider the limitations imposed by the employed PolyMUMPs fabrication technique [21] including layer thicknesses as well as minimum separation distance. These fabrication limitations are considered in the micromirror design.
In the proposed three bottom electrode configuration, it is shown that the width of the arm inversely affects the deflection amplitude as the effect of the fringing field that creates the upward deflection is reduced. COMSOL simulation results indicate a drop in an individual arm’s displacements when the width of the arm is increased from 2 µm, which is the minimum line width in PolyMUMPs process, to 10 µm as presented in Figure 3 (solid line, triangle). However, when the L-shaped arm is connected to a 400 µm by 400 µm micromirror, it is unable to lift the micromirror if the width of the arm is narrower than 8 µm as illustrated in Figure 3 (dashed line, circle). Therefore, in this proposed device, an L-shaped arm with the width of 8 µm is designed.
In addition to the width of the L-shaped arm, the separation distance between the bottom electrodes influences the deflection level of the arms and in return, the stroke level of the micromirror due to its effect on the device fringing field. COMSOL simulations are conducted when the separation distance between the bottom electrodes is increased from 1 µm to 10 µm, with a 1µm step size. The separation distance is not increased beyond 10 µm to minimize the overall area of the device. Figure 4 illustrates the simulation results and indicates that the stroke increases with an increase in the separation distance. Furthermore, the results show that when the separation distance is less than or equal to 2 µm, the upper arm moves downward that is undesired. Figure 4 shows that when the separation distance is increased beyond 8 µm, the increase in the deflection is insignificant. Therefore, for the proposed design the optimum separation distance between the fixed bottom electrode is selected equal to 8 µm. Table 1 presents the physical properties of the proposed micromirror.
In this work, the dimension of the reflective micromirror surface is 400 µm by 400 µm. The micromirror is connected to four L-shaped arms. The micromirror and the L-shaped arms are fabricated in the top doped polysilicon layer, P2, as shown in Figure 5a. The width and thickness of the L-shaped arms are 8 µm based on the simulations results obtained in Figure 3 and 1.5 µm based on the PolyMUMPs fabrication process, respectively. These four arms are connected to four anchors on all four sides of the micromirror as shown in Figure 5b. Each anchor that connects to the L-shaped arm and holds the micromirror is 50 µm in length and 50 µm in width. The three fixed bottom electrodes are made of the first doped polysilicon layer in PolyMUMPs, P0, with a thickness of 0.5 µm. These three fixed bottom electrodes are equal in dimension, which is 10 µm wide, 400 µm long and 0.5 µm thick, and are separated by an equal distance of 8 µm from each other based on the results obtained and presented in Figure 4. The corresponding upward deflection is shown in Figure 5c which consequently results in an upward movement of the micromirror attached to the L-shaped arm. A gap of 2.75 µm is achieved through combining the first and second oxide layers, O1 and O2, and by employing an additional etching steps to remove the middle polysilicon layer, P1, in the fabrication process. The cross-sectional view of the designed micromirror generated using MEMSPro is illustrated in Figure 5d.

The designed micromirror is planned to be fabricated using PolyMUMPs fabrication process through MEMSCAP Inc. In this process, the polysilicon layers are used as the structural layers whereas the two available oxide layers are used as the sacrificial layers to create the cavity and separation between the top plate and the bottom electrode. This proposed device is designed based on utilization of seven main mask layers listed in Table 2 where the layer sequence and their thickness are predefined.
The top views of the proposed micromirror with the additional etching layer that allows for a combined O1 and O2 and hence, larger cavity gap are presented in Figure 6a,b.
The first layer in the PolyMUMPs fabrication process is an insulating layer of 0.6 µm low pressure chemical vapor deposition (LPCVD) silicon nitride that is deposited over a doped silicon substrate. The next layer is the first LPCVD polysilicon layer, P0, with a thickness of 0.5 µm that is patterned using POLY0 mask to create the fixed bottom electrode with the designed separation distance of 8 µm. The third layer is the first oxide layer, O1, which is 2 µm thick patterned and removed to open the anchor area using ANCHOR1 that is filled by P1 in the next step. This mask is negative and as such, this oxide layer remains on the rest of the device. The next structural layer is the second LPCVD polysilicon layer, P1, with a thickness of 2 µm patterned using Poly1. This mask layer is positive and therefore, the design shown in Figure 6a allows for the removal of P1 using a subsequent polysilicon etching. This layer is etched away in an attempt to combine the two available oxide layers to increase the gap. This step is then followed by the second oxide layer deposition, O2, with a thickness of 0.75 µm and patterning using POLY1_POLY2_VIA that opens an area on the anchor to be filled with P2 in the next step. The next layer is the third polysilicon layer, P2, which is 1.5 µm and is patterned to create the top plate as well as the L-shaped arms as shown in Figure 6b. The last deposited layer is the 0.5 µm gold layer that is deposited on the top plate and is used as the reflective surface of the micromirror. In this work, a gap of 2.75 µm is achieved through employing a combination of the two available sacrificial layers, O1 and O2 as described. The cross-section of the resulting device is illustrated in Figure 7.
For a fair comparison, two MEMS micromirrors with two different gap heights are designed and compared in this work. The second evaluated micromirror uses the conventional approach using PolyMUMPs process where only the first sacrificial layer, O1, is used to create a suspended top plate. Both the second deposited polysilicon, P1, and the second sacrificial layer, O2, are etched away on this design resulting in a gap height of 2 µm. All the other device physical properties, device configuration, as well as the structure of L-shaped arms and bottom electrodes remain the same.

In this paper, a MEMS micromirror actuated using a repulsive electrostatic force with an enhanced stroke level is designed and simulated. Unlike the conventional micromirrors, the proposed micromirror employs a three bottom electrodes configuration, which pushes the micromirror surface upward rather than conventional downward movement. The micromirror is designed according to the PolyMUMPs fabrication process and by combining the two available oxide layers, the air cavity between the plates can be increased to 2.75 µm. A maximum stroke of more than 5 µm is achieved in this work for an input DC bias voltage of 150 V.

N.A. manuscript preparation; A.E. reviewing, editing, and supervising. All authors have read and agreed to the published version of the manuscript.

This research was funded by the Natural Sciences and Engineering Research Council of Canada (NSERC), CMC Microsystems, and the University of Windsor. 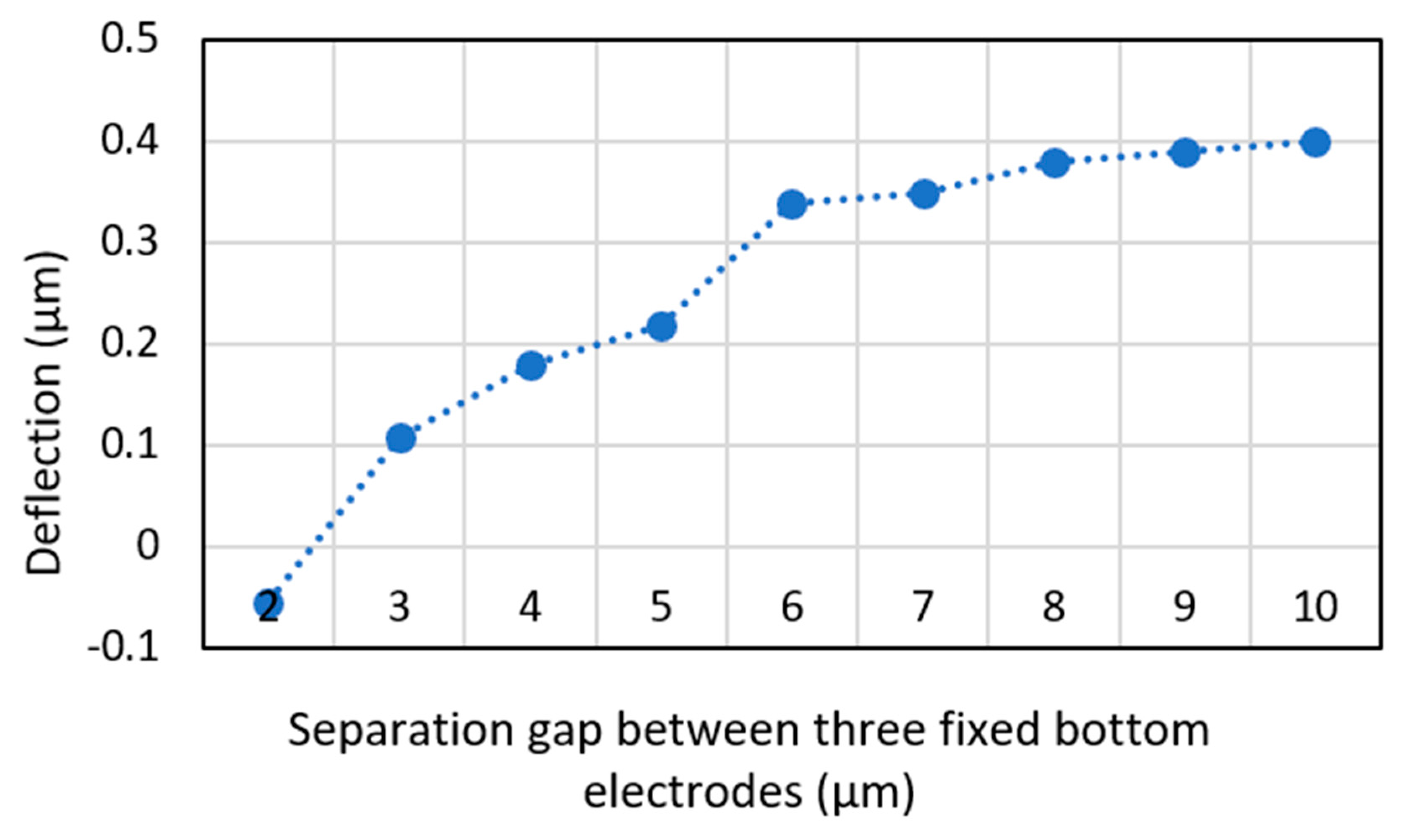 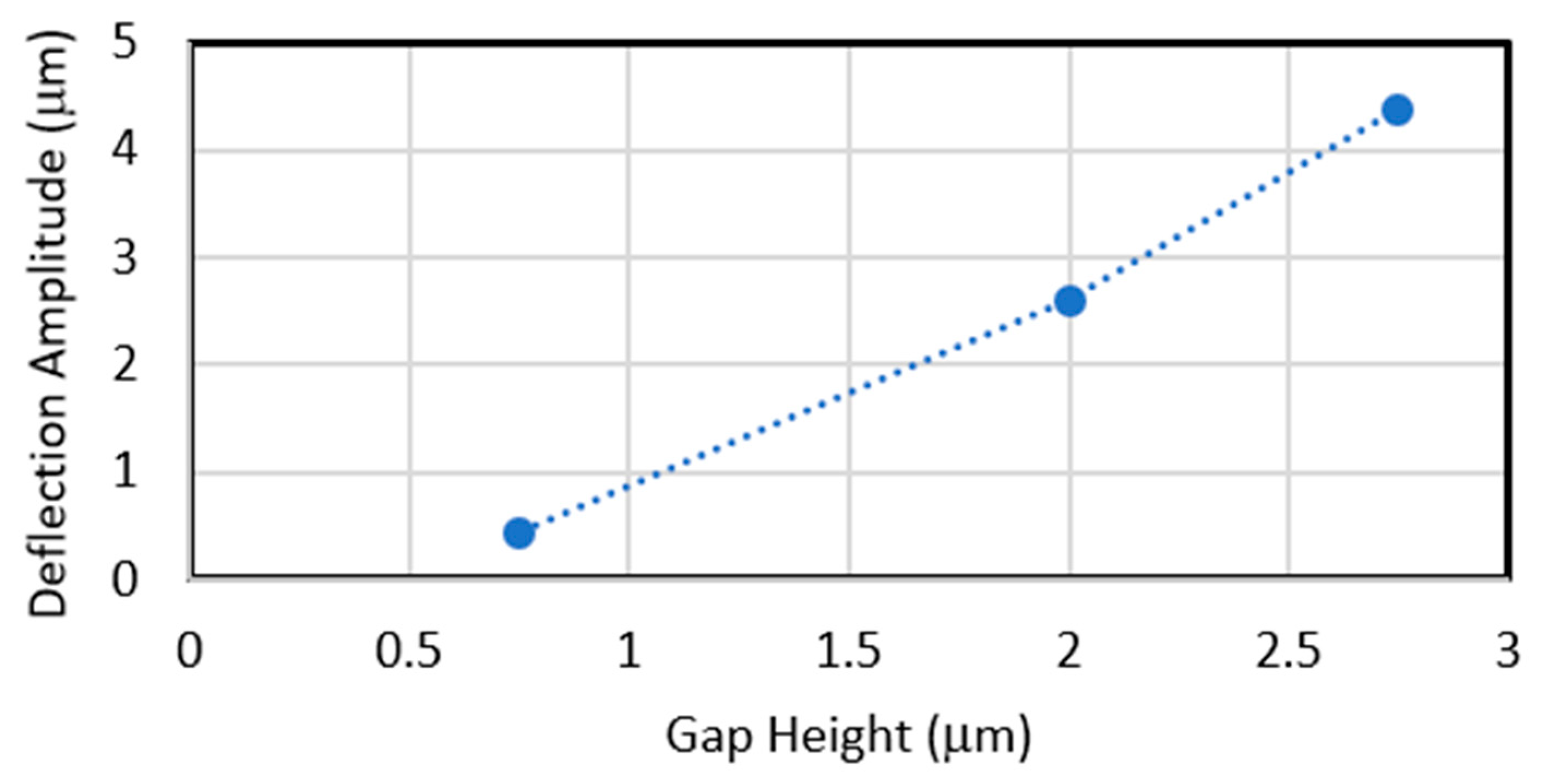