Microinjection is an established and reliable method to deliver transgenic constructs and other reagents to specific locations in C. elegans worms. Specifically, microinjection of a desired DNA construct into the distal gonad is the most widely used method to generate germ-line transformation of C. elegans. Although, current C. elegans microinjection method is effective to produce transgenic worms, it requires expensive multi degree of freedom (DOF) micromanipulator, careful injection alignment procedure and skilled operator, all of which make it slow and not suitable for scaling to high throughput. A few microfabricated microinjectors have been developed recently to address these issues. However, none of them are capable of immobilizing a freely mobile animal such as C. elegans worm using a passive immobilization mechanism. Here, a microfluidic microinjector was developed to passively immobilize a freely mobile animal such as C. elegans and simultaneously perform microinjection by using a simple and fast mechanism for needle actuation. The entire process of the microinjection takes ~30 s which includes 10 s for worm loading and aligning, 5 s needle penetration, 5 s reagent injection and 5 s worm unloading. The device is suitable for high-throughput and can be potentially used for creating transgenic C. elegans. View Full-Text
Keywords: C. elegans; microinjection; microfluidics; compliant mechanism C. elegans; microinjection; microfluidics; compliant mechanism
►▼ Show Figures 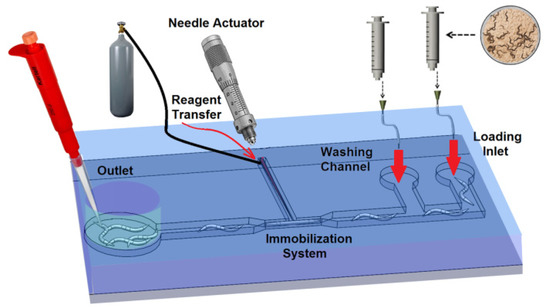