This paper presents a -Coriolis mass flow sensor with resistive readout. Instead of measuring a net displacement such as in a capacitive readout, a resistive readout detects the deformation of the suspended micro-fluidic channel. It allows for actuation at much higher amplitudes than for a capacitive readout, resulting in correspondingly larger Coriolis forces in response to fluid flow. A resistive readout can be operated in two actuation vibrational modes. A capacitive readout can only be operated in one of these two modes, which is more sensitive to external disturbances. Three types of devices have been realized. We present measurement results for all three devices. One device clearly outperforms the other two, with a flow sensitivity of 2.22 and a zero-flow stability of 0.02 over 30 min. Optimization of the metal strain gauges and/or implementation of poly-Silicon strain gauges could further improve performance.
Keywords: coriolis; flow sensor; flow; mass flow; strain gauge; resistive; resonator; channel coriolis; flow sensor; flow; mass flow; strain gauge; resistive; resonator; channel
►▼ Show Figures 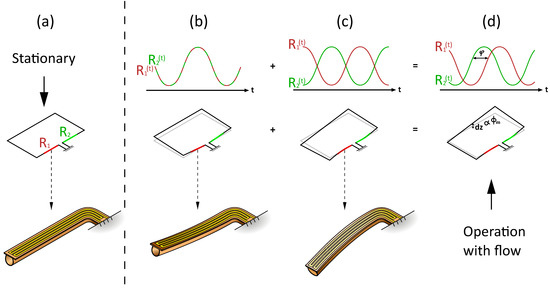