The typical morphological features of ornamental plants are specific, visually visible external features. They can directly reflect the evolutionary course and genetic relationship of plants. Therefore, they can be used as the main bases for variety identification and classification. Though comparative morphological methods are relatively simple and intuitive [1,2], plant morphology is affected not only by environmental conditions but also by gene expression [3,4]. Therefore, the accurate definition of stable, inherited morphological traits is a prerequisite for comparative morphological identification and classification. The cytological method has the characteristics of strong stability, but it can only can provide limited information [5,6,7]. It is difficult to obtain a clear classification result with this method when performing karyotype analysis between varieties [8,9,10,11]. Therefore, a large sample size is a prerequisite for cytological identification and classification. The morphological characteristics of pollen are mainly controlled by genes and have strong genetic stability. However, at present, most researchers only use scanning electron microscopy to observe the external form of pollen, and they cannot observe important classification information [12,13,14], which makes identification and classification results deviate from the results obtained by other methods. Quantitative classification methods can comprehensively analyze a large number of biological traits [15,16]. However, in the process of quantitative classification, many steps such as selected trait types, coding rules, data standardization methods, and cluster analysis methods are very subjective, which makes it difficult to compare the results with other methods [17]. Isozymes are the direct products of gene expression. The amount of enzyme bands and changes in mobility are largely determined by structural genes [18,19,20]. Therefore, the existence and expression of genes can be represented according to the isozyme phenotype. However, the polymorphism of plant isozymes is low, resulting in a poor stability. At the same time, this polymorphism is susceptible to environmental factors, sampling locations, and plant development stages [21,22]. Molecular markers have the advantages of a high stability, good repeatability, and wide distribution in the genome [23,24]. However, they are affected by factors such as sample size, the number of markers, and polymorphism. It can be seen that any classification method has its limitations. It is difficult to ensure the reliability of results when using a particular method for variety identification.
In this work, we propose an electrochemical approach for variety identification. Electrochemical methods have been widely used for analytical purpose for sensing [25,26,27,28,29,30,31,32,33,34]. The voltametric scanning of an extract of plant leaves was performed using a glassy carbon electrode. Ten varieties of Clematis were deliberately selected as investigation targets [35,36,37]. We recorded the voltammograms of Clematis under different conditions and found that different extraction solvents and buffer solutions presented different profiles. Integrating these voltammograms can be used to quickly identify varieties of Clematis. In addition, we further propose a new pattern recognition method in this work. The dendrogram deduced from the voltammograms of 10 varieties of Clematis gave a persuasive genetic relationship result with breeding records.

Leaves of Vistula, Andromeda, Danuta, Armandii ‘Apple Blossom,’ Proteus, Hagley Hybrid, Violet Elizabeth, Kiri Te Kanawa, Regina, and Veronica’s Choice were collected from Nanjing Botanical Garden Memorial Sun Yat-Sen (Nanjing, China) in April 2020. Table 1 shows all the important information for these varieties. Healthy leaves of each variety were carefully collected and stored at −20 °C before analysis. KH2PO4, Na2HPO4, sodium acetate, and acetic acid were purchased from Macklin Co., Ltd. All other chemicals were analytical-grade reagents and were used without further purification. The reference electrode (Ag/AgCl), counter electrode (Pt wire), and working electrode (glassy carbon electrode (GCE), 3 mm in diameter) were all purchased from Gaoshi Ruilian Co. Ltd. (Wuhan, China). Milli-Q water (18.2 MΩ/cm) was used throughout the experiments.
Water and ethanol were directly used as solvents for plant leaf extract preparation. As is typical, 10 mL of water or ethanol were added into 2 g of chopped plant leaf with 1 min of grinding, and then a 0.1 M acetate buffer (ABS, pH 4.5) or a 0.1 M phosphate buffer (PBS, pH 7) was added for 3 min of sonication. For electrochemical fingerprint recording, a GCE was polished with an alumina–water slurry and rinsed with ethanol and water. Then, a three-electrode system was inserted into the beaker for electrochemical fingerprint recording. All electrochemical fingerprints were recorded using a CHI760E working station. Differential pulse voltammetry was used to record the electrochemical fingerprints of all plant tissue between −0.1 and 1.5 V with a pulse amplitude of 50 mV, a pulse width of 0.05 s, and a pulse period of 0.5 s.
For scatter plot, 2D density plot, and hot map generation, the normalized current values recorded after two solvent extractions were used as the x and y axes. All figures were constructed using Origin2020.

In conclusion, the voltammograms of Vistula, Andromeda, Danuta, Armandii ‘Apple Blossom,’ Proteus, Hagley Hybrid, Violet Elizabeth, Kiri Te Kanawa, Regina, and Veronica’s Choice were recorded by a GCE using plant leaf extracts. Based on the recorded voltammograms, these varieties could be effectively identified using pattern recognition. A hot map was used for the first time for plant identification based on voltametric data. In addition, voltammograms were used for phylogenetic analysis. The dendrogram deduced from voltammograms suggests that Andromeda, Danuta, Proteus, Regina, and Hagley Hybrid are closely related, while Violet Elizabeth and Veronica’s Choice are closely related. In addition, Vistula and Armandii ‘Apple Blossom’ can be considered outliers among the varieties.

This research was funded by National Natural Science Foundation of China (31800603) and Agriculture Science and Technology Independent Innovation Fund of Jiangsu Province (CX(20)3027). 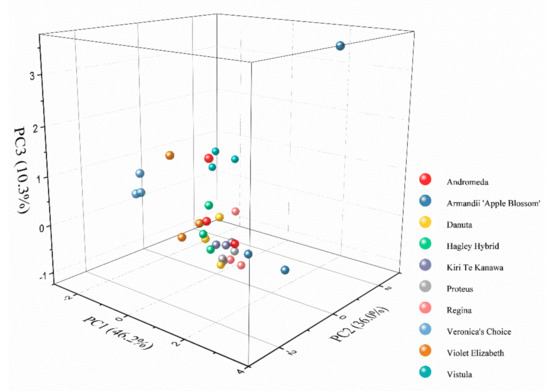 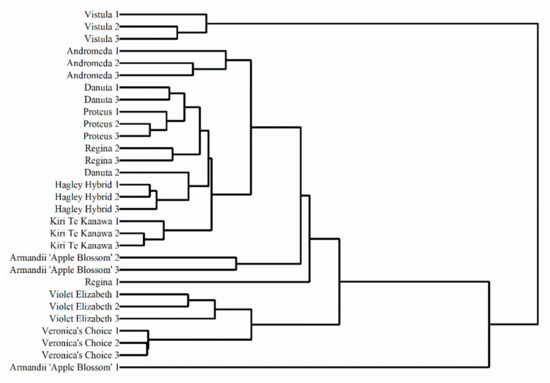