:
A single-mode optical fiber sensor uses surface plasmon resonance (SPR) with a bimetallic silver–copper (Ag–Cu) coating compared to a single layer of Ag and Cu itself. Bimetallic Ag–Cu sensors are constructed by simple fabrication on a side-polished optical fiber, followed by an electron beam evaporation of Ag and Cu films. For this investigation, the thickness of the single Ag layer was set to 30 nm and the single Cu layer was set to 30 nm; whereas for the bimetallic combined Ag–Cu layer the thickness of Ag was 7 nm and Cu 23 nm. The sensor performance was analyzed and compared experimentally and numerically using the COMSOL Multiphysics. A white light source was used with a broad optical bandwidth to provide a range of wavelengths to the optical fiber. The characteristics of the thin layers of Ag, Cu, and Ag–Cu as alcohol sensors were evaluated. We found that Cu was the most sensitive metallic layer compared to the Ag and the bimetallic Ag–Cu layers. For a 100% alcohol concentration, Cu showed a sensitivity of 425 nm/RIU followed by the bimetallic Ag–Cu layer with 108.33 nm/RIU, whereas the Ag layer was not detected. Interestingly, sensitivity reached saturation beyond the 20 nm thick layer of Ag. This shows that the Cu and the bimetallic Ag–Cu layers are suitable for an alcohol-based optical sensor.
Keywords:
D-shaped optical fiber; bimetallic layer; SPR; alcohol sensor

Gold and silver are the most widely used metals in a variety of surface plasmon resonance (SPR) optoelectronics devices [1]. The potential of SPR in surface characterization and monitoring of metal interfaces has been known since the late 1980s [2]. The first optical sensors were designed for the measurement of chemical and biological substances. Several types of optical fiber sensors have been investigated and used in various photonics communications [3,4]. They are designed to operate with interferometry and optical resonances. Such devices have used more advanced structures such as D-shaped optical fibers [5], long-period gratings [6], fiber Bragg gratings [7], as well as the photonic crystal fibers [8]. In addition, more advanced optical sensors with higher performance can be produced by integrating optical fibers and materials in the device. Surface plasmon resonance-based optical fiber technology with appropriate metal coating has also benefited from well-known innovations and flexibility in the device.
Surface plasmon resonance may be defined as the collective oscillation of free electrons on the metal-dielectric interface due to interaction with incident light. Resonance occurs when the frequencies of incoming photons and surface electrons match [9]. The incident angle, the input wavelength, the metal-dielectric functions, and the dielectric coefficient may affect the resonance conditions as can be demonstrated by the use of a prism-based SPR coupling. The use of optical fibers offers the advantages of light coupling without requiring angular adjustment of the incident light for SPR excitation. Because various metals have their own properties for specific practical sensing benefits, the use of Ag, Cu, and bimetallic Ag–Cu allow the resonance peak to be tunable, depending on the thickness of the layer and, thus, affecting the resonance of the sensor as well as the wavelength of each metal [10]. Single-mode fiber (SMF) refractive index mainly uses the fiber to passively guide light through a dielectric transducer that induces light amplitude modulation (transducer sensors).
Silver shows a sharp plasmon band in SPR and contributes greatly to sensing magnitude with better sensing resolution and is widely used in optical fiber sensors for a wide range of applications [11]. The electronic conductivity of Cu is significantly affected by the coupling effects of Ag. These can be used in various industrial applications that have been reported, for example, to produce an electrochemical sensor for the detection of 2-butanone and 1,2-dihydoxybenzene compounds [12].
The suitability of various metals used in optical fiber-based SPR has been theoretically reported by Navneet [13], who ranked the metal sensitivities by Au > Ag > Cu > Al. Copper shows the best signal-to-noise ratio (SNR) among these materials, with good_sensing performance at a thickness of 25 nm reported by Rana et al. [14]. In addition, the use of Cu as a chemical sensor offers an excellent choice as a functional biological probe [15]. Rotaru [16] has shown that Cu can be selectively metalized with double-stranded DNA on the oligonucleotide probe, which allows for the control of the cluster size and is very sensitive. As a matter of fact, the Ag-based sensor is known for its narrow spectral width but is also chemically unstable and is highly vulnerable to oxidation when used in liquid or gaseous environments.
We have experimentally demonstrated the use of both the capacity of different metals and the bimetallic combination layer to be used in an SPR optical fiber refractive index sensor at different concentrations of alcohol. The efficiency of the use of the active metallic layer covered by the oxide layer has also shown maximum sensitivity as reported by Singh et al. [17] using TiO2 followed by SiO2 and SnO2. The increased thickness also contributes to the increase in the size of the sensor as well as the additional layer to protect the metal from oxidation.
Due to the high sensitivity and high SNR, here, we observed a shift in the resonance wavelength by manipulating the refractive index of the sensing medium using Ag and Cu combined. In this work, we investigated a D-shaped SMF SPR sensor in which part of the jacket and cladding were polished in a D-shaped format and covered with a thin layer of Ag and Cu. We also assessed the best proposed thin metallic layer for the alcohol-based optical fiber sensor by keeping the polishing loss value as 1 dB and the thickness of the metal coating at 30 nm.

A standard SMF consisting of a core and a cladding with a diameter of 9/125 μm was used. The D-shaped optical fiber was polished sideways. The laser source was connected to one end of the fiber and the optical power meter to the other end. We focused only on the effect of the remaining cladding (due to the consistent polishing loss of 1 dB), where the thickness of the metal coating was fixed at 30 nm. The source used for the input light had a transmission spectra between 400–1000 nm. It was inserted into one end of the fiber and the light spread to the other end. The experimental setup is shown in Figure 5.
It can be seen that the alcohol solution could be completely and quickly eluted, as the sensor’s response to the previous response was at 100% alcohol, giving the same dip in transmission at 60% alcohol concentration. A linear regression method was employed to analyze the relationship between sensor response and refractive index changes. This method calculated the best-fitting linear equation (straight line) for the data observed using the least squares approach. The slope of the linear fit to the measured sensor response at various surrounding refractive index changes was determined as the refractive index sensitivity of the fiber sensor under investigation.
This configuration of the side-polished optical fiber included Layer I which was a core fiber made of fused silica. According to the Sellmeier dispersion law, the variation of the refractive index of the fused silica, which is dependent on wavelength, can be described in the following equation:
The wavelength () was expressed in µm and the Sellmeier coefficients were set to A1 = 0.6961663, A2 = 0.4079426, A3 = 0.8974794, B1 = 0.0684043 μm, B2 = 0.1162414 μm, and B3 = 9.896161 μm [2]. Here, the second layer (Layer II) was surrounded by a metallic layer. According to the Drude model, the dielectric constant of the metal can be described by:
Equation (7) shows two different wavelengths, λp and λc, representing the plasma and collision wavelength of the metal. The values of λp and λc for Ag were 1.4541 × 10−7 m and 1.7614 × 10−5 m, respectively. The values of λp and λc for Cu were 1.3617 × 10−7 m and 4.0852 × 10−5 m, respectively [3]. The sensing medium was referred to as Layer III. εs represents the dielectric constant of the sensing medium and has a relation of εs = ns2, where ns represents the refractive index of the sensing medium. For the excited surface plasmon wave, the resonance condition can be described by: where = , and this represents the propagation constant of the surface plasmon, where the speed of light is c, and the incident frequency is ω. With an incident light angle of θ, the left part of Equation (8) interprets the incident light propagation constant, while the right side of the equation describes the actual part of the propagation constant of the surface plasmon [4]. Therefore, the difference in the refractive index can be measured by considering changes in the resonant wavelength.

The working principle and the experimental results of the SPR-based D-shaped optical fiber refractive index sensor were presented. An SPR optical fiber refractive index transducer was designed and simulated using coatings of Ag, Cu, and Ag–Cu bimetallic combination. This study shows that each of these bimetallic combination coatings can produce an SPR peak and serve as an alcohol sensor better than our previous work in which a single metallic layer of Ag was used as an alcohol sensor. Copper showed the highest sensitivity, consistently tested with a 20% alcohol concentration. At higher alcohol concentrations, the resonant wavelength showed a blue shift, and a longer operating range can be achieved. The SPR side-polished fiber sensor presented here has several distinct advantages, such as a simple design and structure, low fabrication costs, and high biochemical performance. We conclude that the properties of the metal deposited on the optical fiber sensor can be controlled by selecting the metal as a single or bimetallic layer.

This study was designed, directed and coordinated by R.Z., as the principal investigator, provided conceptual and technical guidance for all aspects of the project. N.A.M.Z., S.A.R. and S.A.K.A. performed the optical fiber experimental and analyzed the data with T.A. and A.S. K.A. and I.S.A. performed the simulation and analyzed accordingly to the experimental findings. The manuscript was written by S.A.R. and commented by all authors. All authors have read and agreed to the published version of the manuscript.

The work was supported by the University of Malaya (FRGS grant no. FP034-2017A). 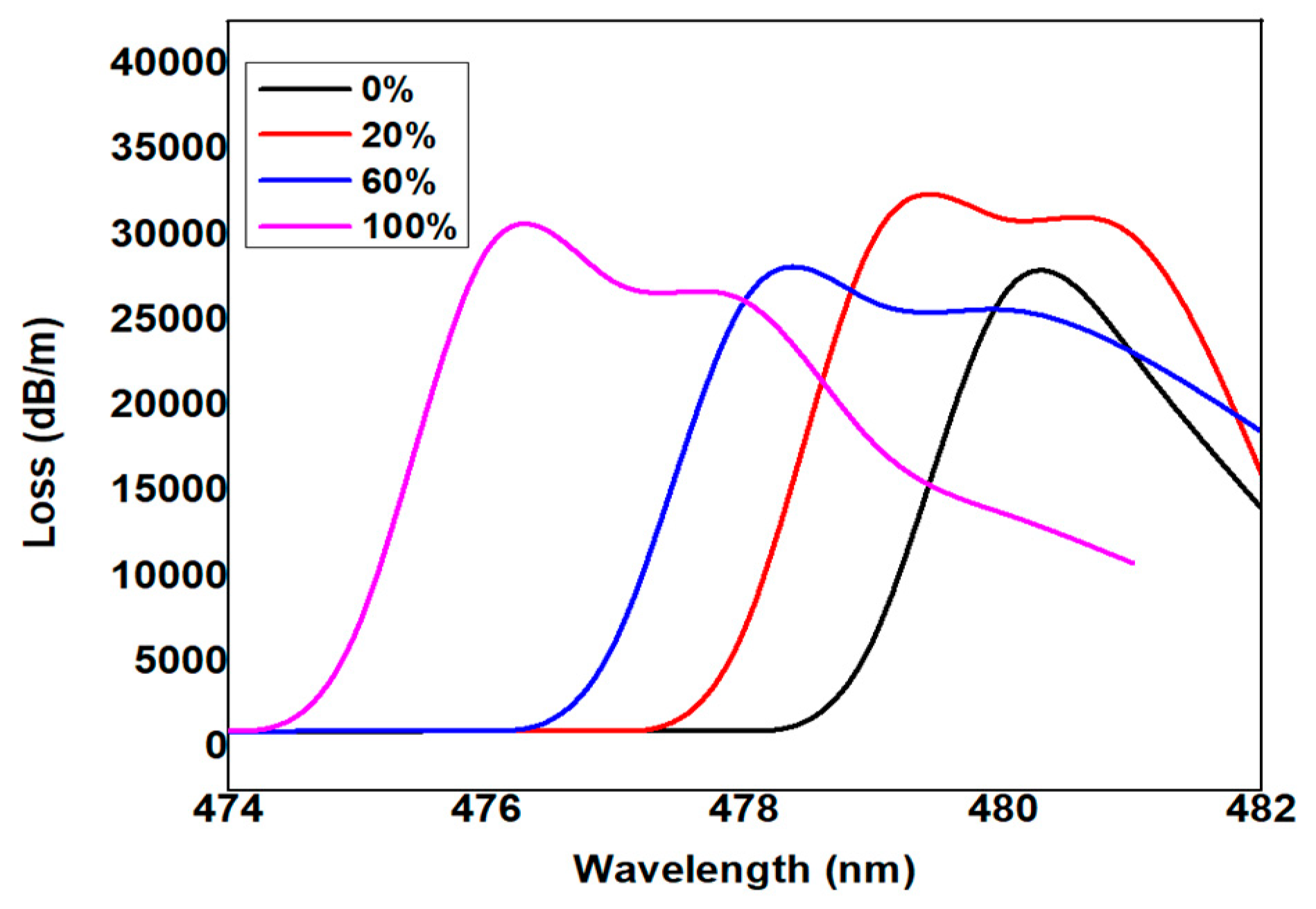 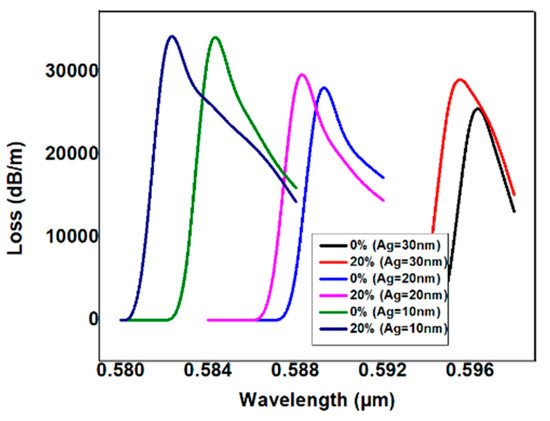 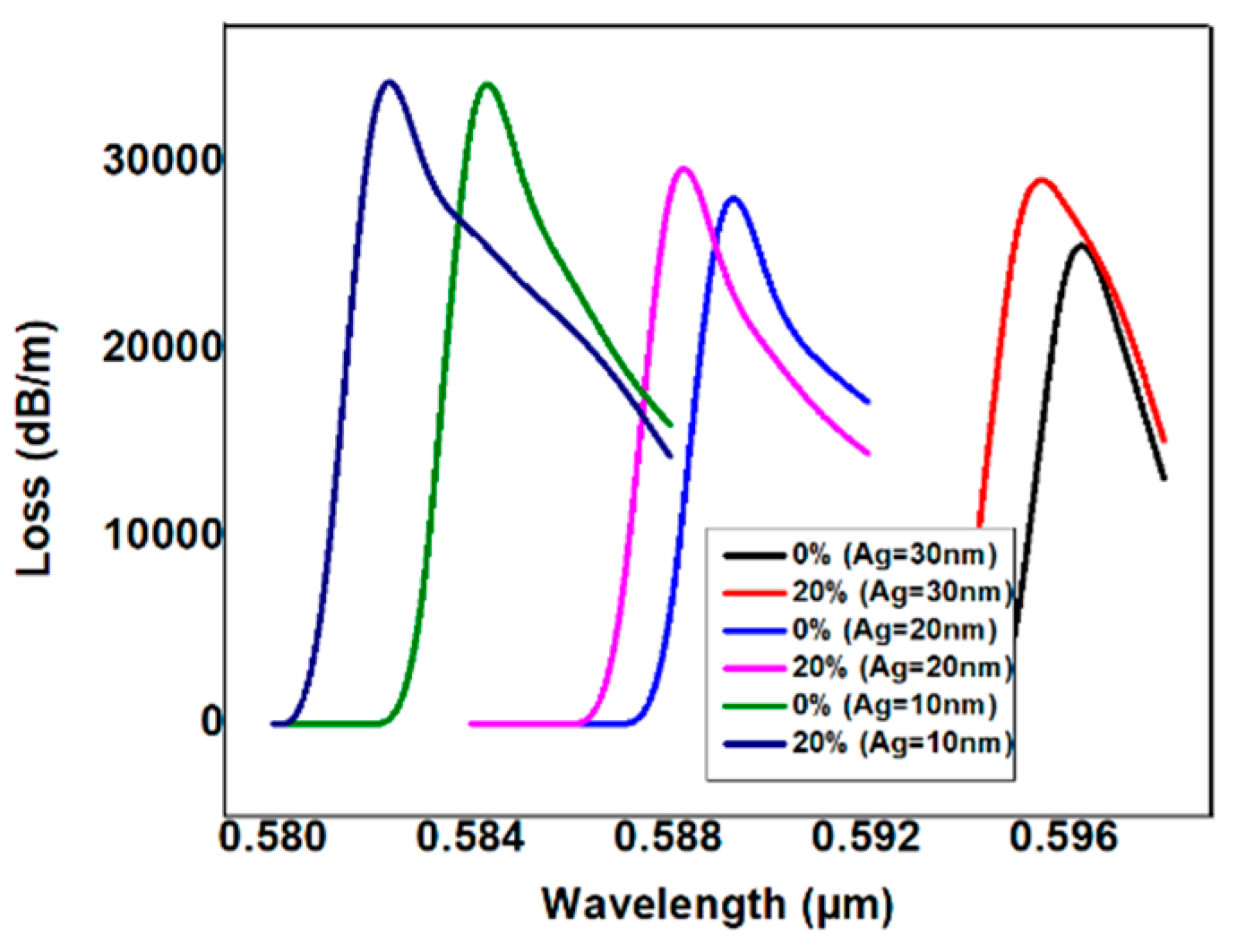 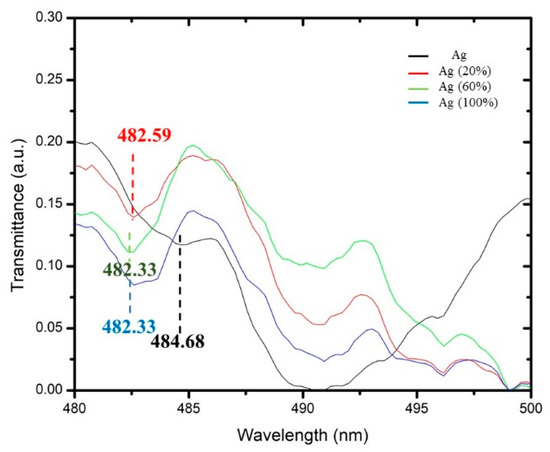 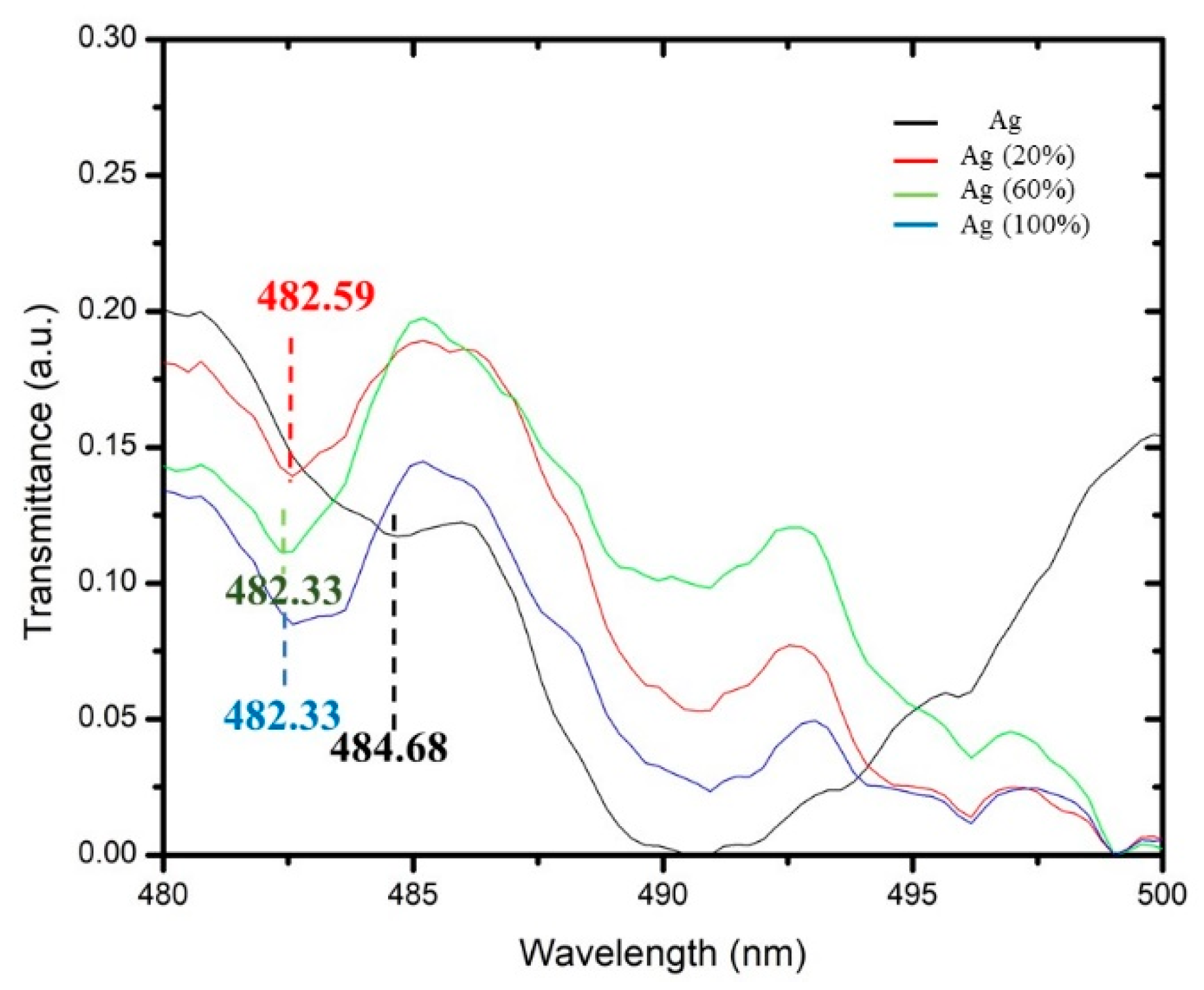 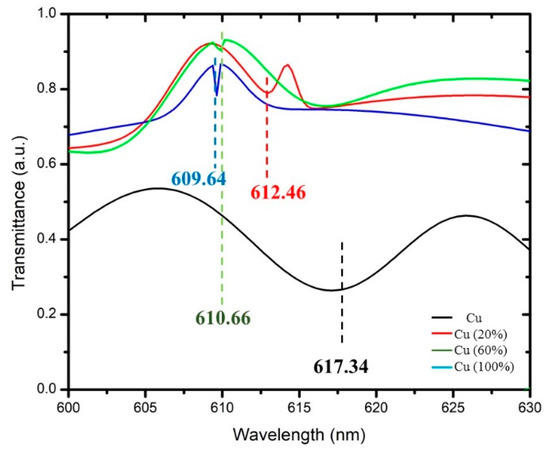 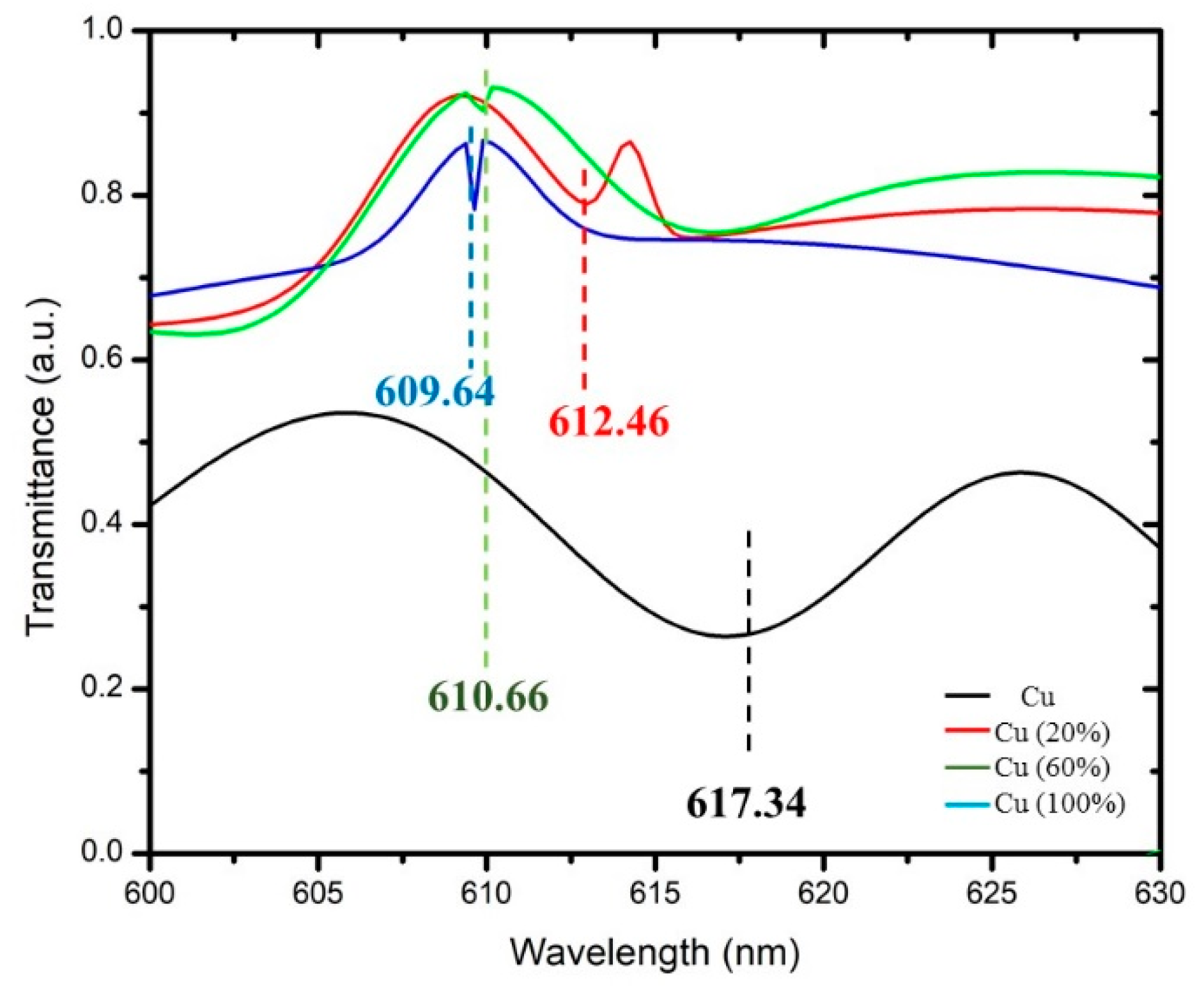 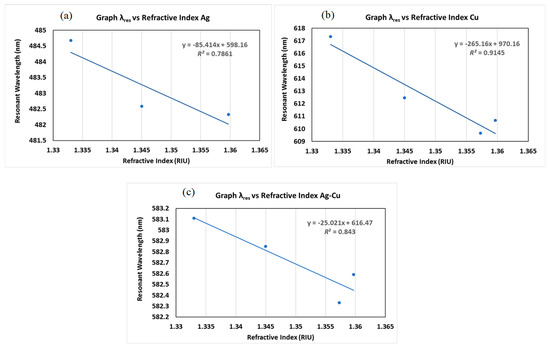 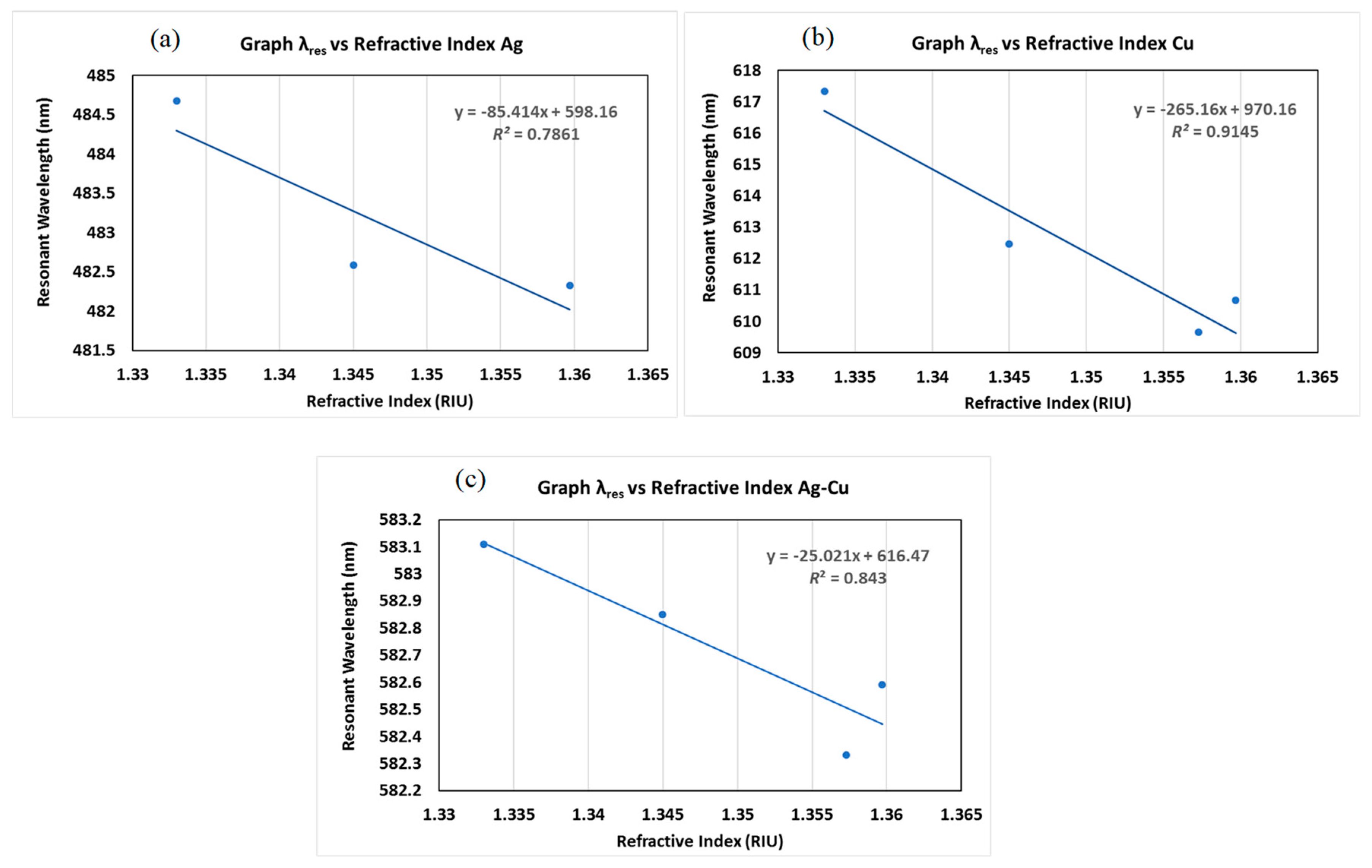