Microbial Detoxification of Deoxynivalenol (DON), Assessed via a Lemna minor L. Bioassay, through Biotransformation to 3-epi-DON and 3-epi-DOM-1
Previous Article in Journal

Cyclopiazonic acid (α-cyclopiazonic acid, α-CPA) is an indole-hydrindane-tetramic acid neurotoxin produced by various fungal species, including the notorious food and feed contaminant Aspergillus flavus. Despite its discovery in A. flavus cultures approximately 40 years ago, its contribution to the A. flavus mycotoxin burden is consistently minimized by our focus on the more potent carcinogenic aflatoxins also produced by this fungus. Here, we report the screening and identification of several CPA-type alkaloids not previously found in A. flavus cultures. Our identifications of these CPA-type alkaloids are based on a dereplication strategy involving accurate mass high resolution mass spectrometry data and a careful study of the α-CPA fragmentation pattern. In total, 22 CPA-type alkaloids were identified in extracts from the A. flavus strains examined. Of these metabolites, 13 have been previously reported in other fungi, though this is the first report of their existence in A. flavus. Two of our metabolite discoveries, 11,12-dehydro α-CPA and 3-hydroxy-2-oxo CPA, have never been reported for any organism. The conspicuous presence of CPA and its numerous derivatives in A. flavus cultures raises concerns about the long-term and cumulative toxicological effects of these fungal secondary metabolites and their contributions to the entire A. flavus mycotoxin problem. View Full-Text
Keywords: cyclopiazonic acid; ergot-like alkaloid; dereplication; HRMS cyclopiazonic acid; ergot-like alkaloid; dereplication; HRMS
►▼ Show Figures 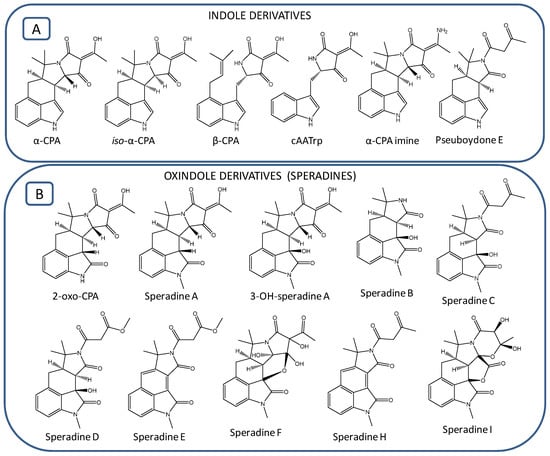