A Theoretical Study of 8-Chloro-9-Hydroxy-Aflatoxin B1, the Conversion Product of Aflatoxin B1 by Neutral Electrolyzed Water

Theoretical studies of 8-chloro-9-hydroxy-aflatoxin B1 (2) were carried out by Density Functional Theory (DFT). This molecule is the reaction product of the treatment of aflatoxin B1 (1) with hypochlorous acid, from neutral electrolyzed water. Determination of the structural, electronic and spectroscopic properties of the reaction product allowed its theoretical characterization. In order to elucidate the formation process of 2, two reaction pathways were evaluated—the first one considering only ionic species (Cl+ and OH−) and the second one taking into account the entire hypochlorous acid molecule (HOCl). Both pathways were studied theoretically in gas and solution phases. In the first suggested pathway, the reaction involves the addition of chlorenium ion to 1 forming a non-classic carbocation assisted by anchimeric effect of the nearest aromatic system, and then a nucleophilic attack to the intermediate by the hydroxide ion. In the second studied pathway, as a first step, the attack of the double bond from the furanic moiety of 1 to the hypochlorous acid is considered, accomplishing the same non-classical carbocation, and again in the second step, a nucleophilic attack by the hydroxide ion. In order to validate both reaction pathways, the atomic charges, the highest occupied molecular orbital and the lowest unoccupied molecular orbital were obtained for both substrate and product. The corresponding data imply that the C9 atom is the more suitable site of the substrate to interact with the hydroxide ion. It was demonstrated by theoretical calculations that a vicinal and anti chlorohydrin is produced in the terminal furan ring. Data of the studied compound indicate an important reduction in the cytotoxic and genotoxic potential of the target molecule, as demonstrated previously by our research group using different in vitro assays. View Full-Text
Keywords: Density Functional Theory (DFT); B3LYP; OSIRIS-Property-Explorer; neutral electrolyzed water; aflatoxin B1; 8-chloro-9-hydroxy-aflatoxin B1; quantum chemistry Density Functional Theory (DFT); B3LYP; OSIRIS-Property-Explorer; neutral electrolyzed water; aflatoxin B1; 8-chloro-9-hydroxy-aflatoxin B1; quantum chemistry
►▼ Show Figures 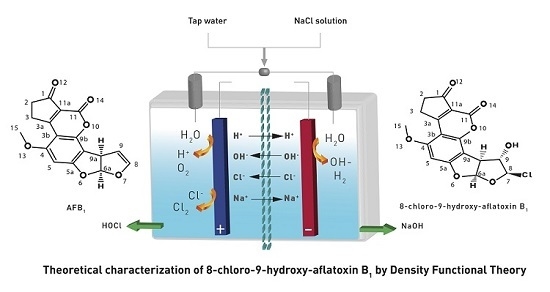