Comments on “Screening and Identification of Novel Ochratoxin A-Producing Fungi from Grapes. Toxins 2016, 8, 333”—In Reporting Ochratoxin A Production from Strains of Aspergillus, Penicillium and Talaromyces
Previous Article in Journal

Screening and Identification of Novel Ochratoxin A-Producing Fungi from Grapes

Ochratoxin A (OTA) displays nephrotoxicity and hepatotoxicity. However, in the acute toxicity rat model, there is no evidence on the relationship between OTA and nephrotoxicity and hepatotoxicity. Based on this, the integrated analysis of physiological status, damage biomarkers, oxidative stress, and DNA damage were performed. After OTA treatment, the body weight decreased and AST, ALP, TP, and BUN levels in serum increased. Hydropic degeneration, swelling, vacuolization, and partial drop occurred in proximal tubule epithelial cells. PCNA and Kim-1 were dose-dependently increased in the kidney, but Cox-2 expression and proliferation were not found in the liver. In OTA-treated kidneys, the mRNA expressions of Kim-1, Cox-2, Lcn2, and Clu were dose-dependently increased. The mRNA expressions of Vim and Cox-2 were decreased in OTA-treated livers. Some oxidative stress indicators were altered in the kidneys (ROS and SOD) and livers (SOD and GSH). DNA damage and oxidative DNA damage were not found. In conclusion, there is a limited link between oxidative stress and OTA-induced renal injury in an acute toxicity rat model. View Full-Text
Keywords: Ochratoxin A; acute toxicity; nephrotoxicity; oxidative stress; DNA damage Ochratoxin A; acute toxicity; nephrotoxicity; oxidative stress; DNA damage
►▼ Show Figures 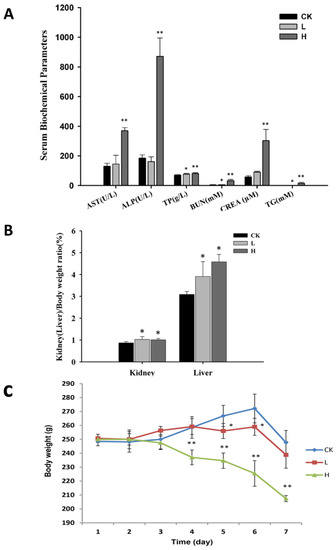