Are Treated Celiac Patients at Risk for Mycotoxins? An Italian Case-Study
Previous Article in Journal

Venom Gland Transcriptomic and Proteomic Analyses of the Enigmatic Scorpion Superstitionia donensis (Scorpiones: Superstitioniidae), with Insights on the Evolution of Its Venom Components
Previous Article in Special Issue

Type B trichotecens such as deoxynivalenol (DON), 3-acetyldeoxynivalenol (3-ADON), 15-acetyldeoxynivalenol (15-ADON), nivalenol (NIV) and zearalenone (ZEN) are mycotoxins contaminating wheat and wheat dust. Mycotoxins are toxic upon ingestion and considered potentially toxic when inhaled. Whereas dietary exposure to mycotoxins is controlled in food, data on occupational exposure by inhalation by grain workers are scarce. The objectives of this study were to determine the incidence of DON, 3-ADON, 15-ADON, NIV and ZEN in aerosols generated during grain harvesting and unloading and the risk of exposure of grain workers. Aerosols were collected during the threshing of 78 winter wheat fields and grain unloading of 59 grain lots in six grain terminals in the Vaud region (Switzerland). The samples represented the diversity of the winter wheat cultivar and of the farming system (88 treated with fungicides, 46 untreated). Using a HPLC MS/MS method developed to quantify mycotoxins in aerosols, we report that the mycotoxin content of aerosols was not affected by the wheat cultivars or farming system, but that the incidence of the mycotoxins differed between activities. While wheat harvesting generated on average 28, 20 and 1 ng·m−3 of DON, NIV and ZEN, respectively, grain unloading generated 53, 46 and 4 ng·m−3. Personal sampling revealed that working in a cab was an efficient protective measure. However, it was not sufficient to avoid chronic exposure to multiple mycotoxins. The most exposed activity was the cleaning, exposing workers to DON, NIV and ZEN at concentrations as high as 65, 59 and 3 ng·m−3. These data provide valuable information for future studies of mycotoxin toxicity at relevant concentrations on respiratory health. View Full-Text
Keywords: mycotoxins; exposure assessment; aerosols; grain dust; wheat; LC-MS/MS mycotoxins; exposure assessment; aerosols; grain dust; wheat; LC-MS/MS
►▼ Show Figures 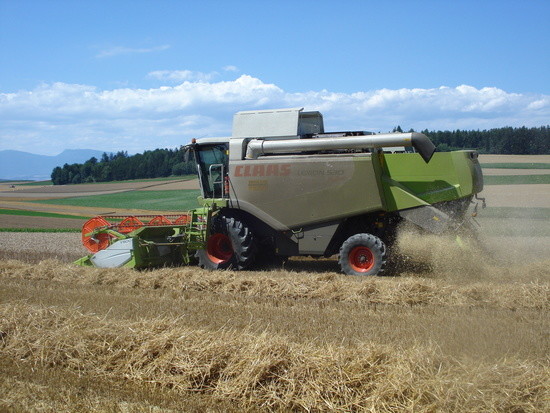