Evolution of the Cytolytic Pore-Forming Proteins (Actinoporins) in Sea Anemones

Sea anemones (Cnidaria, Anthozoa, and Actiniaria) use toxic peptides to incapacitate and immobilize prey and to deter potential predators. Their toxin arsenal is complex, targeting a variety of functionally important protein complexes and macromolecules involved in cellular homeostasis. Among these, actinoporins are one of the better characterized toxins; these venom proteins form a pore in cellular membranes containing sphingomyelin. We used a combined bioinformatic and phylogenetic approach to investigate how actinoporins have evolved across three superfamilies of sea anemones (Actinioidea, Metridioidea, and Actinostoloidea). Our analysis identified 90 candidate actinoporins across 20 species. We also found clusters of six actinoporin-like genes in five species of sea anemone (Nematostella vectensis, Stomphia coccinea, Epiactis japonica, Heteractis crispa, and Diadumene leucolena); these actinoporin-like sequences resembled actinoporins but have a higher sequence similarity with toxins from fungi, cone snails, and Hydra. Comparative analysis of the candidate actinoporins highlighted variable and conserved regions within actinoporins that may pertain to functional variation. Although multiple residues are involved in initiating sphingomyelin recognition and membrane binding, there is a high rate of replacement for a specific tryptophan with leucine (W112L) and other hydrophobic residues. Residues thought to be involved with oligomerization were variable, while those forming the phosphocholine (POC) binding site and the N-terminal region involved with cell membrane penetration were highly conserved. View Full-Text
Keywords: Cnidaria; toxin; target recognition; cytolysins Cnidaria; toxin; target recognition; cytolysins
►▼ Show Figures 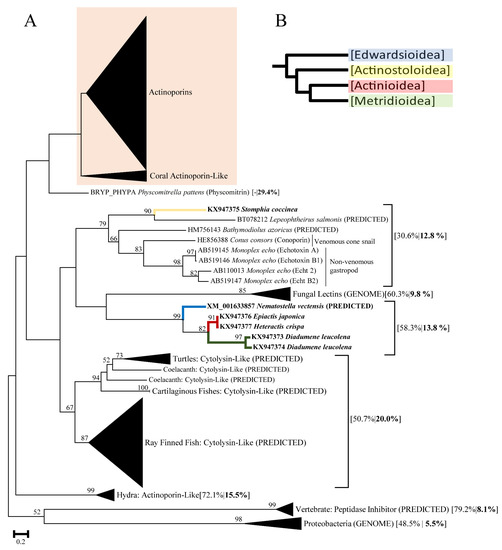