Priority Actions and Progress to Substantially and Sustainably Reduce the Mortality, Morbidity and Socioeconomic Burden of Tropical Snakebite
Previous Article in Journal

Insights into the Hypertensive Effects of Tityus serrulatus Scorpion Venom: Purification of an Angiotensin-Converting Enzyme-Like Peptidase

The number of cases of envenomation by scorpions has grown significantly in Brazil since 2007, with the most severe cases being caused by the Tityus serrulatus scorpion. Although envenomed patients mostly suffer neurotoxic manifestations, other symptoms, such as hypertension, cannot be exclusively attributed to neurotoxins. Omics analyses have detected plentiful amounts of metalloproteases in T. serrulatus venom. However, the roles played by these enzymes in envenomation are still unclear. Endeavoring to investigate the functions of scorpion venom proteases, we describe here for the first time an Angiotensin I-Converting Enzyme-like peptidase (ACE-like) purified from T. serrulatus venom. The crude venom cleaved natural and fluorescent substrates and these activities were inhibited by captopril. Regarding the serum neutralization, the scorpion antivenom was more effective at blocking the ACE-like activity than arachnid antivenom, although neither completely inhibited the venom cleavage action, even at higher doses. ACE-like was purified from the venom after three chromatographic steps and its identity was confirmed by mass spectrometric and transcriptomic analyses. Bioinformatics analysis showed homology between the ACE-like transcript sequences from Tityus spp. and human testis ACE. These findings advance our understanding of T. serrulatus venom components and may improve treatment of envenomation victims, as ACE-like may contribute to envenomation symptoms, especially the resulting hypertension. View Full-Text
Keywords: ACE-like; Tityus serrulatus venom; proteases; antivenom; hypertension ACE-like; Tityus serrulatus venom; proteases; antivenom; hypertension
►▼ Show Figures 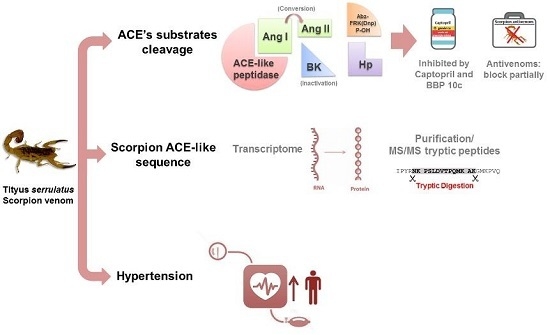