Protective Effects of Sporoderm-Broken Spores of Ganderma lucidum on Growth Performance, Antioxidant Capacity and Immune Function of Broiler Chickens Exposed to Low Level of Aflatoxin B1

The Possible Mechanisms Involved in Degradation of Patulin by Pichia caribbica

In this work, we examined the mechanisms involved in the degradation of patulin by Pichia caribbica. Our results indicate that cell-free filtrate of P. caribbica reduced patutlin content. The heat-killed cells could not degrade patulin. However, the live cells significantly reduced the concentration of the patulin. In furtherance to this, it was observed that patulin was not detected in the broken yeast cells and cell wall. The addition of cycloheximide to the P. caribbica cells decreased the capacity of degradation of patulin. Proteomics analyses revealed that patulin treatment resulted in an upregulated protein which was involved in metabolism and stress response processes. Our results suggested that the mechanism of degradation of patulin by P. caribbica was not absorption; the presence of patulin can induce P. caribbica to produce associated intracellular and extracellular enzymes, both of which have the ability to degrade patulin. The result provides a new possible method that used the enzymes produced by yeast to detoxify patulin in food and feed. View Full-Text
Keywords: mycotoxin; patulin; biodegradation; Pichia caribbica; proteomics; intracellular and extracellular enzymes mycotoxin; patulin; biodegradation; Pichia caribbica; proteomics; intracellular and extracellular enzymes
►▼ Show Figures 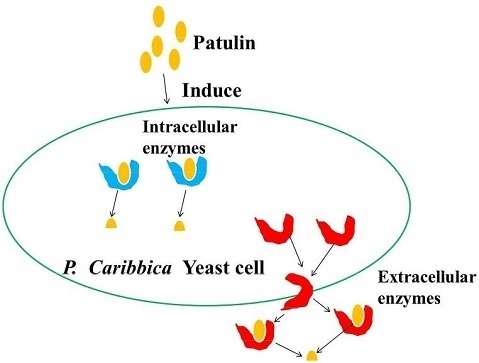