Culture-Independent Study of the Late-Stage of a Bloom of the Toxic Dinoflagellate Ostreopsis cf. ovata: Preliminary Findings Suggest Genetic Differences at the Sub-Species Level and Allow ITS2 Structure Characterization

Revealing the Function and the Structural Model of Ts4: Insights into the “Non-Toxic” Toxin from Tityus serrulatus Venom

The toxin, previously described as a “non-toxic” toxin, was isolated from the scorpion venom of Tityus serrulatus (Ts), responsible for the most severe and the highest number of accidents in Brazil. In this study, the subtype specificity and selectivity of Ts4 was investigated using six mammalian Nav channels (Nav1.2→Nav1.6 and Nav1.8) and two insect Nav channels (DmNav1 and BgNav). The electrophysiological assays showed that Ts4 specifically inhibited the fast inactivation of Nav1.6 channels, the most abundant sodium channel expressed in the adult central nervous system, and can no longer be classified as a “non-toxic peptide”. Based on the results, we could classify the Ts4 as a classical α-toxin. The Ts4 3D-structural model was built based on the solved X-ray Ts1 3D-structure, the major toxin from Ts venom with which it shares high sequence identity (65.57%). The Ts4 model revealed a flattened triangular shape constituted by three-stranded antiparallel β-sheet and one α-helix stabilized by four disulfide bonds. The absence of a Lys in the first amino acid residue of the N-terminal of Ts4 is probably the main responsible for its low toxicity. Other key amino acid residues important to the toxicity of α- and β-toxins are discussed here. View Full-Text
Keywords: Tityus serrulatus; Nav1.6; envenomation; scorpion toxin; sodium channel Tityus serrulatus; Nav1.6; envenomation; scorpion toxin; sodium channel
►▼ Show Figures 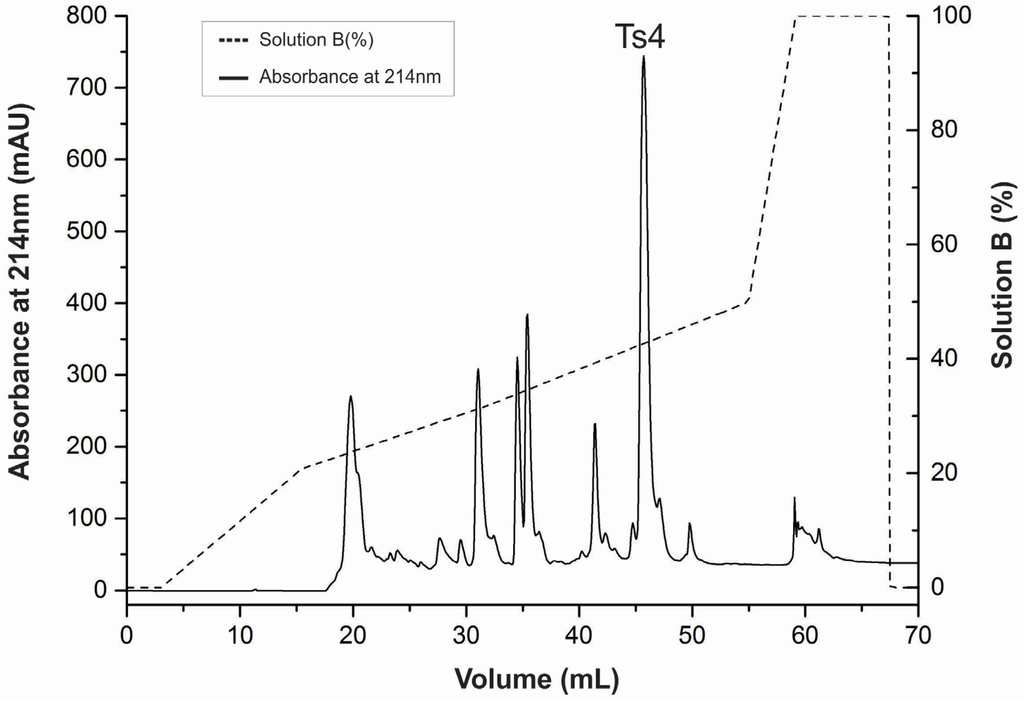