Revealing the Function and the Structural Model of Ts4: Insights into the “Non-Toxic” Toxin from Tityus serrulatus Venom

The inhibitor cystine knot (ICK) is an unusual three-disulfide architecture in which one of the disulfide bonds bisects a loop formed by the two other disulfide bridges and the intervening sections of the protein backbone. Peptides containing an ICK motif are frequently considered to have high levels of thermal, chemical and enzymatic stability due to cross-bracing provided by the disulfide bonds. Experimental studies supporting this contention are rare, in particular for spider-venom toxins, which represent the largest diversity of ICK peptides. We used ω-hexatoxin-Hv1a (Hv1a), an insecticidal toxin from the deadly Australian funnel-web spider, as a model system to examine the contribution of the cystine knot to the stability of ICK peptides. We show that Hv1a is highly stable when subjected to temperatures up to 75 °C, pH values as low as 1, and various organic solvents. Moreover, Hv1a was highly resistant to digestion by proteinase K and when incubated in insect hemolymph and human plasma. We demonstrate that the ICK motif is essential for the remarkable stability of Hv1a, with the peptide’s stability being dramatically reduced when the disulfide bonds are eliminated. Thus, this study demonstrates that the ICK motif significantly enhances the chemical and thermal stability of spider-venom peptides and provides them with a high level of protease resistance. This study also provides guidance to the conditions under which Hv1a could be stored and deployed as a bioinsecticide. View Full-Text
Keywords: inhibitor cystine knot; physicochemical stability; spider toxin; insecticidal toxin; ω-hexatoxin-Hv1a; thermal stability; proteolytic degradation inhibitor cystine knot; physicochemical stability; spider toxin; insecticidal toxin; ω-hexatoxin-Hv1a; thermal stability; proteolytic degradation
►▼ Show Figures 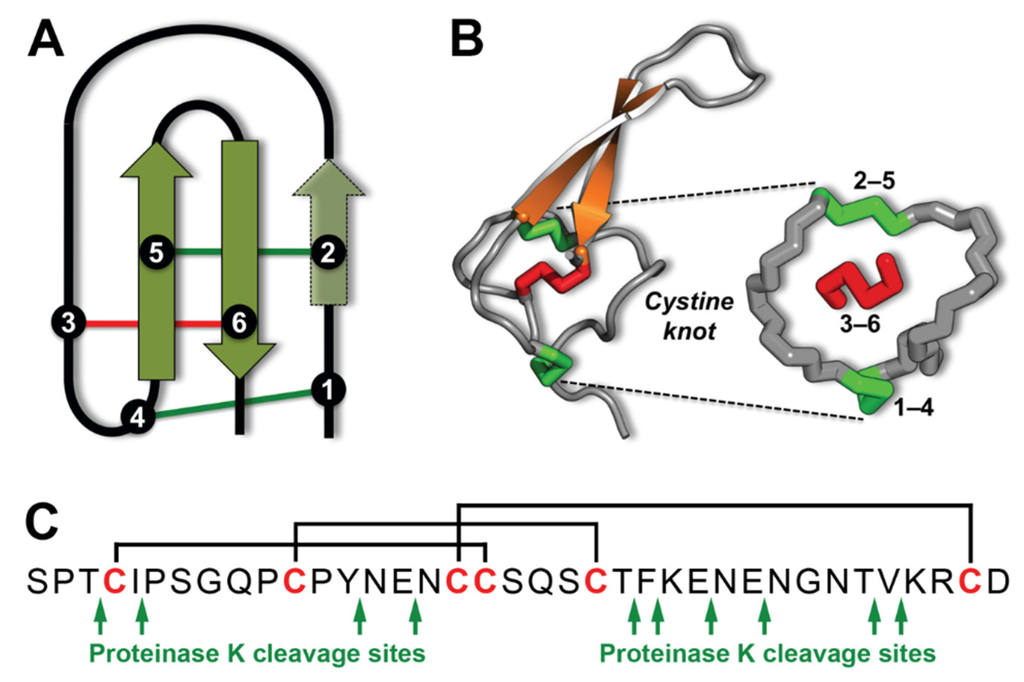