Fusarium goolgardi, isolated from the grass tree Xanthorrhoea glauca in natural ecosystems of Australia, is closely related to fusaria that produce a subgroup of trichothecene (type A) mycotoxins that lack a carbonyl group at carbon atom 8 (C-8). Mass spectrometric analysis revealed that F. goolgardi isolates produce type A trichothecenes, but exhibited one of two chemotypes. Some isolates (50%) produced multiple type A trichothecenes, including 4,15-diacetoxyscirpenol (DAS), neosolaniol (NEO), 8-acetylneosolaniol (Ac-NEO) and T-2 toxin (DAS-NEO-T2 chemotype). Other isolates (50%) produced only DAS (DAS chemotype). In the phylogenies inferred from DNA sequences of genes encoding the RNA polymerase II largest (RPB1) and second largest (RPB2) subunits as well as the trichothecene biosynthetic genes (TRI), F. goolgardi isolates were resolved as a monophyletic clade, distinct from other type A trichothecene-producing species. However, the relationships of F. goolgardi to the other species varied depending on whether phylogenies were inferred from RPB1 and RPB2, the 12-gene TRI cluster, the two-gene TRI1-TRI16 locus, or the single-gene TRI101 locus. Phylogenies based on different TRI loci resolved isolates with different chemotypes into distinct clades, even though only the TRI1-TRI16 locus is responsible for structural variation at C-8. Sequence analysis indicated that TRI1 and TRI16 are functional in F. goolgardi isolates with the DAS-NEO-T2 chemotype, but non-functional in isolates with DAS chemotype due to the presence of premature stop codons caused by a point mutation. View Full-Text
Keywords: DNA sequence; phylogenetics; evolution; mycotoxins metabolite profile DNA sequence; phylogenetics; evolution; mycotoxins metabolite profile
►▼ Show Figures 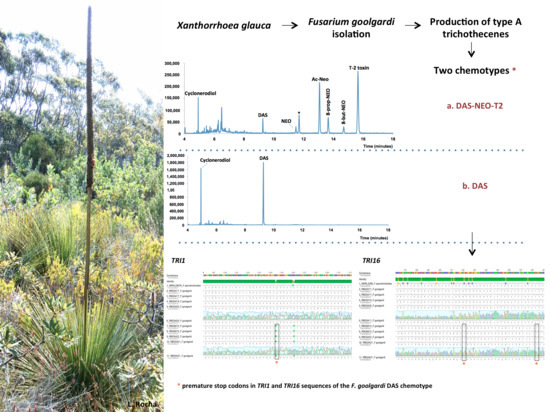