Effects of Fraxinellone on the Midgut Enzyme Activities of the 5th Instar Larvae of Oriental Armyworm, Mythimna separata Walker
Next Article in Special Issue

Downregulation and Mutation of a Cadherin Gene Associated with Cry1Ac Resistance in the Asian Corn Borer, Ostrinia furnacalis (Guenée)

Two colonies of Asian corn borer, Ostrinia furnacalis (Guenée), artificially selected from a Bt-susceptible colony (ACB-BtS) for resistance to Cry1Ab (ACB-AbR) and Cry1Ac (ACB-AcR) toxins, were used to analyze inheritance patterns of resistance to Cry1 toxins. ACB-AbR and ACB-AcR evolved significant levels of resistance, with resistance ratios (RR) of 39-fold and 78.8-fold to Cry1Ab and Cry1Ac, respectively. The susceptibility of ACB-AbR larvae to Cry1Ac and Cry1F toxins, which had not previously been exposed, were significantly reduced, being >113-fold and 48-fold, respectively. Similarly, susceptibility of ACB-AcR larvae to Cry1Ab and Cry1F were also significantly reduced (RR > nine-fold, RR > 18-fold, respectively), indicating cross-resistance among Cry1Ab, Cry1Ac, and Cry1F toxins. However, ACB-AbR and ACB-AcR larvae were equally susceptible to Cry1Ie as were ACB-BtS larvae, indicating no cross-resistance between Cry1Ie and Cry1Ab or Cry1Ac toxins; this may provide considerable benefits in preventing or delaying the evolution of resistance in ACB to Cry1Ab and Cry1Ac toxins. Backcrossing studies indicated that resistance to Cry1Ab toxin was polygenic in ACB-AbR, but monogenic in ACB-AcR, whilst resistance to Cry1Ac toxin was primarily monogenic in both ACB-AbR and ACB-AcR, but polygenic as resistance increased. View Full-Text
Keywords: Ostrinia furnacalis; Cry1 toxins; cross-resistance; resistance inheritance Ostrinia furnacalis; Cry1 toxins; cross-resistance; resistance inheritance
►▼ Show Figures 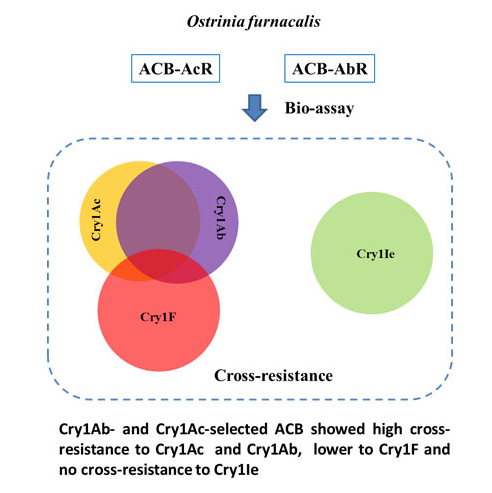