On the market since 1996, genetically modified plants expressing an insecticidal toxin (Cry toxin stemmed from Bacillus thuringiensis) target several lepidopteran and coleopteran pests. In this study, we assessed the impact of two varieties of Bt maize producing different toxins (Cry1Ab or Cry1Fa, respectively) on the biology of a storage pest: Plodia interpunctella (Hübner) (Lepidoptera: Pyralidae). The Indianmeal moths were susceptible to both toxins but showed an escape behavior only from Cry1Fa. The weight of females issued from larvae reared on Cry1Ab increased with increasing toxin concentration, but adults of both sexes reared on Cry1Fa had decreased weight. Both toxins increased development time from egg to adult regardless of sex and had no impact on the male adult lifespan. Finally, we recorded a time lag between metamorphosis from the non-Bt and the Bt diets, which increased proportionally to Cry concentration in the Bt diet. View Full-Text
Keywords: cry toxin; Bt maize; Plodia interpunctella; biological parameters cry toxin; Bt maize; Plodia interpunctella; biological parameters
►▼ Show Figures 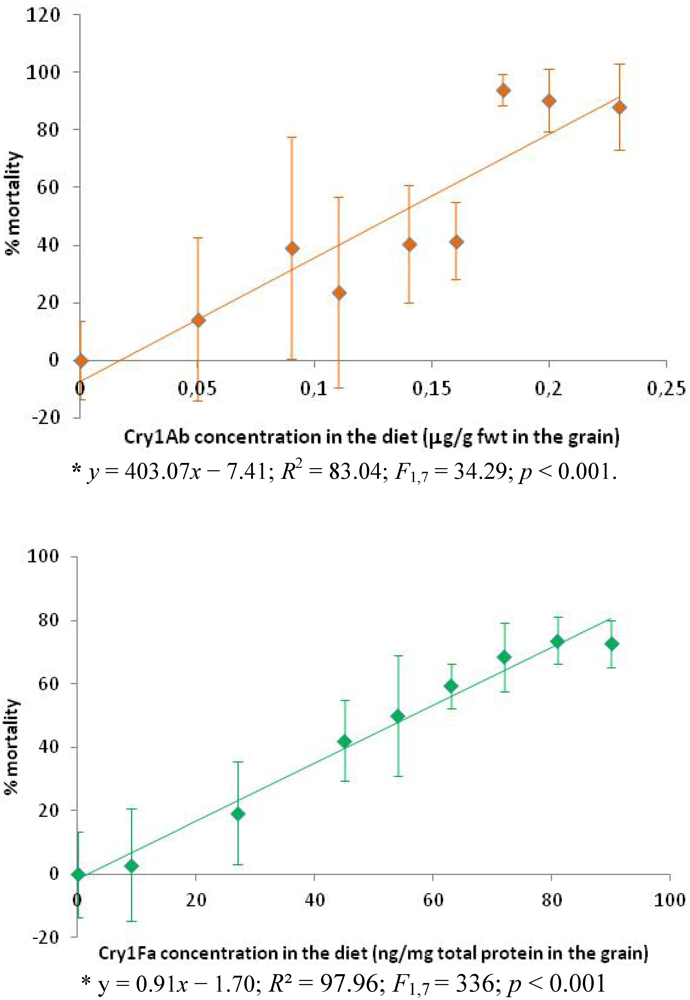 Gryspeirt, A.; Grégoire, J.-C. Effects of Two Varieties of Bacillus thuringiensis Maize on the Biology of Plodia interpunctella. Toxins 2012, 4, 373-389.


Gryspeirt A, Grégoire J-C. Effects of Two Varieties of Bacillus thuringiensis Maize on the Biology of Plodia interpunctella. Toxins. 2012; 4(5):373-389.


Gryspeirt, Aiko; Grégoire, Jean-Claude. 2012. "Effects of Two Varieties of Bacillus thuringiensis Maize on the Biology of Plodia interpunctella." Toxins 4, no. 5: 373-389.